How the body's B cell academy ensures a diverse immune response 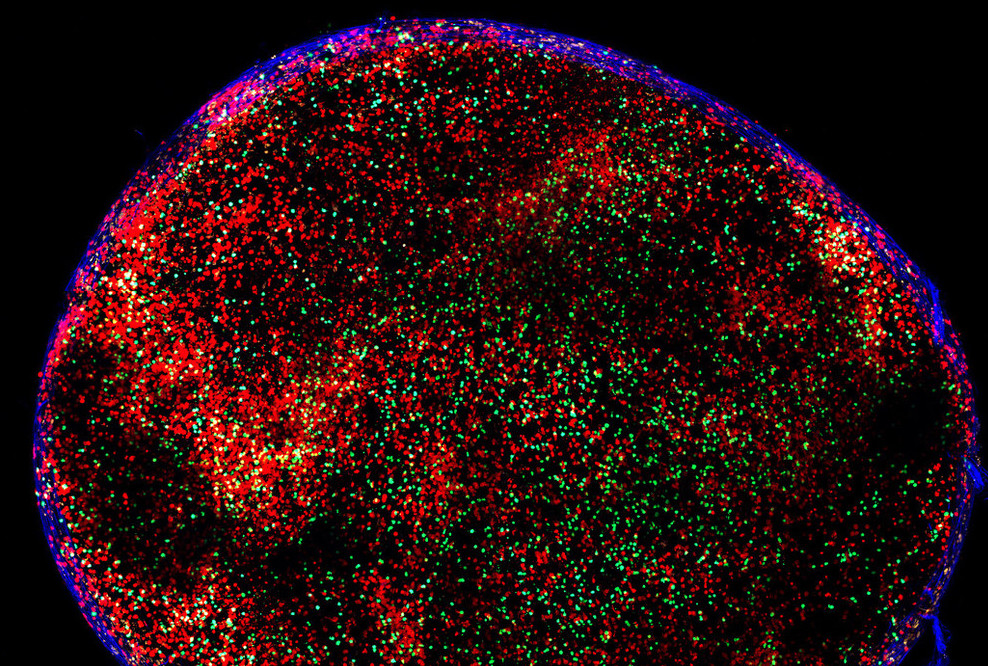 A mouse lymph node, containing B cells and T cells.

Cells jostling for a spot in a germinal center face a cutthroat admissions process. Formed after exposure to a pathogen or vaccine, germinal centers act as a kind of immune system training academy, helping B cells refine their response to the threat. Only B cells with the highest affinity for the pathogen or vaccine gain entry to these structures, where they undergo waves of mutations to produce successively stronger antibodies.

But one quirk of this process has long puzzled scientists: germinal centers appear to change the criteria for admission over time. In the later stages of a germinal center’s existence, B cells with little or no affinity for the virus flood the once exclusive site, ultimately comprising up to 30 percent of its graduates. Now, a new study in Cell describes this phenomenon in detail and suggests that high-affinity B cells—the same ones that sideline inferior B cells in the early stages—trigger this about-face in late-stage germinal centers. The findings shed new light on how the immune system mounts a response against infections such as COVID and HIV.

“Germinal centers are open structures that continuously receive B cells,” says Michel C. Nussenzweig, the Zanvil A. Cohn and Ralph M. Steinman Professor at Rockefeller. “As time goes on, the threshold for joining is lowered, and this leads to a more diverse set of responder cells.”

Inside a germinal center

For the study, Nussenzweig and colleagues tracked B cells in germinal centers in mice. They first demonstrated that, in early-stage germinal centers, B cells enter based on their ability to bind to a vaccine antigen. Since there is a limited supply of antigen in the area, high-affinity B cells (those with receptors especially adept at binding the antigen) nab an antigen and are duly admitted into the germinal center. Lower affinity B cells are left bumbling about outside.

How, then, do these low-affinity antibodies gain entry in the late-stage germinal center? Upon further investigation, the team found that, in the late-stage germinal center, elite B cells start churning out antibodies that bind to dendritic cells presenting antigen. A dense forest of antigen-antibody complexes start to clog the area, and the equivalent of a molecular traffic jam ensues. The upshot is that formerly scarce antigen is suddenly ripe for the taking. Low-affinity B cells bind whatever antigen is lying around, and that’s their ticket into the germinal center.

Paradoxically, this means that the same high-affinity B cells that shoulder low-affinity B cells out of the germinal center in the early stages ultimately set in motion the very process by which those inferior cells are ultimately admitted. “Our paper not only outlines and documents this phenomenon,” Nussenzweig says. “It shows that the mechanism by which it happens is antibody-dependent.”

In theory, introducing naive B cells into the germinal center accomplishes one of the larger goals of the immune system. “Diversity is a key feature of immunity,” Nussenzweig says. “The immune system as a whole does many things to maximize diversity, and here germinal centers are striving for a diverse immune response by lowering the threshold and letting more cells join.”

Naive B cells, which have less time to mutate when they invade the late-stage germinal center, will inevitably come out different than those elite B cells that were there all along. Whether that sort of diversity in the range of immune cells that encounter the pathogen helps or hinders depends on the virus in question. “It can be a very positive or very negative thing,” Nussenzweig says.

Take SARS-CoV-2, a virus with multiple bits of antigen (known as epitopes) that antibodies can use to identify the virus and latch on. After leaving the germinal center, naive B cells produce different antibodies than mature ones, which will attach to different epitopes—each attacking the virus from its own angle. If the virus mutates to render one antibody less effective or obsolete, the others can provide coverage. “Diversity gives you more targets, and you can make antibodies to other parts of the molecule,” Nussenzweig says. “For SARS viruses, it’s terrific, and in part responsible for our ability to fight off variants when we do get infected”

Not so with HIV, a virus with precious few epitopes. As Nussenzweig and colleagues described in a recent study, the body shuts down the production of an entire line of antibodies if it detects a surplus of minimally effective antibodies. Here, a diverse response increases the likelihood of low-affinity antibodies binding one of HIV’s only epitopes poorly, which could cause the body to take a vast component of the immune response offline. Similar antibodies that would have worked better may never be allowed to form. “For HIV, it gets in the way of an effective vaccine” Nussenzweig says.

The team hopes that their findings will inform future attempts at vaccine development, while also rounding out immunologists’ understanding of how the body responds to disease.