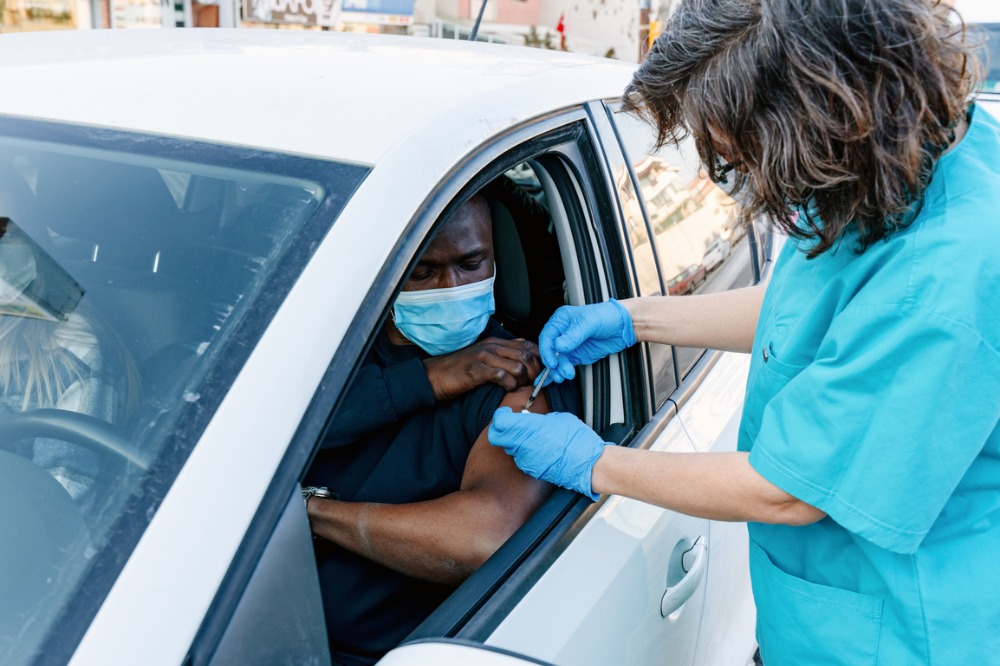 Monoclonal antibody therapies may influence the character of the body’s immune response to COVID vaccines.

Nearly three years into the pandemic, many of us now carry antibodies against the virus—due to an infection or two, a few doses of mRNA vaccine, or a round of monoclonal-antibody treatment. But not all immune responses are created equal, and how we first developed our antibodies may influence the character of our body’s response to SARS-CoV-2.

Now, a new study describes the unique immune response elicited in individuals who received monoclonal antibodies before taking two doses of an mRNA vaccine. The research, published in Nature, explores a phenomenon known as antibody feedback inhibition, known to alter immune responses to some pathogens while beneficially diversifying the body’s antibody repertoire against several others. The findings suggest that feedback inhibition increases the coverage provided by COVID vaccines in people who previously received monoclonal antibodies.

“Depending on the virus, feedback inhibition can either enhance immunity or inhibit it,” says Michel C. Nussenzweig, who co-led the study with colleagues Theodora Hatziioannou, Paul Bieniasz, and Marina Caskey. “Our results suggest that pre-existing SARS-CoV-2 antibodies can diversify the antibody response, which may increase the breadth of mRNA vaccines.”

Of guinea pigs and antibodies

Antibody feedback inhibition was first discovered at the turn of the century by pioneering epidemiologist Theobald Smith, who demonstrated that excess antibodies could inhibit the immune response to diphtheria in guinea pigs. It seemed like a curious twist—why would the same molecule that supposedly protects the animal from disease occasionally shut the immune system down?

We now know that viruses have multiple epitopes—stand-out bits of antigen that antibodies use to identify the virus and latch on to it. Once the body has produced strong antibodies for one epitope, the immune system moves on and diversifies, instead making antibodies that attach to other parts of the virus. Ideally, this increases the breadth of the immune response—if a virus mutates so that one epitope can no longer be recognized, for example, it might still be vulnerable to antibodies targeting other epitopes.

“Antibody feedback can be a very good thing,” Nussenzweig says. “You end up with a collection of neutralizing antibodies to many different parts of the virus, all of which are helpful.”

But in other cases, antibody feedback can be more harmful than helpful. HIV and influenza both have a limited number of epitopes —and if one epitope doesn’t yield very effective antibodies, a perfect storm may ensue. Upon detecting a surplus of minimally effective antibodies, the body will shut down its production of that line, inadvertently blocking the production of similar antibodies that could potentially have worked better.

“There are only a couple of places on the HIV virus that are worth targeting and, if the initial response blocks those epitopes, we won’t get a broadly neutralizing response,” Nussenzweig says.

To better understand how antibody feedback impacts COVID immunity, Nussenzweig and colleagues followed volunteers who received a single dose of monoclonal antibody treatment and, later, two doses of an mRNA vaccine. They found that these volunteers had markedly different immune responses than individuals who had received the mRNA vaccines alone.

Two doses of an mRNA COVID vaccine usually gives rise to a preponderance of memory B cells, which express antibodies that target one of three key parts of the receptor-binding domain of the spike protein, without which the coronavirus cannot infect a cell. As expected, Nussenzweig and colleagues found that about half of the antibodies obtained from individuals who received only the vaccines targeted so-called Class 1, 2, or 3 epitopes.

But only 20 percent of antibodies from volunteers who received monoclonal antibodies before the vaccine targeted one of these three epitopes. Instead, nearly 80 percent of their antibodies targeted a fourth part of the receptor-binding domain, or other epitopes altogether. The authors concluded that feedback inhibition was at work—after monoclonal antibody therapy led to the production of antibodies against Class 1, 2, or 3 epitopes, the body stopped producing those and, upon vaccination, shifted to target other epitopes. In this case, the impacts are beneficial.

“Their immune response is different, but certainly not worse,” Nussenzweig says. “In fact, individuals who received monoclonal antibodies were extremely well protected.”

The findings suggest that monoclonal antibodies received before vaccination may help diversify the immune response to COVID by increasing the breadth of mRNA vaccines. There may also be important lessons for boosting. “Because there are many targets on the receptor-binding domain that can neutralize the virus, antibody feedback is very helpful,” Nussenzweig says.

And whether the antibody surplus driving that feedback comes from monoclonal antibodies or additional vaccine booster, he says, “antibody feedback is very good for COVID.”