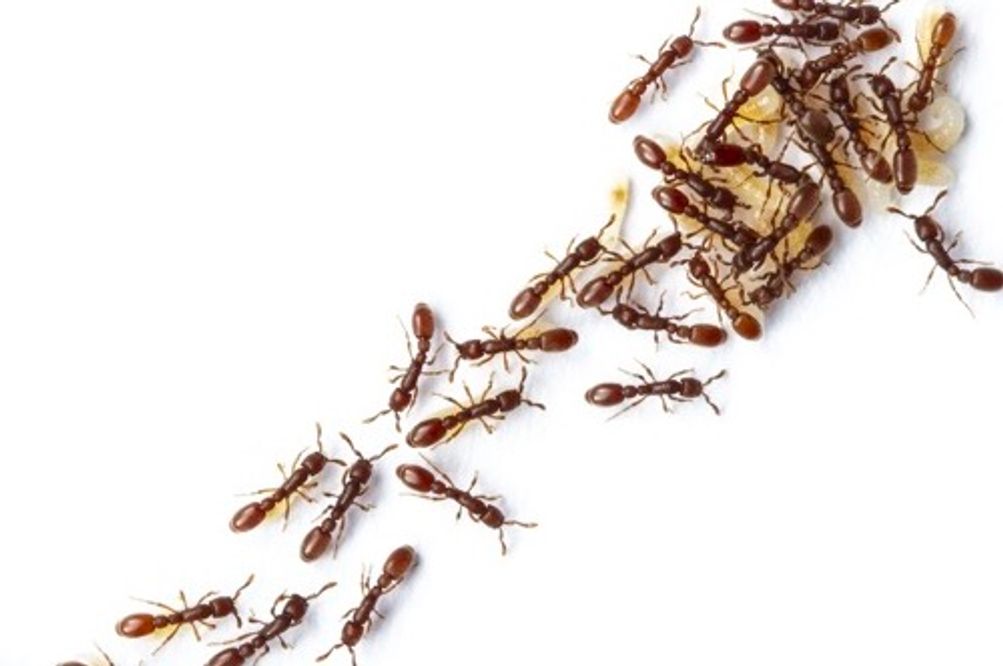 Temperatures are rising, and one colony of ants will soon have to make a collective decision. Each ant feels the rising heat beneath its feet but carries along as usual until, suddenly, the ants reverse course. The whole group rushes out as one—a decision to evacuate has been made. It is almost as if the colony of ants has a greater, collective mind.

A new study suggests that indeed, ants as a group behave similar to networks of neurons in a brain.

Rockefeller’s Daniel Kronauer and postdoctoral associate Asaf Gal developed a new experimental setup to meticulously analyze decision-making in ant colonies. As reported in the Proceedings of the National Academy of Sciences, they found that when a colony evacuates due to rising temperatures, its decision is a function of both the magnitude of the heat increase and the size of the ant group.

The findings suggest that ants combine sensory information with the parameters of their group to arrive at a group response—a process similar to neural computations giving rise to decisions.

“We pioneered an approach to understand the ant colony as a cognitive-like system that perceives inputs and then translates them into behavioral outputs,” says Kronauer, head of the Laboratory of Social Evolution and Behavior. “This is one of the first steps toward really understanding how insect societies engage in collective computation.”

At its most basic level, decision-making boils down to a series of computations meant to maximize benefits and minimize costs. For instance, in a common type of decision-making called sensory response thresholding, an animal has to detect sensory input like heat past a certain level to produce a certain costly behavior, like moving away. If the rise in temperature isn’t big enough, it won’t be worth it.

Kronauer and Gal wanted to investigate how this type of information processing occurs at the collective level, where group dynamics come into play. They developed a system in which they could precisely perturb an ant colony with controlled temperature increases. To track the behavioral responses of individual ants and the entire colony, they marked each insect with different colored dots and followed their movements with a tracking camera.

As the researchers expected, colonies of a set size of 36 workers and 18 larvae dependably evacuated their nest when the temperature hit around 34 degrees Celsius. This finding makes intuitive sense, Kronauer says, because “if you become too uncomfortable, you leave.”

However, the researchers were surprised to find that the ants were not merely responding to temperature itself. When they increased the size of the colony from 10 to 200 individuals, the temperature necessary to trigger the decision to vacate increased. Colonies of 200 individuals, for example, held out until temperatures soared past 36 degrees. “It seems that the threshold isn’t fixed. Rather, it’s an emergent property that changes depending on the group size,” Kronauer says.

Individual ants are unaware of the size of their colony, so how can their decision depend on it? He and Gal suspect that the explanation has to do with the way pheromones, the invisible messengers that pass information between ants, scale their effect when more ants are present. They use a mathematical model to show that such a mechanism is indeed plausible. But they do not know why larger colonies would require higher temperatures to pack up shop. Kronauer ventures that it could simply be that the larger the colony’s size, the more onerous it is to relocate, pushing up the critical temperature for which relocations happen.

In future studies, Kronauer and Gal hope to refine their theoretical model of the decision-making process in the ant colony by interfering with more parameters and seeing how the insects respond. For example, they can tamper with the level of pheromones in the ants’ enclosure or create genetically altered ants with different abilities to detect temperature changes. “What we’ve been able to do so far is to perturb the system and measure the output precisely,” Kronauer says. “In the long term, the idea is to reverse engineer the system to deduce its inner workings in more and more detail.”

Proceedings of the National Academy of Sciences
The emergence of a collective sensory response threshold in ant colonies
Asaf Gal and Daniel J. C. Kronauer