Linker histones tune the length and shape of chromosomes 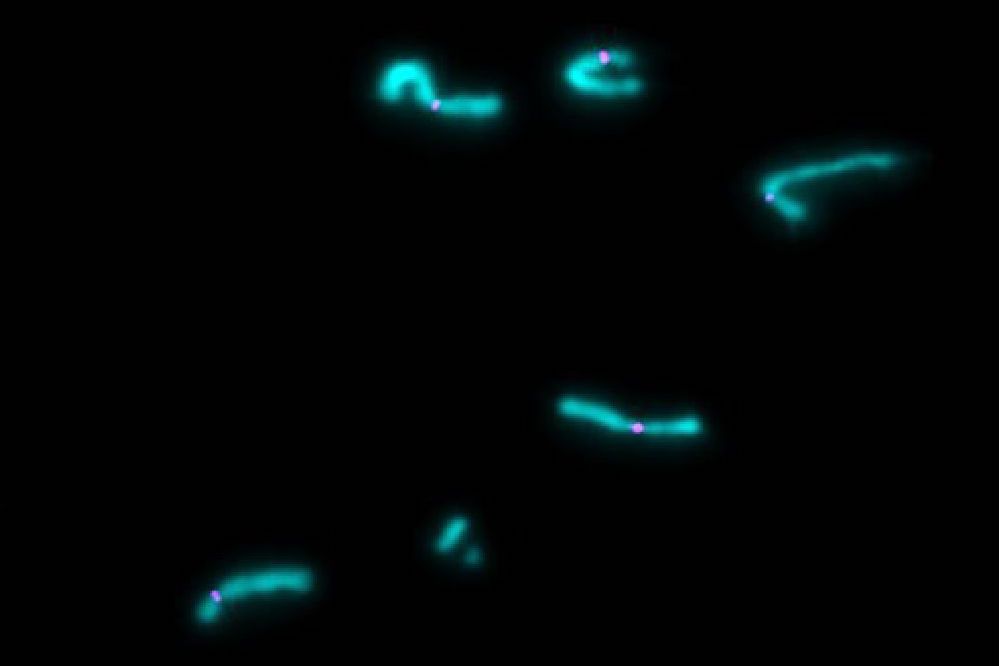 Human life hinges on the ability of our cells to cram six feet of DNA into a 10-micron nucleus—equivalent to fitting a mile of string inside one green pea. But stuffing genes into cramped quarters is only half the battle. The DNA must also remain organized, carefully coiled into loops that ensure the information remains readily accessible and not a tangled mess.

Now, new research has identified proteins called linker histones as the factor that controls whether DNA winds into long and thin chromosomes, made up of many small loops, or short and thick chromosomes with fewer large loops. The findings, published in eLife, are the first to describe how chromosome shape is tuned by linker histones at the molecular level.

“The linker histone was once thought to impact only a narrow range of the genetic material,” says Rockefeller’s Hironori Funabiki. “We have now shown that it controls the number of loops in the chromosome and its ultimate shape, a much larger regulation space than expected.”

Beyond “beads on a string”

Genetic material is organized around a nucleosome—often depicted as a bead on a string, with a length of DNA “string” wound around a central protein “bead.” The string is clamped to its bead by a sort of protein clip—the linker histone—which is also involved in folding multiple nucleosome beads into chromatin fibers. These fibers form chromosomes after they are ratcheted through a molecular motor, the condensin, that organizes chromatin into loops.

Chromosomes come in a wide range of shapes across species and cell types, largely based on the size of each chromatin loop. Funabiki draws an example from the familiar (and frustrating) experience of coiling wired earphones. If you wrap them into many tiny loops, the headphones will fit neatly into your pocket. If, however, you wind the wires into only a few large loops, the earphones form a bulky mass. Similarly, a greater number of small loops will give rise to longer, thinner chromosomes; a few large loops of chromatin will form shorter, thicker chromosomes.

Scientists knew that loop formation lay at the heart of chromosome size and shape, but how various cells tuned this process to form larger or smaller loops remained a mystery.

A new role for linker histone

Funabiki and colleagues set out to solve this mystery. Using a method developed by Job Dekker at the University of Massachusetts Medical School, the team analyzed DNA from frog eggs and found that linker histones—beyond clamping strings to beads and organizing them into fibers—also prevent condensin from binding to nucleosomes and forming chromatin loops.

A picture of loop formation began to emerge, with linker histones at the very heart of the process. Changing the shape of a chromosome, the researchers found, is a simple matter of increasing or decreasing the amount of linker histone available to inhibit condensin.

When a high concentration of linker histone blocks condensin, the protein complex is able to make fewer loops of chromatin. Since only a handful of loops are forming, there’s enough slack in the line for those loops to develop into large coils that will eventually bunch up into short, thick chromosomes. Lower concentrations of linker histone kick off the opposite process: condensin is free to form many more loops, so there is less fiber available to contribute to each loop. The result is a large number of smaller loops, which compress neatly into long, thin chromosomes.

Funabiki speculates that cells may have evolved the ability to tune chromosome length in order to speed up or slow down their growth. “The longer the chromosome is, the more time it takes to separate during cell division,” he says. “Frog eggs are exposed to dangerous environments, so speed is important. Successful reproduction depends on how quickly the eggs can turn into tadpoles and escape. Perhaps frog eggs maintain shorter chromosomes to allow for rapid cell division.”

In the future, Funabiki’s lab will explore whether linker histones play a similar role in influencing the size and shape of human chromosomes. “This initial work only involved frog eggs,” says lead author Pavan S. Choppakatla, a member of the Funabiki lab. “We are now looking at linker histones in human eggs and somatic cells, to see whether our findings are widely applicable.”

In studying cell division, scientists happened upon a new way of understanding how a chemotherapy compound works. The findings could make it possible to predict which patients are most likely to benefit from the drug.

In brief: New molecular insights on a rare immune disorder

After figuring out the functions of two proteins involved in the rare genetic condition ICF, scientists pieced together the molecular process that is altered in the disease.