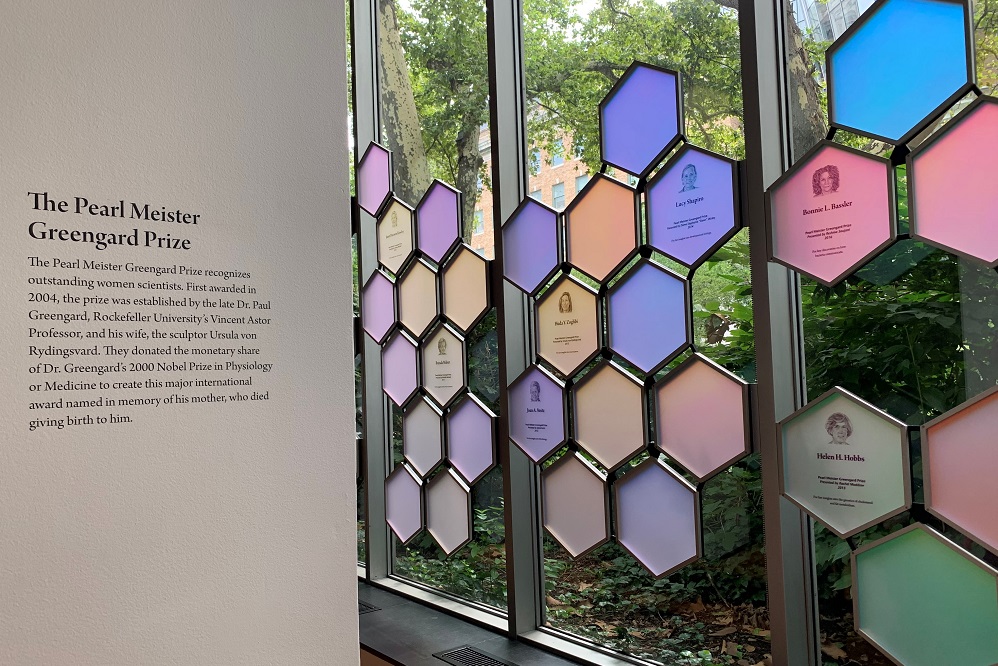 A new exhibit recognizing the winners of Rockefeller’s Pearl Meister Greengard Prize was unveiled last month in the Abby Aldrich Rockefeller Lounge. Composed of translucent, color-shifting hexagons, each with an etched portrait and citation, the exhibit spotlights the 22 outstanding women scientists honored to date with the prestigious prize. Each year, newly named awardees will be added to the tessellating mosaic exhibit designed by C&G Partners.

After winning the Nobel Prize in 2000, Rockefeller neuroscientist Paul Greengard and his wife, the sculptor Ursula von Rydingsvard, donated his entire monetary share of the award to establishing an international prize that would recognize the accomplishments of women scientists. The prize, which carries a $100,000 honorarium, was named after Greengard’s mother, Pearl Meister Greengard, who died giving birth to him.

So far, three Pearl Meister Greengard Prize awardees have gone on to receive the Nobel Prize. Elizabeth Blackburn and Carol Greider, 2008 co-recipients of the Pearl Meister Greengard Prize, shared the 2009 Nobel Prize for their discovery of how chromosomes are protected by telomeres and the enzyme telomerase. Jennifer A. Doudna, the 2018 recipient, received her Nobel Prize in 2020 for the development of CRISPR, a technique for genome editing.

“The women who have won this award over the last 17 years are all intellectual pioneers who have contributed profoundly to our fundamental understanding of the world,” says Richard P. Lifton, The Rockefeller University’s president. “It gives all of us at Rockefeller great satisfaction to see these remarkable scientists celebrated in this way.”

Each year, the university invites a woman who has achieved distinction in government, international relations, business, journalism, science, or the arts to host the award ceremony and present the prize. The 2020 ceremony, honoring Joanne Chory for her innovative use of molecular genetics to advance plant biology, was held virtually and hosted by Frances Beinecke, former president of the Natural Resources Defense Council.

Greengard, who passed away in 2019, was Rockefeller’s Vincent Astor Professor of Molecular and Cellular Neuroscience and director of The Fisher Center for Alzheimer’s Research. Ursula von Rydingsvard, who co-founded the prize with Greengard, is a world-renowned sculptor; one of her pieces is on display nearby the new exhibit in Abby Aldrich Rockefeller Lounge.

Also near the Pearl Meister Greengard Prize exhibit, on the north and south walls of the Caspary Auditorium lobby, are two new installations honoring Rockefeller scientists who have won major scientific awards and university benefactors who have given significant financial gifts to Rockefeller.