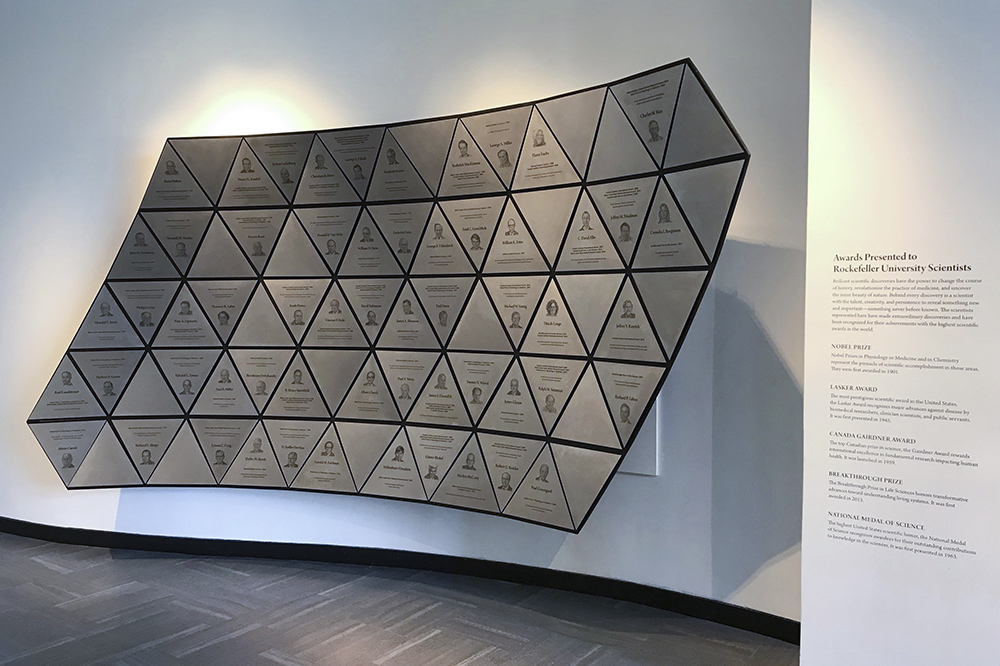 When Mike Young received a Nobel Prize in 2017, there were black-tie dinners, champagne toasts, and a trip to Sweden. There were also less glamorous events: webpages to revise, portraits to take, and, in the lobby outside Caspary Auditorium, an exhibit to update.

The Caspary award exhibit at that time honored 24 Nobel Prize winners and 23 recipients of the Albert Lasker Award. Thirty-nine scientists in all covering over a century of scientific breakthroughs and the awards they garnered. But Young took the last available spot. Thanks to the trend of Rockefeller faculty members garnering prestigious awards, it was officially full. The clock was ticking.

When it was erected in 2008, three blank spaces for future award winners seemed like enough, and there was a procedure in place to accommodate new inductees. Each time a new prize was announced, one of the six plexiglass panels would be taken down and sent out for a new stipple portrait to be digitally printed in the blank space. The wall behind, where a timeline showed the dates of awards over 100 years, would be updated.

In 2010 Jeffrey Friedman was added, in 2016 it was Charlie Rice. And then there was Mike Young. (David Allis, who won a Lasker in 2018, didn’t fit at all, making a replacement exhibit even more urgent.)

The need to commission a new design and fabricate a new exhibit provided an opportunity to reconsider how to best honor and commemorate Rockefeller award winners. Based on discussions with university leadership and an ad-hoc faculty committee formed in 2018 to steer the exhibit’s design, a proposal emerged to broaden the criteria for inclusion in the exhibit to incorporate not just recipients of the Nobel and Lasker awards, but of several other internationally prestigious scientific prizes. A firm with experience in exhibits and installations, C&G Partners, was selected to explore designs and advise on how best to use the space outside of Caspary Auditorium.

Out of several proposals C&G presented, a design based on interlocking steel triangles was selected, and then refined over several months before fabrication and installation began this winter. On January 19, the new exhibit was unveiled.

“When we began the design studies for the refreshed prize wall, we knew it had to be right for Rockefeller University. We drew inspiration from the exterior of Caspary Auditorium, a geodesic dome made of triangular elements,” says designer Jonathan Alger, managing partner at C&G.

Made of 78 stainless steel plaques arrayed neatly on a curved façade, the display honors 58 Rockefeller prizewinners who together have been recognized with 26 Nobel Prizes, 24 Lasker Awards, 19 Gairdner Awards, 5 Breakthrough Prizes, and 20 National Medals of Science. (Because some scientists have won multiple prizes, the number of prizes shown is greater than the number of populated triangles.) There are also 20 blank tiles scattered throughout the exhibit which will be used going forward to honor future award winners. It is projected that the exhibit will enjoy approximately a 25-year lifespan.

Each triangle includes a short description of the discovery the prizes honor, as well as the years of the prizes and an illustration of the scientist, drawn by hand in a “hedcut” style, best known for its longtime use in the Wall Street Journal.

“The idea to use illustrations rather than photographs is to give the tiles a uniform look and to place an emphasis on the science in addition to the scientist,” says Franklin Hoke, associate vice president of Communications and Public Affairs. “We hope viewers will come away with the impression that Rockefeller was the site of a tremendous number of prizeworthy discoveries, which is, of course, true.”

Across from the exhibit, on the lobby’s south wall, is a coordinating exhibit, also made of steel triangles, that pays tribute to 213 university benefactors who have given significant financial gifts to Rockefeller.

“We modeled these two exhibits as matching segments of a triangulated sphere,” Alger says. “The result is an exhibit that we feel is right for the location, and also absolutely unique to Rockefeller. We sized the plaques to ensure there will be plenty of room to celebrate additional prizes in the future in a fresh way—and to welcome future donors in style.”

An additional exhibit, consisting of semi-transparent hexagons, is under also under development. Located around the corner in the Abby Aldrich Rockefeller lounge, it will honor recipients of the Pearl Meister Greengard Prize—women scientists from throughout the world who have made groundbreaking discoveries in the biosciences. It will be installed in the early summer.