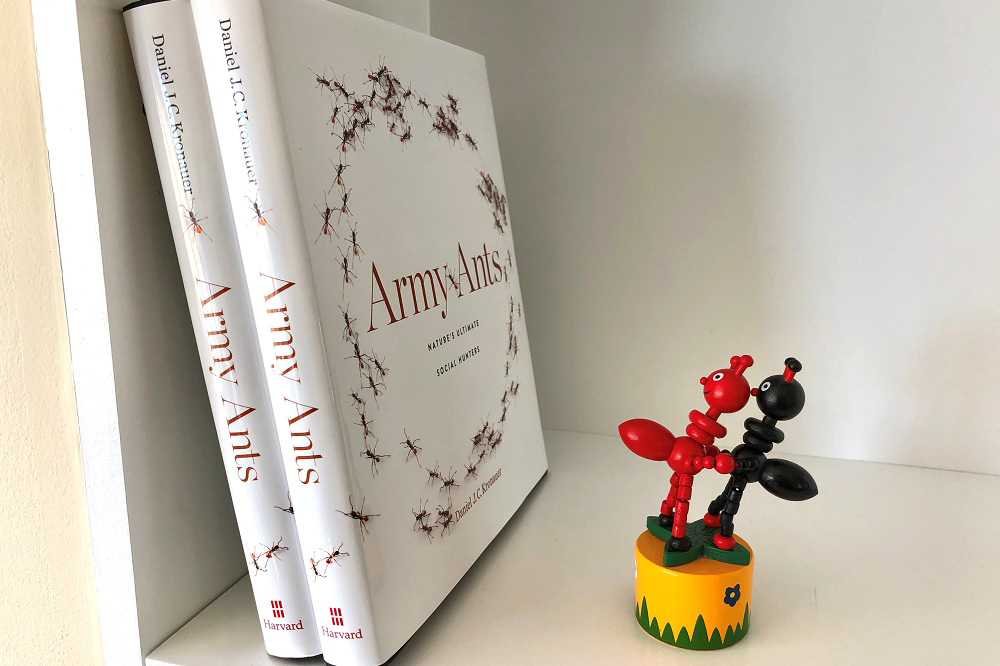 It’s the culmination of a 13-year-long pet project. When writing his Ph.D. thesis on army ants, Daniel Kronauer went above and beyond, outfitting it with a lengthy, illustrated introduction. Impressed, his mentor did what good mentors often do: He pressed his student for more. Wouldn’t it be great, the mentor suggested, if Kronauer wrote a book about these creatures, known for their formidable bite and collective hunting strategy?

We spoke with Kronauer, head of Rockefeller’s Laboratory of Social Evolution and Behavior, about his literary endeavor.

This book reads both as a collection of serious academic essays and as an engaging biography of ant explorers. Who are your readers?

I hope the book will appeal to biologists working in various fields as well as lay people with an interest in science. I wanted to write a sort of scientific treaty of the ants, complete with all the published literature on their biology. But at the same time, army ants are so cool that I felt it would be a shame not to try and reach a broader audience. And because I’m an avid ant photographer I had the opportunity to use my own images instead of scientific data plots—something that I hope will bring more readers into the fold, as well.

Indeed, there are over 100 photographs in the book. What can you tell us about the process of capturing them?

I started taking pictures of ants during my Ph.D. and have kept up this hobby ever since. Many of the photos in the book were taken in the field, which is a bit of a challenge—both because of the unfriendly terrain and because the ants are aggressive and don’t stay still.

With the help of Jim Petrillo in Rockefeller’s Precision Instrumentation Technology facility, we built a portable light box that shields the scene, so to speak. It also gives me the flexibility to maneuver flashes and get the lighting just right. This approach disturbs the ants much less and means that I don’t get bitten and stung much. Over the years, I’ve gotten a bit sensitive to the stings of army ants, so that’s certainly a plus.

Has working on the book informed your current research?

It definitely has. The writing process forces you to synthesize information in a broad way and re-read all the historical literature. This turned out to be extremely helpful, because in my field there’s a lot of really interesting information hidden in papers dating back to the late 1800s.

Some of these old articles aren’t easy to go through because each one is 40 pages or so, very different from today’s highly-condensed scientific reports. But they clarified my thinking about how different ant behaviors may have evolved and gave me new ideas for experiments. For example, I dug up some early observations about army ants and related species that people haven’t followed up on but that could be important.

What do you most want readers to know and appreciate about army ants?

Army ants are often portrayed as dangerous and destructive in literature and folklore. We tend to see them as these nomadic predatory tribes that roam through the rainforest and wreak havoc.

In reality, the story is more nuanced and interesting. Army ants have an enormous ecological impact, first recognized around 1700 by Maria Sibylla Merian and then by 19th century naturalists like Charles Darwin, Henry Walter Bates, and Thomas Belt. They are the obvious superstars of the tropical ant world, bringing in tens of thousands of prey items every day. Mostly they hunt other ants, and some species also take other arthropods, some much larger than themselves.

Moreover, they influence a wide range of other animals. For instance, many insect species, including beetles and flies, have evolved to live among army-ant colonies as so-called social parasites. Other insects that army ants eat are sent running and flying away as the swarm approaches, at which point they become prey for whole guilds of tropical birds.

If you are in the rainforest and you see army ants swarm, you’re in for an amazing show. It’s the epitome of Darwin’s metaphor of the “entangled bank” where everything in the natural world is interconnected.