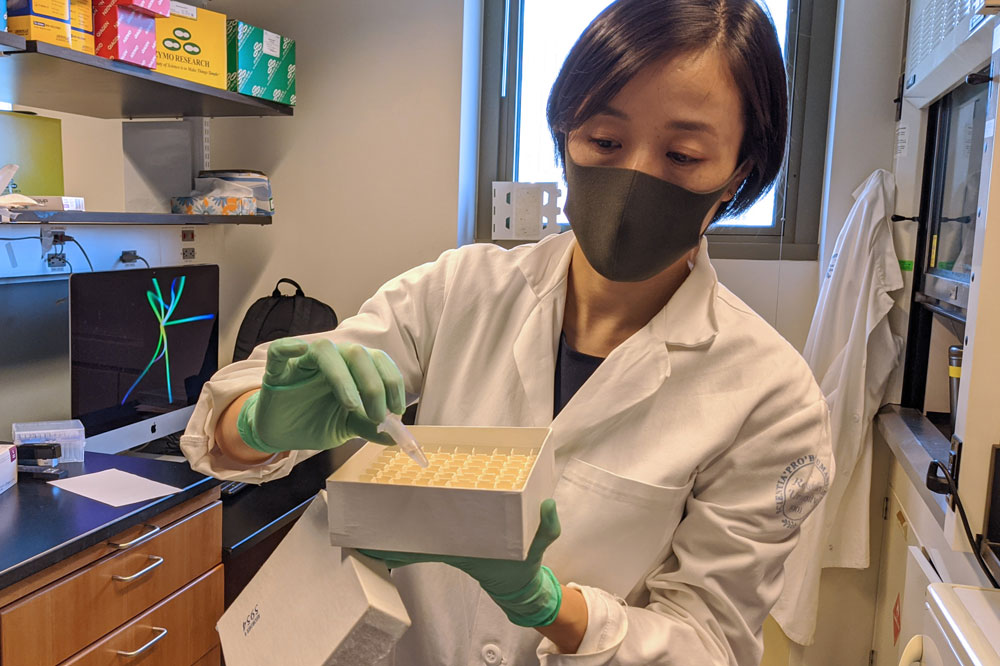 More than 10 percent of people who develop severe COVID-19 have misguided antibodies that attack not the virus, but the immune system itself, new research shows. Another 3.5 percent, at least, carry a specific kind of genetic mutation.

In both groups, the upshot is basically the same: The patients lack type I interferon, a set of 17 proteins crucial for protecting cells and the body from viruses. Whether the proteins have been neutralized by so-called auto-antibodies, or were not produced in sufficient amounts in the first place due to a faulty gene, their missing-in-action appears to be a common theme among a subgroup of COVID-19 sufferers whose disease has thus far been a mystery.

Published in two papers in Science, the findings help explain why some people develop a disease much more severe than others in their age group—including, for example, individuals who required admission to the ICU despite being in their 20s and free of underlying conditions. They may also provide the first molecular explanation for why more men than women die from the disease.

“These findings provide compelling evidence that the disruption of type I interferon is often the cause of life-threatening COVID-19,” says Jean-Laurent Casanova, head of the St. Giles Laboratory of Human Genetics of Infectious Diseases at The Rockefeller University and a Howard Hughes Medical Institute investigator. “And at least in theory, such interferon problems could be treated with existing medications and interventions.”

The findings are the first results being published out of the COVID Human Genetic Effort, an ongoing international project spanning over 50 sequencing hubs and hundreds of hospitals around the world, co-led by Casanova and Helen Su at the National Institute of Allergy and Infectious Diseases. The study participants included various nationalities from Asia, Europe, Latin America, and the Middle East. “COVID-19 may now be the best understood acute infectious disease in terms of having a molecular and genetic explanation for nearly 15 percent of critical cases across diverse ancestries,” Casanova says.

The way SARS-CoV-2 affects people differently has been puzzling. The virus can cause a symptom-free infection and go away quietly, or it can kill in a few days. Casanova’s research over the past two decades has shown that unusual susceptibility to certain infectious diseases can be traced to single-gene mutations that affect an individual’s immune response.

Since February, his team and their collaborators have been enrolling thousands of COVID-19 patients to find out whether something in their genetic make-up drives the disparate clinical outcomes the disease produces.

In one study, the researchers genetically analyzed blood samples from more than 650 patients who had been hospitalized for life-threatening pneumonia due to SARS-CoV-2, 14 percent of whom had died. They also included samples from another group of over 530 people with asymptomatic or benign infection. They initially searched for differences between the two groups across 13 genes known to be critical for the body’s defense against the influenza virus. These genes govern type I interferons.

It soon became obvious that a significant number of people with severe disease carried rare variants in these 13 genes, and more than 3 percent of them were in fact missing a functioning gene. Further experiments showed that immune cells from these patients did not produce any detectable type I interferons in response to SARS-CoV-2.

Interferons are part of the intrinsic and innate immunity, kicking in before the adaptive immune system mounts an antibody response. They are known to play an important role in immediately heightening the cells’ defenses in response to several viruses. Follow up experiments led by Rockefeller’s Charles M. Rice showed that this is also the case for SARS-CoV-2: Human fibroblast cells with mutations affecting the interferon type I pathway were more vulnerable to the virus, and died in higher numbers—and faster—than cells without those mutations.

Three other infectious diseases caused by mutations affecting an immune signaling protein can also be caused by auto-antibodies against that protein. So next, the team checked for the possibility of a similar scenario.

Examining 987 patients with life-threatening COVID-19 pneumonia, they found that more than 10 percent had auto-antibodies against interferons at the onset of their infection. The majority of them, 94 percent, were men.

Biochemical experiments confirmed these auto-antibodies can effectively curb the activity of interferon type I. In some cases, they could be detected in blood samples taken before patients became infected; in others, they were found in the early stages of the infection, before the immune system had the time to mount a response.

These auto-antibodies seem to be rare in the general population. Out of 1,227 randomly selected healthy people, only four were found to have them.

“All of these findings strongly indicate that these auto-antibodies are actually the underlying reason some people get very sick, and not the consequence of the infection,” Casanova says.

The findings point to certain medical interventions to consider for further investigation, Casanova says. For example, there are already two types of interferons available as drugs and approved for use to treat certain conditions such as chronic viral hepatitis.

The team continues to look for genetic variations that may affect other types of interferons or additional aspects of the immune response in COVID-19 outliers.

The gene hunt to explain why some young, healthy people die from COVID-19

People under 50 without preexisting conditions typically develop mild symptoms of coronavirus infection—but there are exceptions. Researchers are working to identify rare genetic variations that may explain why some in this group have succumbed to the disease.

A rare genetic change may explain why some people die from cytomegalovirus, a stealth pathogen that is often asymptomatic.

The human papilloma virus is usually kept in check by the immune system, but scientists identified a genetic variant that makes some infected children prone to developing warts in the throat.