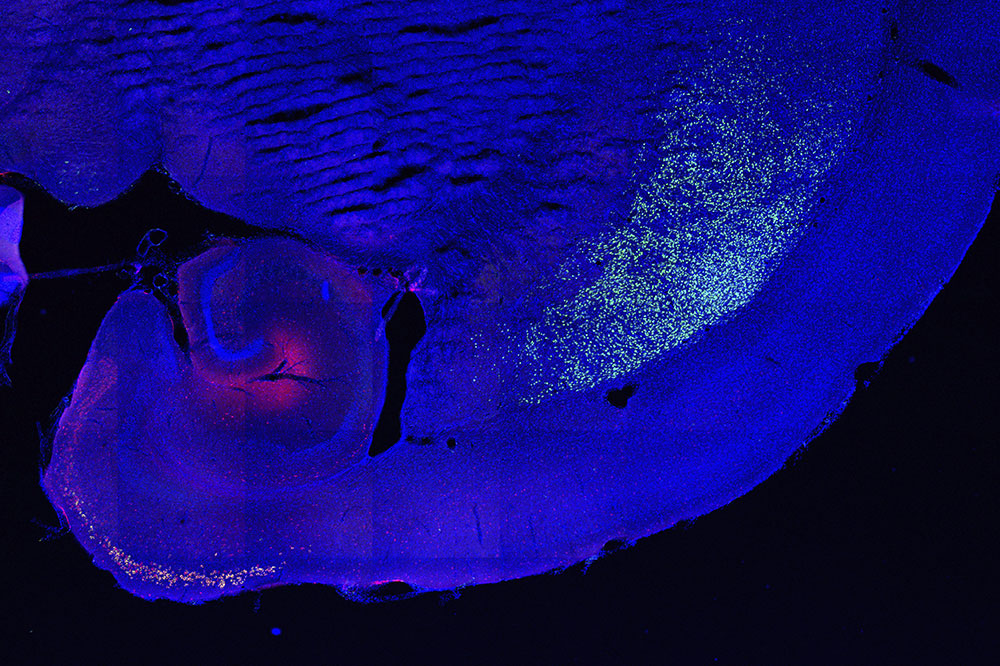 Memory-forming neurons (green) in the brain’s entorhinal cortex are the first to degenerate in Alzheimer’s disease.

When Alzheimer’s disease strikes, the entire brain doesn’t crumble at once. Instead the mind unravels like grim clockwork, beginning with the telltale degradation of a group of brain cells in the entorhinal cortex. These so-called vulnerable neurons are responsible for shuttling experiences into memories. They are always the first to go.

Figuring out why patients lose these vulnerable neurons early on could be the key to discovering novel treatments for Alzheimer’s. Now, a new study sheds light on the inner workings of this subset of neurons and describes the molecular factors that render entorhinal brain cells uniquely sensitive to degeneration.

“If we can understand the peculiarities of the brain’s most vulnerable neurons, we can potentially open up new avenues for treatment,” says Jean-Pierre Roussarie, senior research associate in the late Paul Greengard’s Laboratory of Molecular and Cellular Neuroscience, who published the findings in Neuron.

“The smushy bowl of the brain”

So far, attempts to develop a treatment for Alzheimer’s have largely failed. But most efforts undertaken have centered on the accumulation of Aβ peptides, which form plaques throughout the brain. These plaques are the first sign of Alzheimer’s, and the most studied.

The second sign of the disease is less celebrated, but may hold more promise. After the initial amyloid plaques form in the brain, a jumble of tau proteins known as neurofibrillary tangles clog the insides of neurons. Unlike amyloid plaques, this latter protein clump initially clusters solely within a distinct group of cells of the entorhinal cortex. The sheer predictability of the process makes it an attractive therapeutic target.

But until now, scientists knew little about the nuances that make vulnerable neurons tick and tangle. With that in mind, the researchers set out to catalogue the genetic factors that render entorhinal neurons uniquely vulnerable to neurofibrillary tangles.

“There has been one trial after another, and we have accumulated a huge knowledge of the mechanisms that produce amyloid plaques,” Roussarie says. “But what is going on downstream of the amyloid accumulation, and how these plaques trigger neurofibrillary tangles within vulnerable neurons, is much more of a puzzle. It is a place where we could discover novel therapeutic targets.”

The biggest barrier to studying these brain cells was the absence of any easy way to distinguish vulnerable neurons from their neighbors. For Roussarie and his colleagues, BacTRAP provided an answer. Developed at Rockefeller by Greengard and Nathaniel Heintz, bacTRAP technology makes it possible to catalogue proteins within specific populations of neurons in mice.

“We needed something like a microdissection of these neurons from the complex and smushy bowl of the brain,” says Marc Flajolet, acting head of the lab and coauthor on the study.

BacTRAP allowed the researchers to isolate the vulnerable neurons and analyze how they differ, genetically, from more resilient brain cells. A Princeton University team led by Olga Troyanskaya then designed computer algorithms to help the team focus upon only the genetic anomalies likely to be most relevant to neurodegeneration.

“The goal was to form a big-picture view, rather than a list of genes,” Flajolet says. “Only by way of these sophisticated data-analysis frameworks can you get to the bottom of something as complicated as the neurodegenerative cascade in Alzheimer’s disease.”

From neurofibrillary tangles to therapeutic targets

The findings highlight a suite of genes that are likely involved in making entorhinal cortex neurons easy targets for degeneration.

The most compelling among them is thought to play a major role in the early stages of Alzheimer’s—deciding whether tau proteins clump into neurofibrillary tangles in the first place. The gene produces a protein called PTBP1, a so-called splice factor that directs cells to create one of two subtypes of tau protein. Prior studies have shown that the characteristic protein clumps of Alzheimer’s occur specifically when the ratio of these two flavors of tau is disrupted—and the new findings suggest the disease might be driven by cells whose tau-variant levels are disturbed.

“When tau popped out, there was a lot of excitement,” says Vicky Yao, an assistant professor in computer science at Rice University, and co-author of the Neuron report. “Once we figure out what makes neurons more vulnerable, that can lead to multiple avenues to decrease their vulnerability.”

Successful strategies for preventing and treating neurodegeneration will likely involve diverse approaches, adds Roussarie. Future drugs may need to target plaque formulation as well as neurofibrillary tangles, for example, and the first step toward preventing the latter will be to understand what makes some neurons prone to tangling in the first place.

“The diversity of neurons was just not taken into account before,” Roussarie says. “A lot of people are studying neurofibrillary tangles, but only now are we beginning to address it through the prism of neuron vulnerability.”

The pathway to Parkinson’s takes a surprising twist

A new study finds that neurons affected in Parkinson’s disease can shut down without fully dying, allowing them to also switch off neighboring cells. The findings might give scientists a better understanding of how the condition wreaks havoc in the brain, as well as ideas for new treatments.