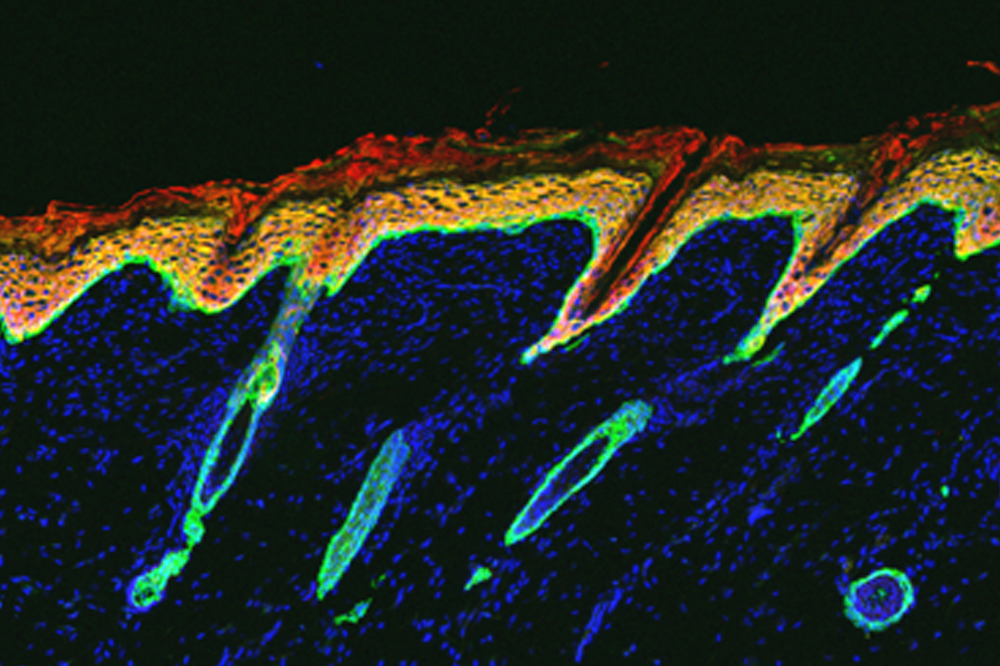 Whether we like it or not, our hair continually grows. Its regenerative powers reside deep inside each hair follicle, in a cluster of dividing stem cells—some of which will specialize and eventually give rise to new hair while others will produce new stem cells.

Scientists have delineated numerous mechanisms that guide stem cells toward particular fates, but they know less about the subset of cells that instead manage to hold onto their stem cell identity.

New research from The Rockefeller University, published yesterday in Nature Cell Biology, has identified a pair of gene-regulatory proteins responsible for maintaining this perpetual reserve of stem cells, ensuring that new hair will grow. Without these gatekeepers, the stem cells disappear, the follicles break down, and hair falls out.

“We identified proteins that are critical to maintain the stem cells that make hair,” explains Elaine Fuchs, Rebecca C. Lancefield Professor and head of the Robin Chemers Neustein Laboratory of Mammalian Cell Biology and Development. “When the stem cells lack these proteins, their follicles degenerate, triggering an inflammatory response.”

The findings give insight into some of the molecular missteps that may contribute to a permanent hair loss condition in humans called primary cicatricial alopecia, in which hair follicles disintegrate and are replaced by scar tissue, challenging conventional wisdom about the origins of this mysterious disorder.

In recent years, Fuchs and others have identified a host of proteins called transcription factors responsible for making stem cells either remain stem cells, or develop into other cell types. Each transcription factor carries out its function by switching a set of genes on or off, and together they help ensure that the body only makes new hair at the right times or places.

In this new work, Fuchs and her colleagues searched for so-called master regulators—transcription factors that coordinate the activities of the others. Early experiments pointed them to two closely related factors, NFIB and NFIX, which are present at high levels in hair follicle stem cells.

These experiments also shed new light on the poorly understood condition of primary cicatricial (scarring) alopecia. When the researchers took a closer look at skin samples from the mice under a microscope, they noticed multiple features that bore a striking resemblance to those seen in people with the disease, including a dearth of stem cells, degenerated follicles, and scar tissue.

“A common feature of scarring alopecia is the loss of hair follicle stem cells,” says Rene Adam, a former graduate student in Fuchs’s lab. “This leaves patients without the ability to regenerate hair, and eventually leads to irreversible hair loss.”

Because the condition is usually accompanied by inflammation, it has been suspected to arise from a faulty immune system. However, the new findings are at odds with this idea: Two weeks after the mice had lost NFIB and NFIX, Adam and his colleagues saw no signs of an inflammatory response even though the mice’s hair follicle stem cells had dwindled in number. Only after the hair loss was obvious did immune cells become abundant in the skin, swarming around the stem cells’s usual hideout. Treating the mice with drugs that suppress the immune system did little to prevent stem cell disappearance, although it did avert some hair loss, suggesting that immune cells contribute to follicle degeneration.

“What we find in NFIB/NFIX-deficient mice is that the stem cell defect leads to inflammation, and not the other way around,” says Hanseul Yang, a current postdoc in Fuchs’s lab and co-first author of the study.

The wound that wasn’t there

In further experiments, the researchers learned how the stem cell defects arise in the first place. Without NFIB and NFIX, parts of the genome containing key stem cell genes became inaccessible, and the factors needed to keep these genes active could no longer arrive at their posts and carry out their duties.

“NFIX and NFIB are the gatekeepers for other key transcription factors that are needed for hair regeneration,” Adam says.

Although the loss of NFIB and NFIX caused stem cells to disappear, they didn’t die. They just got converted into a mixed identity state that helps to regenerate new skin and sebaceous glands, but not hair. This ability is usually reserved for hair follicle stem cells that sense a wound and migrate upward to repair it. “Intriguingly, the hair follicle stem cells that lacked NFIB and NFIX acted as though there might be a wound they have to repair, except the wound wasn’t there,” Adam says. “Eventually, the hair follicles self-destructed.”