Erich D. Jarvis speaks with high-school students about the evolution of speech and diversity in science 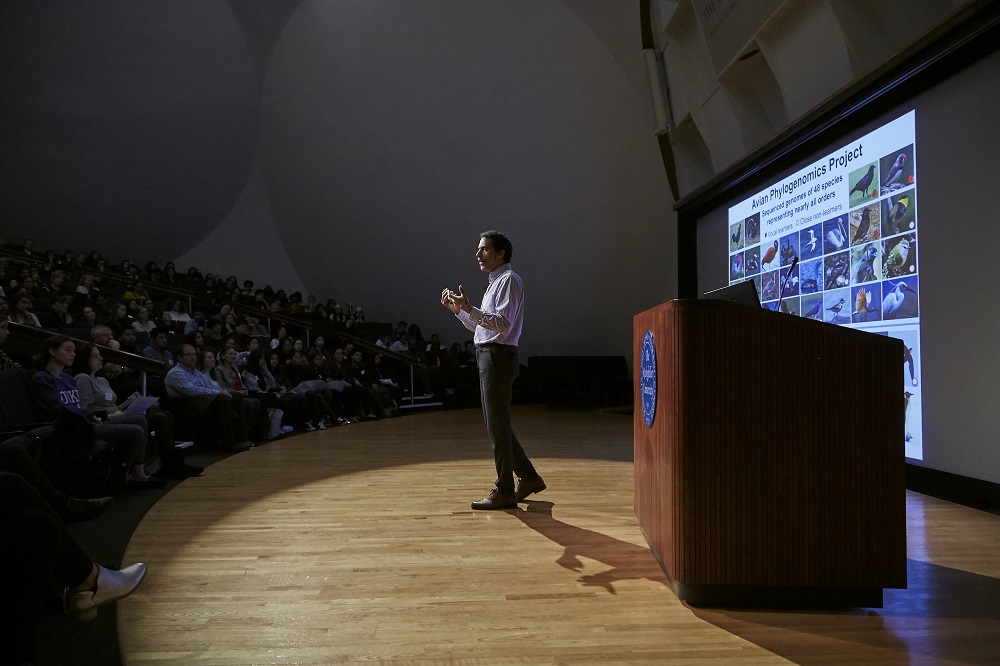 Jarvis’s scientific talk covered both his work to sequence the genomes of avian species and his research on vocal learning.

On a recent Saturday, over 400 high-school students crowded into Caspary Auditorium to hear neuroscientist Erich D. Jarvis deliver the 2020 Talking science seminar, discussing his research and his career path. Called “Singing in the Brain: A Personal Science Journey,” the program delivered on its dual promise: Jarvis gave the students an engaging introduction into the mysteries of how humans evolved our capacity for spoken language. And yes, it got personal.

Jarvis, who grew up in the Bronx, trained to become a professional dancer before changing his mind and joining Rockefeller as a graduate student. After 18 years on the faculty of Duke University, he returned to his alma mater as professor and head of the Laboratory of Neurogenetics of Language, which takes a multipronged approach to study vocal learning—a prerequisite for the development of speech—in songbirds and other species.

Jarvis recapped recent work in his lab suggesting that motor circuits in the brain are involved in an organism’s ability to assimilate the sounds it hears to produce new vocal sounds. The former dancer pointed out that this facility for integrating sensory and motor information may also be connected to our propensity for coordinated movement to music, ranging from the Macarena to the floss to the cha cha, and delighted his audience with videos of a dancing parrot. He stressed that vocal learners, a group that includes humans and just a small handful of other species, are the only members of the animal kingdom that possess the ability to dance.

Jarvis then engaged the students in animated conversation about culture, race, and what it means to be a scientist. He delved into the multiple advantages of diversity: labs benefit from bringing together students and scientists who use different techniques and approaches to solve problems, and who contribute a range of cultural frameworks. “We need more people to lead by example,” Jarvis said. “We need people of diverse backgrounds, diverse genders, to be leaders in science and to be role models.”

When students asked questions about his own challenges as a person of color, Jarvis shared that he sometimes wrestles with impostor syndrome and other people’s prejudice, despite significant scientific achievements. “Sometimes I take out my CV and I see all the papers I’ve published, all the awards,” he said. “The evidence, when it stares back at me, says, ‘Erich, You’re ok, just keep doing what you are doing.’”

Talking science, now in its 60th year, is a day-long event designed to inspire young learners. Students from 50 public and private high schools from all five boroughs, the greater metro-New York area, New Jersey, and Connecticut were in attendance. The biopharmaceutical company Merck and the Museum of Natural History helped to support this year’s event.

Watch Jarvis’s talk about the study of vocal learning and his professional journey.

Talking science is designed to engage high-school students and their teachers through interactive lectures and demonstrations.