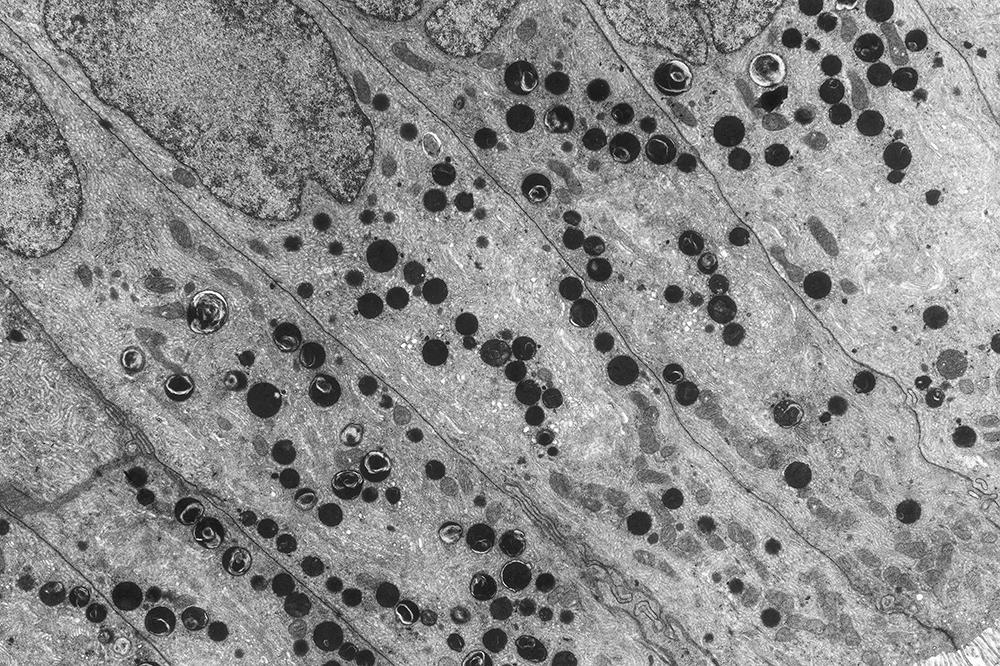 Acidity within lysosomes (black) is required for proper digestion of nutrients for the cell.

Just like the body contains lungs, liver, and lymph nodes, so does each of the body’s cells contain tiny specialized organs. Perhaps most peculiar among them are lysosomes—bubble-like sacks that act as part recycling bin, part stomach.

Among other things, a lysosome devours cellular debris—and, like a stomach, it needs to be acidic to do its job. In fact, without acidic lysosomes, cells in culture stop dividing and eventually die off.

“We asked a very simple question: Why?” says Kivanç Birsoy, Chapman Perelman Assistant Professor at The Rockefeller University. Experiments in his lab uncovered an equally simple answer: Iron. It turns out that a cell can no longer access this essential nutrient when the pH within its lysosomes rises.

The discovery, recently described in Molecular Cell, has implications for understanding and treating diseases, including cancer.

Lysosomes were first discovered in 1955 by Christian de Duve, a cell biologist who would later join Rockefeller. In the years that followed, scientists learned that lysosomes carry out multiple jobs inside cells—from engulfing all sorts of cellular garbage and breaking it down for reuse, to relaying biochemical signal and processing nutrients.

In spite of their complex functions, however, most functions of lysosomes are dispensable. When they don’t function properly, “the cell somehow finds ways to compensate,” Birsoy says.

The critical exception, as shown by the lab’s recent findings, is converting iron into its nutrient form. “Processing iron seems to be the one thing cells cannot accomplish without lysosomes,” he says.

Ross Weber, a graduate student in Birsoy’s lab, made the discovery after he reduced cells’ lysosomal acidity enough to stress the cells, but not kill them. In responding to this challenge, the cells activated genes involved in the use of iron, while their iron levels dramatically dropped.

Cells don’t cope for long without iron, which is needed to make DNA and other essential molecules. When a rise in pH causes iron depletion, cells stop dividing and eventually die. The scientists think this happens because lysosomes free iron from the molecules that transport it, something they do best at a pH of 4 to 5, the approximate acidity of a tomato.

Because lysosomes are known to be essential for cancer-cell proliferation, the discovery suggests a potentially new way to fight tumors: starving them for iron. In recent years, Birsoy’s lab has devised a number of innovative ways to kill cancer cells by blocking their access to essential nutrients; now iron depletion promises to yield yet another weapon in this arsenal of potential drugs.

“In the future, it will be important to determine whether these findings are also relevant in the context of other conditions linked to the loss of acidity, such as lysosomal storage disorders and neurodegenerative diseases,” Birsoy says. “We believe there are a lot of exciting possibilities out there.”

The finding offers researchers a direct way to investigate oxidative stress and its damaging effects in aging, cancer and other diseases.