Neurodegenerative diseases may be caused by molecular transportation failures inside neurons 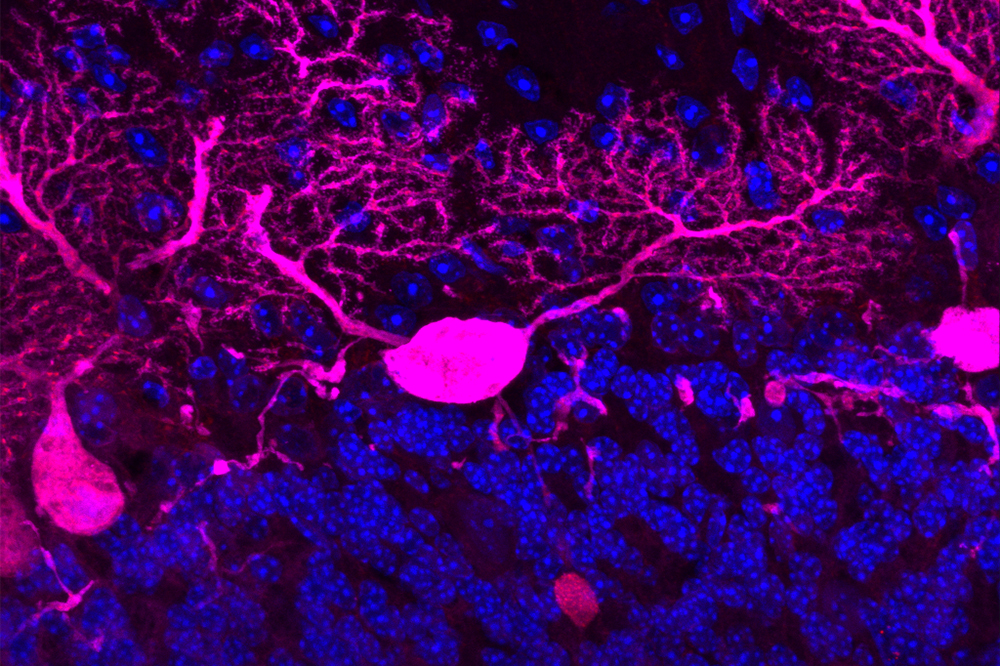 When the system that transports molecules through the long branches of neurons (pink) breaks down, chaos slowly ensues.

All neurodegenerative diseases have a common thread: the appearance of protein clumps in the brain such as amyloid-beta plaques in Alzheimer’s disease and alpha synuclein aggregates in Parkinson’s. The root cause of this buildup has been hard to pinpoint, but Rockefeller scientists have identified a likely culprit that opens up a new avenue for developing treatments.

In a pair of studies carried out in flies and mice, the researchers discovered that the issue lies in the system that transports proteasomes, the molecular machinery that breaks down proteins, to specific locations within a cell.

“This is the first study to find a mechanism by which the proteasomes are moved to nerve endings to do their job,” says Hermann Steller, the Strang Professor at Rockefeller. “When this mechanism gets disrupted, there are severe consequences for the function and long-term survival of nerve cells.”

Proteasomes are made in the cell body of a neuron and need to be transported over long distances to reach the nerve endings where the neuron connects with other cells—a journey of more than one meter in some cases. When proteasomes fail to reach these critical communication hubs, the cell descends into turmoil.

“Instead of being degraded, damaged proteins in these sites hang around long enough to interact with other binding partners, form aggregates, and disrupt cell function,” Steller says. Over time, this causes degeneration of nerve fibers and ultimately cell death.

When Steller and his team began investigating the proteasome transportation system in fruit flies, they identified a protein called PI31, which plays a crucial role in loading the proteasomes onto the cellular components that ferry them around. In research published in Developmental Cell, they show that PI31 enhances binding and promotes movement of proteasomes with cellular motors. Without it, transport is halted. This is the case in both fly and mouse neurons, suggesting that the transport mechanism is common between many species.

Digging deeper into what happens when PI31 is defective, the scientists worked with Mary Beth Hatten’s lab to generate mice whose PI31 gene was switched off in two groups of brain cells with particularly long extensions. In research published in the Proceedings of the National Academy of Sciences, they found that without PI31, proteasomes cannot travel, resulting in abnormal proteins levels at the tips of neuronal branches. The PI31-lacking neurons also looked peculiar, both with respect to their branches and to their synapses, the structures where branches from two neurons connect.

“Notably, these structural changes became progressively more severe with age,” says Steller. “Inactivation of PI31 in these neurons was reminiscent of the severe behavioral and anatomical defects we see in some human neurodegenerative disease.”

There are other reasons to suspect that the lab’s findings could inform the treatment of neurodegenerative diseases. For example, mutations in a human gene called PARK15, which is critical for PI31 activity, have been identified in a severe form of early-onset Parkinson’s disease; and mutations in the PI31 gene itself have been linked to Alzheimer’s disease.

Steller and his team are now working to determine if PI31, or molecules that affect its activity, are viable drug targets. The fact that PI31 appears to be involved in the early stages of nerve cell degeneration is especially compelling, as it could mean that drugs blocking this protein might have the potential to halt brain damage early on in the process.

As for what actually causes brains to degenerate, Steller believes the formation of aggregates is likely not the direct disease mechanism, but rather a symptom of bigger problems. “Our work suggests that it really starts with a local defect in proteasomes, resulting in the failure to degrade proteins that are critical for nerve function” he says. “These undigested proteins subsequently form aggregates and activate additional damage control pathways.  But eventually, these clearance systems are overwhelmed, which causes a slow but steady progression to a detectable disease.”

Steller and his colleagues are now investigating ways to stimulate the transportation pathway to get proteasomes out to the distal branches—work they believe could have a broad impact on the treatment of neurodegenerative diseases.