From the tiny testes of flies, new insight into how genes arise 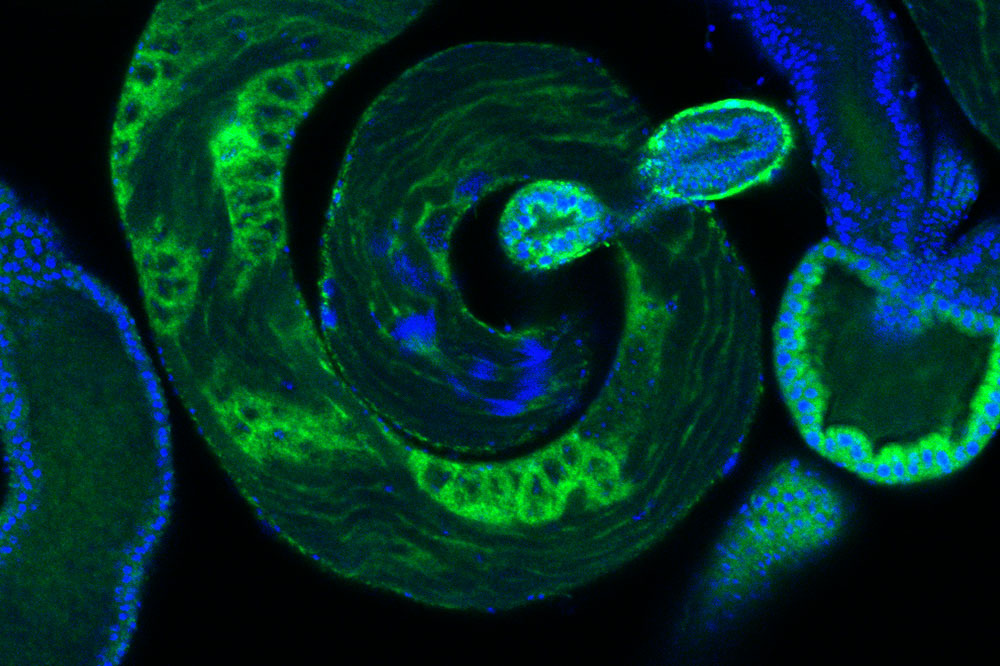 Developing sperm, in blue, within a fruit-fly testis.

In the battle of the sexes, males appear to have the innovative edge—from a genetic standpoint, at least. Scientists are finding that the testes are more than mere factories for sperm; these organs also serve as hotspots for the emergence of new genes, the raw material for the evolution of species.

Using fruit flies, a Rockefeller team has gained key insight into how nature’s attempts at innovation play out during the development of sperm. In research described August 16 in eLife, they mapped the presence of mutations to DNA at the single-cell level, and the activity of new genes arising from such changes.

“Our work offers an unprecedented perspective on a process that enables living things to adapt and evolve, and that ultimately contributes to the diversity of life on Earth,” says assistant professor Li Zhao, who led the research.

In recent years, studies in animals from flies to humans have turned up a number of young genes that originated in the testes. These and other discoveries suggest the testes rank among the most productive sites in the body—male or female—for genetic innovation.

This mass production of genetic novelties comes with significant risks, however. In humans, for example, a father’s sperm acquires two to three times more new mutations than do a mother’s eggs in the course of normal development, leaving the sperm riddled with genetic mistakes. In some cases, such mistakes may harm his offspring, or even derail the prospect of fatherhood altogether.

In other words, the male stands to lose the one thing that matters in the game of evolution: the opportunity to propagate his gene pool into the next generation.

But whatever the potential downside genetic experimentation has for individual males and their offspring, the dynamics of reproduction nevertheless encourage it. Potential fathers face intense pressure to attract females and fend off competitors. Any advantage, such as brighter plumage or hardier sperm, for example, can make all the difference.

At the molecular level, this pressure drives an abundance of new genes within the testes. Scientists think that if these newcomers contribute to males’ ability to father healthy offspring, they rapidly acquire a fixed place in the genome and may even go on to contribute elsewhere in the body.

Looking a little closer, however, the picture gets blurry. Scientists haven’t yet understood the dynamics by which genetic innovation occurs within the precursor cells from which sperm develops.

To find out more, Zhao and researchers in her lab tagged individual cells from fly testes, then identified and decoded the RNA sequences each contained. This approach allowed them to see how the activity of specific genes changed throughout the developmental stages. Within the RNA sequences isolated from stem cells and five intermediary cell types, the researchers examined innovation from two perspectives: that of mutations and that of genes.

Mutations known as substitutions, in which one letter of DNA’s code is swapped for another, are most abundant early on in the development of sperm, then decrease, they found. The sperm cells’ DNA-repair machinery follows a similar pattern—it is most active early on, then tapers off—which makes sense, according to Zhao, since the machinery is responsible for fixing errors like these.

Within the RNA sequences, Zhao’s team hunted for a particular type of young gene—one that arises from scratch rather than through duplication of an existing gene. For Zhao, these so-called de novo genes, which originate from sequences that originally did not code for protein, are the most interesting new genes from an evolutionary perspective. Her team found no less than 184 de novo genes, drawn from a set they had previously identified.

When they examined these de novo genes, the scientists uncovered complex patterns, with certain genes showing up primarily in certain cell types, but not in others. About 15 percent of these genes appeared early on, including in the stem cell stage—which is surprising, Zhao says, because scientists previously thought that new genes rarely show up at the start of development as this phase is tightly controlled. The most active period for de novo genes occurred midstream, however, in the so-called spermatocyte phase of developing sperm.

The scientists are now interested in understanding what purpose, if any, de novo genes serve when they first arise. And although it’s possible that some essentially fire at random, making no particular contribution, Zhao suspects that in many cases, these new genes play roles in the maturation of sperm cells.

“Precisely what these de novo genes are doing to move development along is an exciting open question,” Zhao says.