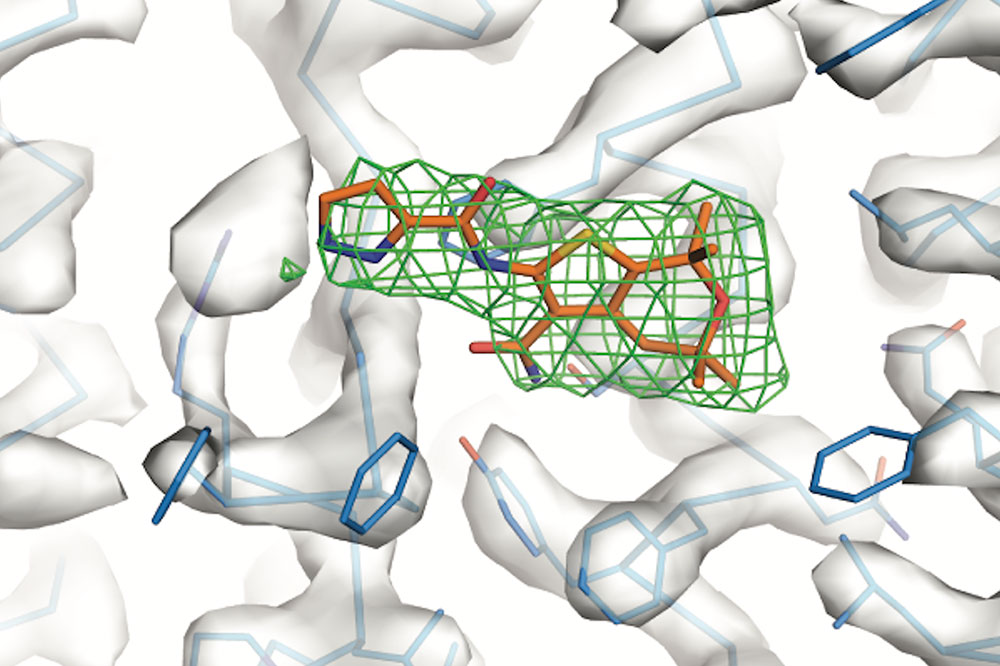 A potentiator (orange) binds to a protein “hotspot,” altering the molecule’s conformation.

A new study by Rockefeller scientists characterizes, for the first time, the interaction between potentiators and the protein they target at atomic resolution. The research, described in a recent report in Science, shows that two distinct compounds act on the same protein region—a finding that points to strategies for developing more effective drugs.

The cystic fibrosis transmembrane conductance regulator (CFTR) is a channel that, when open, allows chloride ions to move in and out of cells. When CFTR is mutated, ions cannot flow freely, leading to changes in the make-up of mucus lining internal organs. These changes can be particularly dangerous in the lungs where they cause thick mucus to accumulate, often leading to impaired breathing and persistent infections.

Potentiators are used to increase the flow of ions through CFTR, ameliorating some symptoms of cystic fibrosis. Currently, only one such drug, known as ivacaftor, is on the market; another, called GLPG1837, is now in development.

“Ivacaftor can improve lung function by about ten percent. It can help a lot, but it’s not a cure and not everybody responds to it,” says Jue Chen, the William E. Ford Professor. “So there’s a lot of interest in developing new potentiators.”

Pursuing this goal, Chen and her colleagues investigated how existing potentiators work. They used cryo-electron microscopy—a technique that beams electrons at a frozen specimen to reveal protein architecture at an atomic level—to study the structure of CFTR attached to either ivacaftor or GLPG1837. Somewhat surprisingly, the researchers found that the two drugs bind to the exact same spot on the protein.

“These compounds are developed by two different companies and have very different chemical properties. But they manage to make their way to the same site,” says Chen. “That tells us that this is a very sensitive, very important region of the protein.”

Upon analyzing the “hotspot” where the two potentiators bound, the researchers noticed a peculiar feature: This area contained unwound loops inside the membrane that signify a flexible structure. And this flexibility, the researchers realized, serves a practical function.

“The region we identified, it turns out, works as a hinge that swings open to allow ions through the channel—so its structure needs to be flexible,” says Chen. “The compounds we studied bind to that very region, locking it into a channel-open conformation to improve ion flow. That’s how they work.”

With this knowledge, the researchers hope to craft compounds that directly target the hinge and do an even better job at keeping the ion channel open. And as Chen and her colleagues work toward the development of new drugs, she encourages other researchers to do the same. This kind of competition, she hopes, will drive down the cost of potentiators, making the medication available to a much larger portion of patients.

“We put our original data online and welcome anyone to use it,” says Chen. “Because if more researchers use it, more treatment options will become available, prices will drop, and more people will be helped.”

For the brain to function smoothly, its cells must carefully regulate which proteins are produced and when. By studying gene regulation, researchers are now shedding light on complex brain conditions like autism and stroke.

New research sheds light on how some cancer cells use molecular pumps to expel chemotherapy drugs before they have a chance to work.

In order to better understand how genetic mutations give rise to cystic fibrosis, researchers need to map the protein responsible for the disorder. The new structure has led to new insights on how this molecular channel functions.