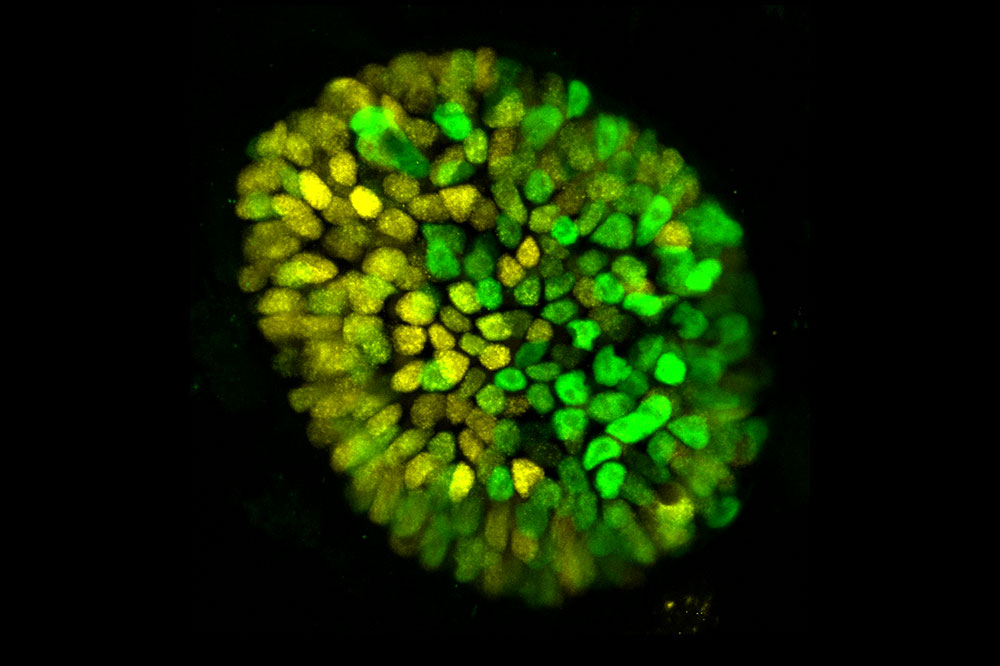 Researchers used a 3D model based on lab-grown stem cells to simulate the moment in development when the body starts to separate into two distinct halves.

From a biological standpoint, the earliest stages of life are the most mysterious. A developing human embryo undergoes a flurry of rapid changes, and these changes are exceedingly difficult to study because they transpire within the confines of a womb.

But with new technology, it might soon be possible to fill important gaps in our understanding of early pregnancy and development. Rockefeller scientists recently used stem cells to create a 3D model of early embryonic tissues, allowing them to simulate developmental processes as they occur in time and space. The researchers hope that this tool, whose utility they recently demonstrated in a report in Nature Cell Biology, will make it possible to further elucidate the processes that guide embryonic growth, and ultimately lead to innovations that promote healthy pregnancies.

The concept of using stem cells to model early embryonic development was first developed in labs of Ali H. Brivanlou, the Robert and Harriet Heilbrunn Professor, and Eric D. Siggia, the Viola Ward Brinning and Elbert Calhoun Brinning Professor, who published their initial research on the topic in 2014. Despite making several crucial discoveries since that time, Brivanlou and Siggia knew that his system was, in some ways, limited: conventional stem cell models are two dimensional and do not take on the actual shape of an embryo, therefore prohibiting researchers from asking key questions related to its structure.

For example, scientists are highly interested in the process by which embryos attach to the uterus—a crucial first step to a successful pregnancy. And according to Mijo Simunovic, a Simons Junior Fellow in Siggia’s lab, it is practically impossible to study this complex phenomenon in a two-dimensional system.

“Attachment is inherently a 3D problem,” he says.

To address this issue, Brivanlou, Siggia, and Simunovic used an interdisciplinary approach to develop a 3D model simulating an approximately fourteen-day-old human embryo—the stage of development during which a key milestone of embryonic development called “gastrulation” takes place.

“We combined several techniques—bioengineering, physics, and developmental biology—to create this model,” explains Simunovic, who notes that this research would not have been possible without the unique, longstanding collaboration between the Siggia and Brivanlou labs. “We now have a 3D system that mimics not only the embryo’s genetic fingerprint, but also its shape and size.”

Of course, it is not enough to make a model that simply looks like a real embryo: it must also act like one. Accordingly, the researchers tested whether their system could simulate one of the most fundamental processes in animal development—a phenomenon known as symmetry breaking.

In its earliest stage, an embryo comprises a symmetrical sphere of cells. Then, after about two weeks, this symmetry begins to disappear as the embryo takes on distinct features that will become various parts of the body.

“Symmetry breaking drives almost everything that happens during embryonic development,” says Simunovic. “Our heads don’t look like our feet, and that’s because, at some point, the embryo breaks into two parts, anterior and posterior.”

This breakage is, in fact, the first symmetry breaking of the body axis that takes place during human development, and it transpires just after attachment to the uterus. If the researchers could induce such a breakage in their model, they reasoned, then they would know that their system accurately emulated a real embryo—at least during this key period in developmental time.

To this end, the researchers exposed their model to chemical signals that, in pregnancy, are released by the placenta. Through a series of experiments, they found that the addition of a chemical known as BMP4 reliably prompts symmetry breaking.

This result has implications beyond elucidating the chemistry of a particular developmental process. Now that scientists can successfully model embryonic events in 3D, extensions of this research may be used in future studies of pregnancy complications, such as unsuccessful attachment.

“About 50 to 75 percent of embryos do not attach, creating a huge bottleneck to pregnancy,” says Simunovic. “We don’t know why that is, but using this model we may be able to find out.”

This system, Brivanlou notes, could also be used to study inborn diseases. “We can create 3D embryonic models of genetic conditions, and follow the developmental process in real time,” he says. “These models can finally advance the understanding of a wide range of diseases for which we currently have no idea where and when things begin to go wrong.”

Embryos remember the chemicals that they encounter

A new study shows that embryonic cells retain a memory of the chemical signals to which they are exposed. Without these memories, cells fail organize into distinct tissue types.

For the first time, scientists have shown that a small cluster of cells in the human embryo dictates the fate of other embryonic cells. The discovery of this developmental “organizer” could advance research into many human diseases, and it suggests we have more in common with birds than meets the eye.

The study participants continued to improve their antibodies months after initial infection, potentially due to exposure to the remnants of the virus hidden in the gut.

Patients in the clinical trial will receive two highly potent antibodies against SARS-CoV-2 discovered at the university. Designed to prevent people with early COVID-19 from developing severe disease, the treatment is urgently needed as hospitals continue to be inundated by repeated surges of infection, and mass vaccinations are still months away.