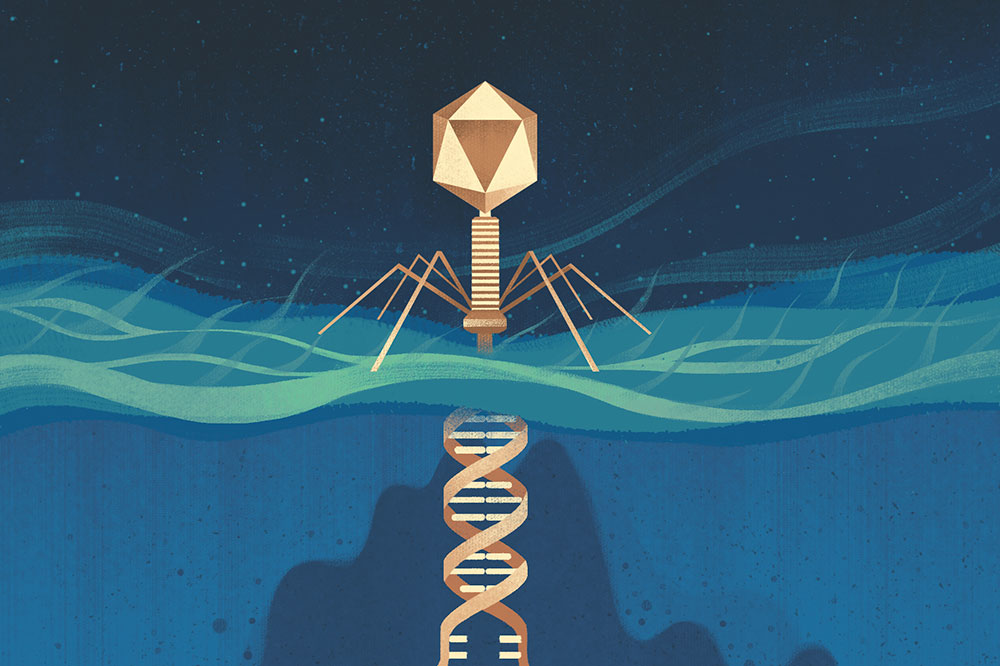 Bacteriophages inject their DNA into bacteria, typically resulting in the bacterium’s demise. CRISPR-Cas systems defend bacteria against these attacks. Illustration by Jasu Hu.

Sometimes, the best defense against hostile invaders is a good, long nap. Or at least, that strategy seems to work for bacteria.

In a new study, described in Nature, Rockefeller scientists showed that microbes under viral attack turn their defenses not only on their enemies, but also on themselves. This drastic measure, the researchers found, doesn’t kill the bacteria, but rather sends them into a dormant state that prevents the infection from spreading.

Among bacteria, viruses called bacteriophages are public enemy number one.

These pathogens propagate by injecting their genome into unsuspecting microbes, eventually causing their host cell to rupture, at which point progeny phage are released to infect other members of a bacterial colony.

To mitigate these attacks, bacteria have evolved immune mechanisms known as CRISPRs, or clustered regularly interspaced short palindromic repeats, which, with the help of associated Cas enzymes, detect and destroy foreign genetic material.

Microbes have at their disposal many different CRISPR systems, one of which caught the attention of Luciano Marraffini due to its unique strategy for fending off intruders. Whereas most Cas enzymes destroy viral DNA, this particular enzyme, Cas13, works by cleaving RNA.

“Since Cas13 targets RNA, it was initially thought to have evolved to impede phages with RNA genomes. The problem is, RNA phages are exceedingly rare,” he says. “So we wanted to see whether it might have evolved to serve a different function.”

Working with Helen Hay Whitney postdoctoral associate Alexander Meeske, Marraffini showed that activation of Cas13 actually protects bacteria from phages with DNA genomes, which are far more common. But how, they wondered, could an RNA-cutting enzyme actually defend microbes from this kind of virus?

Through a series of experiments, the researchers found that Cas13 helps bacteria, ironically, by hindering them. That is, the enzyme cuts up bits of host RNA, sending the bacteria into a dormant state—a kind resting phase in which the microbes remain alive but don’t grow. This strategy works, says Meeske, because viruses need host RNA to replicate.

“Phages are parasites: They don’t have all the elements needed for their propagation, so they rely on the host,” he explains. “And if the host cell isn’t making those elements, the phage cannot propagate.”

The researchers also found that Cas13 kills viruses more thoroughly than other Cas enzymes. Standard CRISPR-Cas systems are highly specific, cutting up bits of DNA that match a precise genetic sequence. And while this specificity can be an asset, it also comes with a big drawback: If a virus mutates, CRISPR cannot recognize the invader, and the phage escapes scot-free.

“If a phage has a single point mutation in its target sequence, then usually the virus is invisible to Cas and the infection will succeed,” says Marraffini. “But with Cas13 we didn’t see any escaper mutants.”

The researchers attribute this superb virus-fighting power to the fact that cell dormancy does not target one particular virus, but rather makes it impossible for any phage—including mutants—to propagate. And while an indefinite nap may not seem like much of a life for a microbe, Meeske notes that the real benefit of Cas13 lies not at the level of the individual, but of the bacterial community as a whole.

“The phage has one shot to deliver its genetic payload and replicate,” he says. “So if they inject their genome into a host that turns out to be inhospitable, the infection stops there. The phage loses, and the bacterial colony wins.”

How bacteria "self-vaccinate" against viral invaders

In studying how bacteria respond to viral infection, scientists are learning that their defense strategies cooperate in ways reminiscent of the elaborate immune systems of animals.