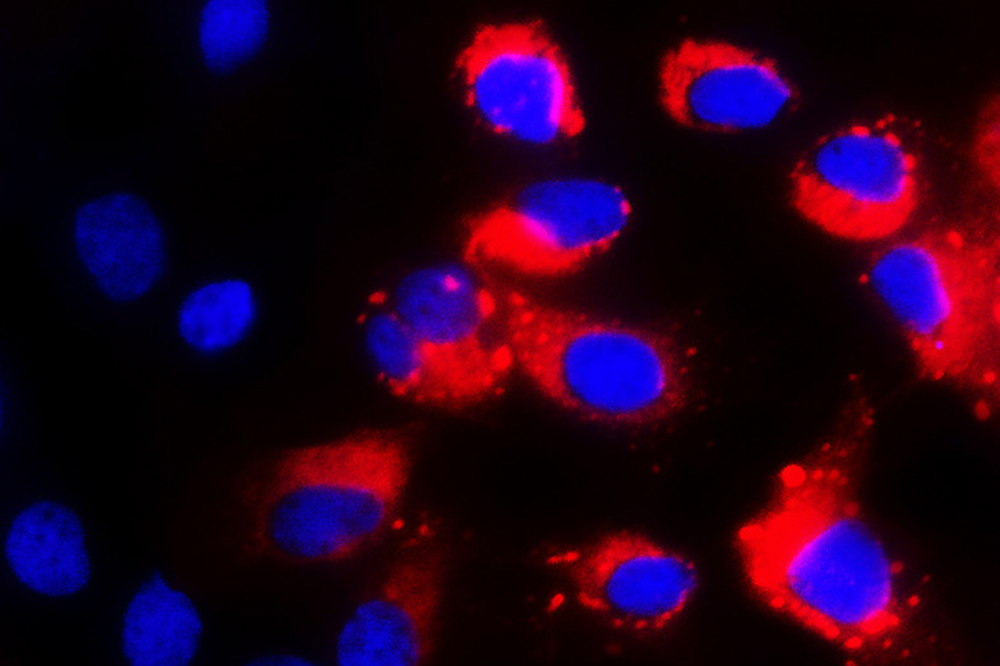 Stem cells lacking their protective genes are susceptible to infection by the dengue virus, in red.

For a stem cell, the future is wide open. It can divide infinitely to create more stem cells, or it can grow up into other kinds of cells, taking its place in the heart, brain, or other organs. But the stem cell loses something during that maturation: its remarkable ability to fight off viruses.

It’s important that stem cells be protected from infection: some of them are starting material for babies, and others make up a crucial reservoir to build or rebuild body tissues as needed. An intruder that damaged or killed stem cells would be disastrous, but how they go about protecting themselves has been a decades-long mystery. In a recent study in Cell, Rockefeller scientists offer up an explanation: stem cells are on constant high alert, bristling with preemptive defenses—means of protection that other cells use only when a virus actually attacks.

“That just makes sense,” says senior author Charlie M. Rice, the Maurice R. And Corinne P. Greenberg Professor in Virology at The Rockefeller University. “Because stem cells are pretty important, the body would want to be especially protective of them.” While certain mature cell types might be considered almost dispensable—when destroyed, they can be made again with the body’s stem cells—the stem cells themselves are not.

Most of the body’s cells have already settled on their identity, whether they’re a brain cell, a heart cell, or any other “differentiated” cell type. Stem cells are different; they haven’t taken on a final form. They can divide to make more stem cells, or differentiate as needed.

And for the past 40 years, scientists have been puzzled by another funny thing about stem cells: they’re unusually resistant to viral attack. Recent experiments by Rice’s group and others focused on plagues including dengue, HIV, and Zika: stem cells rebuff them all.

Xianfang Wu, a postdoctoral researcher in Rice’s lab, was working with stem cells to make liver cells and study hepatitis infections when he serendipitously found a clue: stem cells and liver cells use different viral defenses.

Most cells in the body stick to a relatively low-alert status until they detect a virus, at which point they pump out a molecule called interferon. Interferon prompts the cells making it, and those in the vicinity, to turn on hundreds of genes that fight the infection. For example, the genes can prompt a cell to call on immune cells for protection, or make it commit suicide.

But the stem cells, Wu observed, persistently turned on many of the antiviral genes that other cells activate in response to interferon, even if there was no interferon around. They were on high alert, all the time.

Wu then confirmed this finding in multiple stem cell types, including stem cells from embryos, stem cells artificially created by researchers, and stem cells that normally inhabit the pancreas, brain, or bone marrow. As these stem cells settled into final, differentiated cell types, they switched off the antiviral genes. Wu observed this phenomenon in human cells, but he also checked data from mouse and chimpanzee, where he saw the same patterns.

To confirm that these antiviral genes really were protecting the stem cells, Wu focused on one set of antiviral genes, called IFITM. They encode proteins that prevent viruses from entering a cell and are often turned on in the stem cells. When Wu deleted IFITM genes from stem cells, they became susceptible to dengue, flu, West Nile, and Zika viruses.

This means that cells have two modes of defense, depending on whether they’re stem cells or not. Regular, differentiated cells wait for a virus to come, and interferon to signal, before they maximize their defenses. Stem cells ignore interferon and keep their antiviral systems on all the time.

The latter seems like a good strategy—so why don’t differentiated cells keep their defenses on constantly, too? Rice thinks it would be a bad idea for cells to display all their defenses at once. That would give viruses in the vicinity the opportunity to sample cellular defenses, possibly leading to the selection of a rare, genetically different virus that could overcome those defenses and cause disease. It’s better for regular, replaceable cells to respond only as needed, Rice suggests.

“By understanding more about this biology in stem cells, we may learn more about antiviral mechanisms in general,” says Rice.

Such knowledge, he adds, could someday lead to medical applications. For example, it might help researchers design better drugs to activate the antiviral response in people with infections. It might also inspire treatments to help the body’s immune system fight cancer, or to attack cancer stem cells with viral therapies.