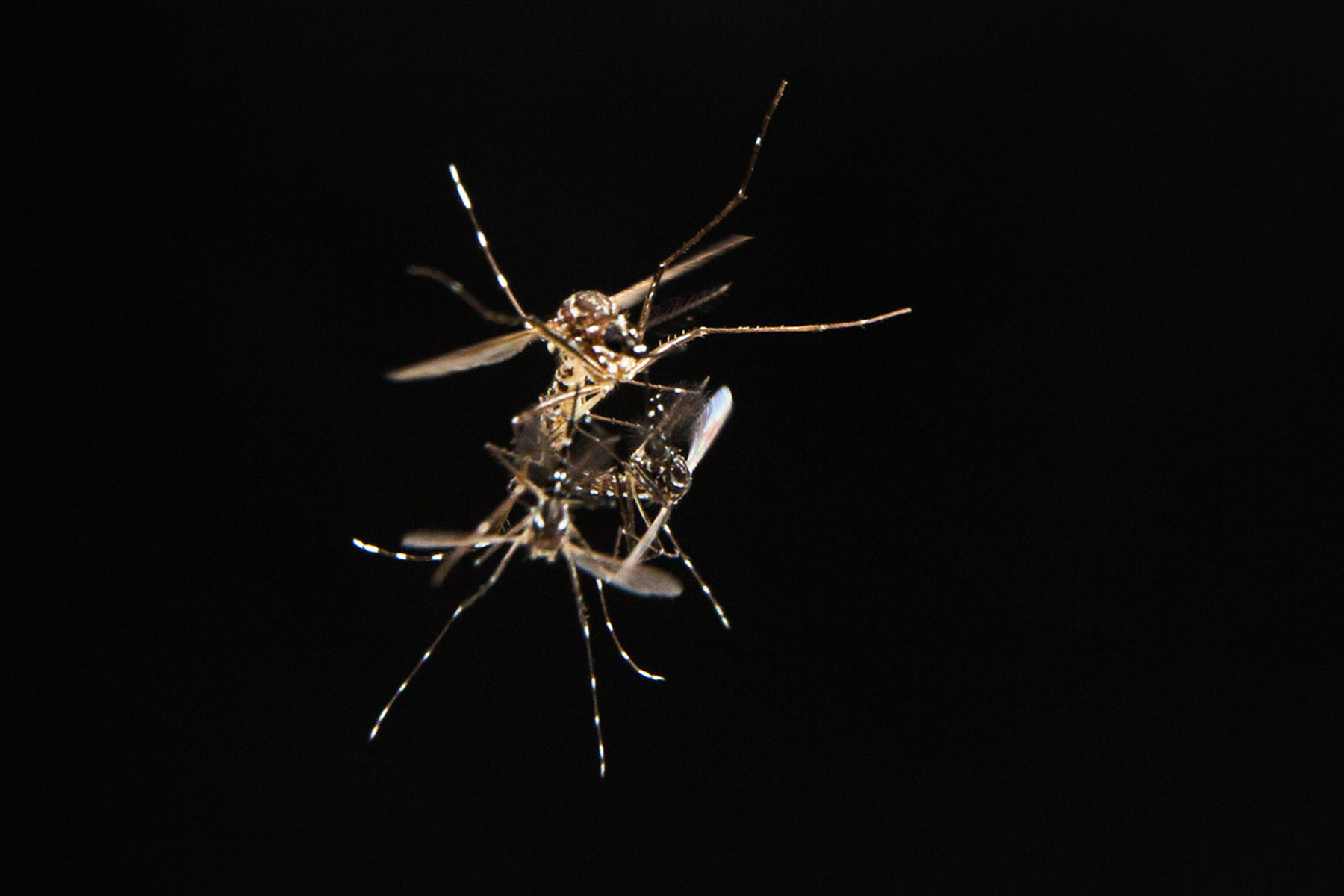 If you thought the sex lives of humans were complicated, consider the case of the female Aedes aegypti mosquito, bringer of Zika, dengue, and yellow fever: She mates but once, in seconds and on the wing, with one lucky male; spurns all further advances from other potential suitors; and stores enough sperm from that single encounter to lay more than 500 eggs, which she nourishes with the blood of human hosts.

Understanding her sexual behavior could help prevent her from transmitting the deadly diseases she carries to millions of people every year. Yet many of the mechanisms governing her mating habits remain a mystery.

Recently, however, researchers in the lab of Leslie B. Vosshall, Rockefeller’s Robin Chemers Neustein Professor, demonstrated that a chemical transferred from the male of the species during sex plays a key role in shaping the female’s sexual proclivities. Their work, which was led by postdoctoral associate Laura Duvall and appears in Current Biology, could yield new strategies for keeping this pest, and the pestilence it spreads, in check.

Duvall did not set out to reveal the secrets of the mosquito boudoir. Instead, she wanted to learn more about the biology behind female mosquitoes’ host-seeking behaviors. In particular, she was curious about the role played by a small protein called HP-I. Previous studies had shown that this molecule is produced primarily by male Ae. aegypti, and transferred during sex to females, in whom it lasts for only two hours—findings that Duvall and her colleagues confirmed.

The team disproved findings from other studies, however, which had suggested that HP-I suppresses the female’s urge to seek out human hosts. The researchers paired males and females, including both mutant mosquitoes that were genetically modified to produce virtually no HP-I, and normal (or “wild-type”) ones. After letting their subjects mate with one another in various combinations, the team looked for changes in the females’ host-seeking behavior. But no matter with whom they had mated, the females remained just as keen on finding people to bite.

Their attraction to male mosquitoes, however, was a different story.

Scientists have long known that female Ae. aegypti mate only once, a phenomenon known as monandry; but they didn’t know why. Given that HP-I is transferred to the female along with the male’s semen, Duvall and her colleagues wondered if it might play a role in switching off her sex drive.

“Whenever you see mixed fluorescent and non-fluorescent larvae, you know the female received sperm from more than one male,” Duvall explains.

The results of this mosquito paternity test were definitive: females that got a dose of HP-I during sex and then were offered another mate within an hour remained loyal to their initial partners, while females that got no HP-I did not. (Nevertheless, after 24 hours even females that mated with males lacking HP-I rejected additional partners, suggesting that other chemicals transmitted by the male are responsible for influencing female behavior over the long term.)

Subsequent experiments showed that simply injecting HP-I directly into females was enough to trick the insects into thinking they had already mated, leading them to reject genuine warm-blooded males.

Sex as a weapon

In a final series of experiments, Duvall and her colleagues ventured into the exciting realm of inter-species sex.

As a result, scientists now have a much better understanding of what shapes female mating behavior not only within one dangerous mosquito species, but across two of them. And those insights could have far-reaching implications.

For example, scientists might eventually be able to limit the number of disease-carrying mosquitoes by using a substance like HP-I to persuade females to avoid mating in the first place. And while vector-control specialists are already attempting to wipe out mosquito populations by introducing genetically modified sterile males into the field, that strategy will only work if the females they encounter remain loyal to their sterile mates—behavior that potentially could be elicited with a mosquito love potion informed by Duvall’s research.

Unlike their female counterparts, male mosquitoes have no desire to bite us. But the hardware for host-seeking is hidden in the male mosquito brain, locked behind a simple genetic switch.

New research shows that mosquitoes sense repellent through their legs

Scientists made the surprising discovery that the insects’ displeasure for touching DEET, the active ingredient in many repellents, helps prevent bites.

Statistical modeling may one day help scientists anticipate and manage a wide range of extreme occurrences, according to a new study.

Drug-resistant strains of tuberculosis bacteria affect half a million people a year. A compound first discovered in the 1980s may be able to help.

This fish is about to flip

An elaborate set of zebrafish experiments is shining light on one of neuroscience’s greatest enigmas: How brains make decisions. By tracking neural activity, scientists can now predict a fish’s next move before it happens.