Scientists at The Rockefeller University have mapped the three-dimensional structure for one of the more notorious disease-causing molecules in the human body: the protein responsible for the genetic disorder cystic fibrosis. And it looks fishy. 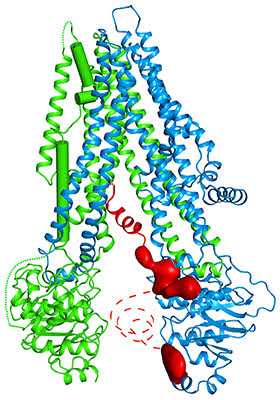 Open and shut: The researchers examined in detail how the cystic fibrosis protein (shown above) controls the flow of crucial ions in and out of cells.

In research described in Cell on March 23, the researchers report that the human structure is almost identical to one they have determined previously for the zebrafish version of the protein.

“With these detailed new reconstructions, we can begin to understand how this protein functions normally, and how errors within it cause cystic fibrosis,” says Jue Chen, William E. Ford Professor. “We now know that the conclusions we drew from our previous work in zebrafish also apply to us.”

Cystic fibrosis arises from mutations in a single gene, which encodes a protein that forms a channel through which chloride ions pass in and out of cells. Errors in this protein, called the cystic fibrosis transmembrane conductance regulator (CFTR), can lead to the accumulation of thick, sticky mucus. The buildup of mucus has the most deadly effects in the lungs, where it can cause potentially fatal breathing problems or respiratory infections.

Although cystic fibrosis is a human disorder, many animals also express CFTR. When the human protein proved difficult to work with in the lab, Chen and her colleagues instead turned to the more-cooperative zebrafish version. Among other things, they used it to map the location of disease-causing mutations—findings that can now be applied to studying how the faulty human protein can spark disease.

Two researchers from Chen’s lab, Fangyu Liu, a graduate student, and Zhe Zhang, a postdoc, led the effort to resolve the configuration of the human CFTR using an imaging technique known as cryo-electron microscopy, which has allowed researchers to take pictures, down to the level of atoms, of many previously intractable molecules. The structure of the human protein, like that of the zebrafish version, was determined using equipment at the Evelyn Gruss Lipper Cryo-Electron Microscopy Resource Center.

With new clues from the human structure, the researchers went on to explore the mechanism by which the channel becomes activated and the events that lead it to open and close, with help from David Gadsby, Patrick A. Gerschel Family Professor at Rockefeller and László Csanády of Hungary’s Semmelweis University, a former graduate student in Gadsby’s lab.

Chen is the head of Rockefeller’s Laboratory of Membrane Biology and Biophysics and a Howard Hughes Medical Institute investigator.

Investigates the structure and function of transporter proteins in the cell membrane.