Scientists can rack up many awards, but to have one’s name cemented in scientific nomenclature is a special kind of honor. In an homage to his mentor Daniel Kronauer, former Rockefeller postdoctoral associate Christoph von Beeren has named a new species of beetle Nymphister kronaueri. 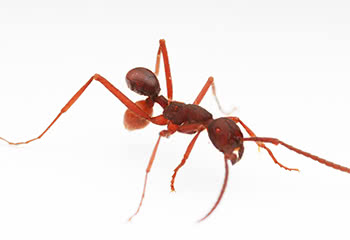 Free ride: On the backside of the ant, there appears to be two abdomens, but the darker one is in fact a beetle using the ant as a means of transportation. (Photo by Daniel Kronauer)

The new species was discovered by scientists in Kronauer’s Laboratory of Social Evolution and Behavior during a biodiversity assessment of ant parasites at La Selva Biological Station, a lowland Atlantic rainforest in Costa Rica. Nymphister kronaueri uses its strong mandibles to anchor itself tightly to the body of a nomadic ant, hitchhiking a ride when the ants move to new nesting sites, according to a new study describing the species in BMC Zoology.

“We realized that the abdomen of some ants looked odd and reflected the light of our headlamps in a slightly different way,” says von Beeren, now at the Technical University Darmstadt in Germany. “From above it is difficult to detect the beetle, because it closely resembles the ant’s abdomen. When viewed from the side, however, it looks as if the ants had a second abdomen. To our surprise, the odd-looking ant abdomens turned out to be beetles.”

Kronauer spent years studying ants in the field, but has since focused on using ants as a model system in the lab to understand the evolution and behavior of highly social organisms. His research has wide-ranging implications for our understanding of how individual units, be they cells or insects, interact to produce complex biological systems.

“Every time I think that I’ve seen it all, I’m being surprised by how little we still know about the organisms that share this planet with us,” says Kronauer. “You step out into the Costa Rican rainforest and find a beetle with the most wondrous and unique biology, riding on army ants across the forest floor at night. It turns out that nobody has ever noticed it before. This really makes you wonder what else is out there that we don’t know and probably can’t even imagine.

A new study in ants demonstrates that living in groups leads to improved fitness. The researchers show that, in larger groups, ants take on specialized roles and colony stability increases.

A new study in ants identifies a peptide that plays an important role in regulating reproduction. This research illuminates a potential trajectory for the evolution of distinct social castes—workers and queens.

Scientists disrupted a gene essential for sensing pheromones, resulting in severe deficiencies in the ants’ social behaviors and their ability to survive within a colony.

Scientists examine how a gut infection may produce chronic symptoms

For some unlucky people, a bout of intestinal distress like traveler’s diarrhea leads to irritable bowel syndrome. Recent discoveries have given scientists a better idea of how this happens, and potential leads for new treatments.