Barry Coller, vice president for medical affairs and physician-in-chief of The Rockefeller University Hospital, has won the 2016 Gill Award. The prize, given by the University of Kentucky Gill Heart Institute, recognizes lifelong achievements in the study of cardiovascular biology and disease. 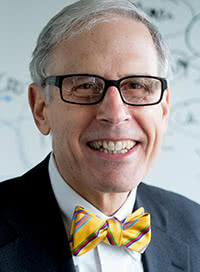 Coller, who is also David Rockefeller Professor and head of the Allen and Frances Adler Laboratory of Blood and Vascular Biology, shares the prize with Helen Hobbs of The University of Texas Southwest Medical Center, who also received Rockefeller’s 2015 Pearl Meister Greengard Prize. The awards will be presented at the 19th Annual Gill Heart Institute Cardiovascular Research Day on November 4 at the University of Kentucky.

Work in Coller’s lab focuses on blood platelets and the mechanisms of blood cell adhesion in vascular disease. Platelets, which play a vital role in blood coagulation, can adhere to and aggregate on blood vessels narrowed by atherosclerosis, potentially closing off the vessels and causing a heart attack or stroke. Coller identified a receptor responsible for this build up, platelet αIIbβ3, as an important target for antithrombotic therapy. Using monoclonal antibodies to that receptor to inhibit platelet aggregation, Coller helped to develop the drug abciximab, which is used during or after procedures such as stent placement or angioplasty to prevent blood clots. More than five million patients worldwide have been treated with abciximab.

Current research in Coller’s lab investigates the basic molecular interactions between blood cells and blood vessels, with the goal of developing new therapies for thrombosis and sickle cell disease.

Founded in 1997 with a gift from philanthropists Linda and Jack Gill, the University of Kentucky Gill Heart Institute was established to advance the development of translational and clinical research as well as treat patients with life-threatening cardiovascular complications. There have been 12 recipients of the Gill Award since its inception in 1998.

Before joining Rockefeller in 2001, Coller served on the faculties of State University of New York at Stony Brook and Mount Sinai School of Medicine. He received his bachelor’s degree from Columbia University and his M.D. from NYU School of Medicine. He is the director of both the Center for Basic and Translational Research on Disorders of the Digestive System and the Center for Clinical and Translational Science at Rockefeller.