One tornado alone can cause intense destruction, but the largest impact on both death rates and economic losses stems from “outbreaks,” in which six or more tornadoes occur within a limited time.

New research from Joel Cohen, Abby Rockefeller Mauzé Professor and head of the Laboratory of Populations at The Rockefeller University, and Michael Tippett of Columbia University, shows that the number of tornadoes that occur within each outbreak has increased over the past 60 years. Published recently in Nature Communications, findings supported by mathematical models indicate that the likelihood of extreme events—outbreaks with considerably more tornadoes than average—is growing over time. 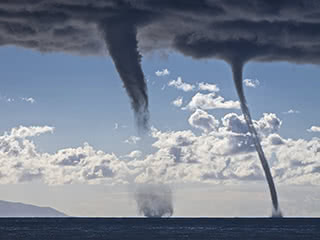 Clustering twisters: The number of tornadoes per outbreak appears to have steadily increased since 1954. Mathematical models indicate that the likelihood of extreme outbreaks is growing over time.

“Over a recent 10 year period, tornadoes in the United States resulted in an average of 110 deaths per year and annual losses ranging from $500 million to $9.6 billion,” says Cohen. “Outbreaks are the main offender, but relatively little was known about the current or projected statistics of their severity. We wanted to know if they’ve gotten worse over time, and how intense they may become.”

Using reports from the National Oceanic and Atmospheric Administration, the researchers found that the average number of tornadoes per outbreak increased by about 50 percent from 1954 to 2014. However, the total number of tornadoes has been largely the same from year to year, suggesting that tornadoes are increasingly clustered in outbreaks.

Those familiar with bell curves might imagine the center of the curve shifting right, and the curve itself becoming more spread out in this scenario. Then the right-hand tail of the curve, which represents outbreaks with large numbers of tornadoes, extends and makes extreme events more likely.

The researchers also found that the relationship between the mean and variance in this case follows a pattern known as Taylor’s law. Originally used by ecologists to describe how populations vary in time and space, Taylor’s law has also been used to study how cancer cells metastasize, how infectious diseases spread, and the stability of crop yields.

“Variance is growing faster than I would have guessed, and we don’t know why it’s so different from what we find elsewhere,” says Cohen. “If I were to speculate, I would say that certain physical drivers are accelerating, leading to increased energy in the atmosphere, which affects the forces behind tornadoes. Our results do not directly link climate change to the increasing severity of outbreaks, but we’ve found an indicator of change that’s hard to explain otherwise.”

The researchers note that Taylor’s law has helped provide insights across many systems, and speaks to the power of mathematical models.

“This pattern has a widespread occurrence that was not anticipated in the early days, and it now extends even to tornadoes,” says Cohen. “The benefit of asking basic questions in applied mathematics and biology may not be immediately obvious, but this study is an example of how useful these tools can become, and how they pay off in unexpected ways.”