With over half the U.S. population infected, most people are familiar with the pesky cold sore outbreaks caused by the herpes virus. The virus outsmarts the immune system by interfering with the process that normally allows immune cells to recognize and destroy foreign invaders. How exactly the herpes simplex 1 virus pulls off its nifty scheme has long been elusive to scientists.

Now new research from The Rockefeller University sheds light on the phenomenon. A team of structural biologists in Jue Chen’s Laboratory of Membrane Biology and Biophysics have captured atomic images of the virus in action, revealing how it inserts itself into another protein to cause a traffic jam in an important immune system pathway. The findings were published in Nature on January 20. 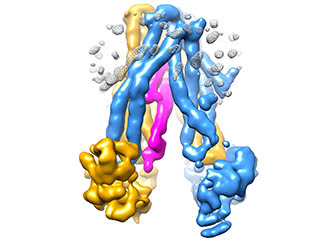 Traffic jam: The cold sore virus, shown in pink, inserts itself into TAP, a transporter protein whose function is key to the body’s immune defenses. By jamming the transporter, the virus is able to hide from the immune system.

“This work illustrates a striking example of how a persistent virus evades the immune system,” says Chen. “Once this virus enters the body, it never leaves. Our findings provide a mechanistic explanation for how it’s able to escape detection by immune cells.”

When a virus enters the body, it gets chewed up inside cells, and little pieces end up stuck to the outside of the cell. “These pieces act like a barcode to immune cells, which sense that a pathogen is present, and attack,” says senior research associate and first author of the paper, Michael Oldham.

One piece of the machinery involved in getting bits of virus to the cell’s surface is a protein called TAP. It’s a transporter that acts as a bridge to move the virus pieces across the membrane of the endoplasmic reticulum, a structure within the cell that packages the virus bits. From here they move to the cell’s surface, alerting immune cells to the virus’s presence.

“We knew that TAP was involved in our inability to have an effective immune response to this virus, but no one really knew what TAP looks like, or how it works,” says Chen. “Our findings show exactly how this viral protein jams TAP, which has two effects. One, it precludes the regular protein from binding. Two, it makes the transporter stuck in this conformation.”

It has been notoriously difficult to investigate the structure of proteins embedded in cellular membranes, such as TAP, because the samples are not stable and disintegrate easily. In this study, the researchers used a technique known as cryo-electron microscopy, in which the purified protein is frozen in a thin layer of ice. This stabilizes the sample, allowing scientists to retrieve data and computationally determine the structure.

The usefulness of cryo-EM was previously restricted by its inability to yield detailed molecular structures, but recent breakthroughs in detector technology now allow the capture of structural information at the scale of tenths of nanometers. Through a collaboration with Thomas Walz, head of the Laboratory of Molecular Electron Microscopy at Rockefeller, and using sophisticated cryo-EM tools, Chen’s team was able to investigate TAP’s structure in great detail.

Therapeutics to prevent cold sores is not something that will emerge in the near future, due to the complexities involved in creating a drug specific enough to only affect certain transporters. Accidentally interfering with TAP or other similar transporters in an unintended way would likely disrupt many cellular processes and cause major side effects.

However, understanding the various ways viruses block transporters could be harnessed for treating other diseases. TAP is a member of a family of transporters that are found across human cells, a number of which pump molecules like nutrients and drugs across membranes to various cellular compartments. These transporters often pump chemotherapy drugs out of the compartments they are needed in, rendering the drugs useless. Inhibiting these transporters for a short period of time could allow the chemotherapy to stay where it’s needed and function effectively.

“We haven’t been able to figure out how to block these transporters ourselves,” says Chen, “so we are learning how it’s done from viruses, which we hope will teach us some strategies for inhibition.”

Enzyme structure helps to explain how protein factories are constructed

Researchers characterized the structure of Mdn1, an enzyme key to making ribosomes.