Our goal with these approaches is to generate a genome with a metric minimum contig N50 of 1 million bp (1Mb), scaffold N50 of 10Mb, 90% of the genome assembled into chromosomes confirmed by 2 independent sources, a base-call quality error of QV40 (no more than 1 nucleotide error in 10,000 bp), and haplotype phased. We call this a 3.4.2.QV40 phased metric, where the first three numbers are the exponents of the N50 contig, N50 scaffold, and level of chromosomal assembly.

To date, of the over 335 vertebrate genomes in the public NCBI database, only 9 meet our 3.4.2.QV40 metric. Of these 9, 7 were done by members of our G10K group using the above approaches. The other 2 are human and mouse and were only brought to this quality level after billions (human) and millions (mouse) of dollars were spent for continuous correction of these assemblies. However, none of these 9 genomes have been phased and have errors related to haplotype collapsing.

The current pipeline (Figure 1) to meet the 3.4.2.QV40 phased metric with the fewest errors currently achievable consists of a combination of the following approaches: 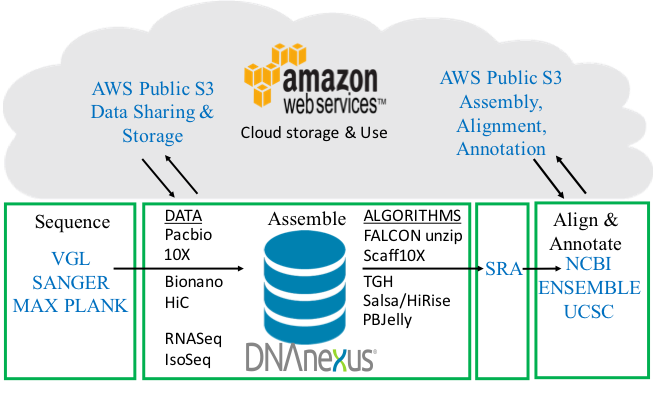 High-quality error-free genome assemblies and annotations are necessary as current 1st and 2nd generation genome sequencing approaches generate numerous errors that cause a variety of problems in downstream analyses. Parts of genes are missing, and some are incorrectly assembled, while others are completely missing from the assemblies despite pieces found in the raw sequence reads. Due to these fragmented, error-prone assemblies, researchers have had to clone, re-sequence, and correct individual genes. In some cases, the gene structures are too complex, too long, or too closely related, preventing even the Sanger-based higher quality 1st generation methods from correcting genome assemblies. In many other instances, investigators do not even know that they are working with incorrect gene sequences and structures, impacting many scientific findings and scientific progress.

Join and Give to the Vertebrate Genome Laboratory

Other ideas? We love ideas! Please direct all inquires below.