Two Rockefeller scientists have been elected to the National Academy of Sciences. Leslie B. Vosshall, Robin Chemers Neustein Professor and head of the Laboratory of Neurogenetics and Behavior, has been named a member, and Jean-Laurent Casanova, senior attending physician, professor, and head of the St. Giles Laboratory of Human Genetics of Infectious Diseases, has been named a foreign associate. They are among 84 new national and 21 new foreign members, the Academy announced April 28.

Established by an act of Congress, the Academy provides independent, objective advice to the federal government and other organizations on matters related to health, science, and technology. New members are elected by their peers based upon their distinguished and continuing achievements in original research. 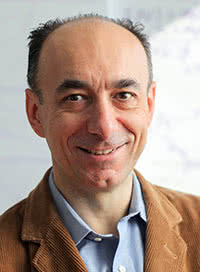 Vosshall works with flies, mosquitos, and humans to study how complex behaviors are controlled by cues from the environment and modulated by an organism’s internal physiological state. Casanova seeks to identify single-gene mutations responsible for “holes” in the immune defenses of otherwise healthy children, rendering them highly susceptible to specific infectious diseases. In addition to their appointments at Rockefeller, both Vosshall and Casanova are investigators with the Howard Hughes Medical Institute.

“Both Leslie and Jean-Laurent have made groundbreaking contributions within their fields,” says Marc Tessier-Lavigne, the university’s president. “Leslie’s research has yielded important new information about how sensory stimuli are processed and perceived. Jean-Laurent’s work on the genetics of pediatric infectious disease has profound implications for affected children, and it has altered the paradigm regarding the relationship between genetic defects and vulnerability to such diseases. It is a great pleasure to see their excellent work acknowledged by the Academy.”

Early work in Vosshall’s lab used Drosophila melanogaster to study the functional neuroanatomy of the olfactory system, the perception of sex pheromones, and the structure and function of the insect odorant receptors. Her more recent work on the genetics of odor and carbon dioxide perception in mosquitos has implications for fighting diseases spread by these insects. Her lab has identified the odorant gene Orco, which gives insects a strong preference for humans, as a potential target for chemical inhibitors, and developed genome editing techniques in the yellow fever mosquito Aedes aegypti, an achievement that opens up new paths of investigation. In addition, human odor perception research within her lab has explored olfactory psychophysics with genetic analysis in order to understand the mechanisms of olfactory perception in humans.

Casanova’s team has identified inborn errors of immunity conferring increased susceptibility to specific pathogens, including mycobacterial diseases, invasive pneumococcal disease, herpes simplex encephalitis, and chronic mucocutaneous candidiasis. He discovered the first cases of Mendelian predisposition to tuberculosis in children and the first major susceptibility locus for this disease in adults. The laboratory is now focused on testing the hypothesis that life-threatening infectious diseases of childhood result from collections of rare single-gene inborn errors of immunity.