When the body's B cell training grounds stay open after hours 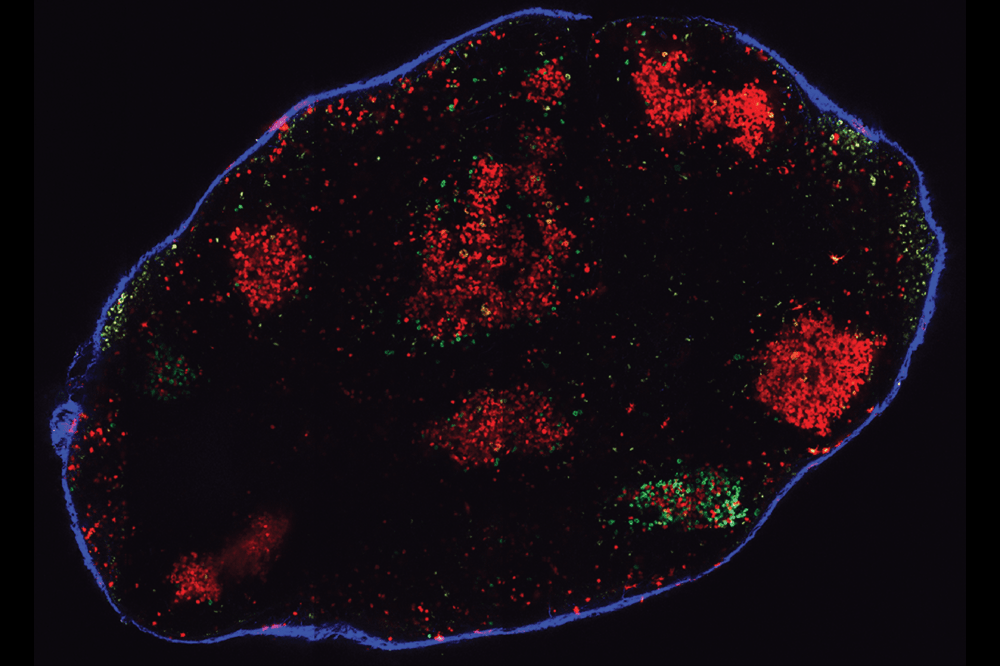 A lymph node with clusters of germinal centers full of mature B cells (red), dotted with less evolved “naive” B cells (green).

If B cells are the munitions factories of the immune system, manufacturing antibodies to neutralize harmful pathogens, then the tiny biological structures known as germinal centers are its weapons-development facilities. Formed in response to infection and vaccination, these microscopic training grounds allow B cells to perfect the antibodies they deploy against specific viruses and bacteria.

Figuring out how germinal centers work is therefore crucial to understanding immunity and developing more effective vaccines. Now, a new study in Cell reveals why some germinal centers persist for months rather than weeks, providing insights that could inform future vaccine design.

Germinal centers form in the body’s lymphatic tissues shortly after vaccination or infection. Once inside a germinal center, B cells undergo rapid mutations and, through a process of natural selection, only B cells with antibodies that most effectively bind to their target antigens survive. These superior B cells then become either plasma cells, antibody factories that secrete copious amounts of antibodies into serum, or memory B cells, which patrol the body for signs of return of the pathogen they evolved to fight.

“The goal of the germinal center is to generate high-affinity plasma cells and memory B cells, that it then exports” says Renan V.H. de Carvalho, a postdoctoral fellow in the laboratory of Gabriel D. Victora at The Rockefeller University.

In mice, most germinal centers shut down after a few weeks, having accomplished their goal of producing high-affinity B cells. But those that form in response to certain respiratory infections, including the flu, can stay in business for more than six months, roughly a quarter of a mouse’s normal lifespan. De Carvalho and his colleagues wanted to understand why these germinal centers are so long-lived, and what precisely goes on inside them.

For the study, the researchers first infected mice with influenza and SARS-CoV-2 viruses, waited for them to form germinal centers, and then sequenced the antibody genes of B cells harvested from those centers over the course of 24 weeks. Much to their surprise they found that, rather than continuously evolving at a steady clip, antibody optimization peaked after 12 weeks and then apparently regressed, even as the center remained active. This puzzling drop-off was due to the continuous introduction of unevolved “naïve” B cells into the germinal centers, researchers later found.

These new recruits did not behave like the original B cells in the germinal center. Subsequent experiments showed that, while the naïve B cells also underwent evolution inside the germinal centers, they did not produce antibodies that could bind to flu or SARS-CoV2 antigens.

“We used to think of infection-induced germinal centers as a single reaction targeting antigens from a particular pathogen,” de Carvalho says. “Apparently it’s not, at least in the case of these long-lived germinal centers.”

But the few original B cells that remained on site were enough to produce efficient immunity against the initial pathogen. When the researchers re-exposed the mice to flu antigens 3 months after they were first infected—effectively mimicking a repeat infection or booster shot—they demonstrated that many of the memory B cells which began pumping out antibodies were descended from the few founder cells that lingered in germinal centers for many months, and not their naïve replacements.

“Even though they constitute a small fraction of the total number of cells later on, the founder cells that stay in the germinal center for a long time are still doing their job,” de Carvalho says. But just how well those founder B cells do their jobs, and whether naïve recruits cramp their style and reduce their efficacy, remains to be seen. Future studies from the Victora lab will address this question.

Meanwhile, the findings already have implications for our general understanding about how germinal centers operate. Understanding the dynamic between founder and naïve B cells could help researchers leverage long-lived germinal centers to produce more effective antibodies against dangerous respiratory viruses, like the flu and SARS-CoV-2.

“The invasion of ongoing germinal center structures by sequential waves of B cells may turn out to be an important factor in predicting germinal center outcomes, possibly well beyond this particular influenza model,” Victora says, “and might give us some insight into how to coax germinal centers to produce the antibodies we need them to.”