Cancer stem cells are fueled through dialogue with their environments 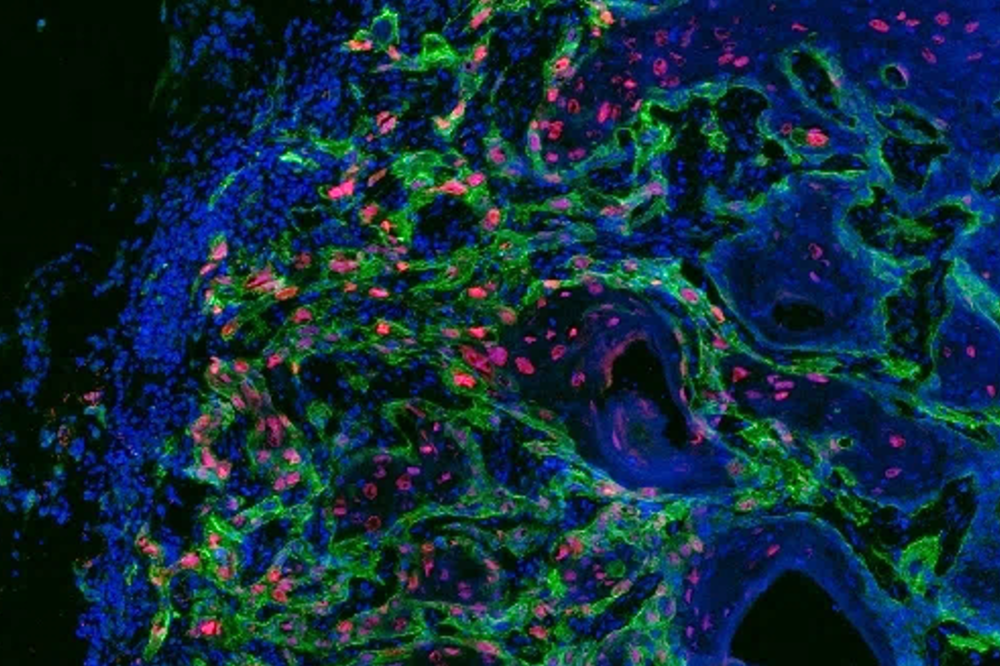 What drives tumor growth? Is it a few rogue cells imposing their will upon healthy tissue, or diseased tissue bringing out the worst in otherwise peaceable cells? Or is it a back-and-forth, a dialogue between the two? According to a new study, it may be the latter, at least when it comes to the progression of one common skin cancer.

Researchers found that a single mutated gene in an otherwise healthy stem cell can kick off an increasingly deviant feedback loop of miscommunication between the cancerous stem cell and its surrounding tissue, fueling the development of a malignant tumor. The findings suggest that many of the mutations in cancer may simply be setting in stone a path already forged by the tumor stem cell’s aberrant dialogue with its surroundings. If these results, published in Nature, prove broadly applicable, the findings could pave the way for novel approaches to treating a range of cancers.

“It’s not just that cancer molds the microenvironment, or that the environment affects the tumor,” says first author Shaopeng Yuan, a graduate student in the laboratory of Elaine Fuchs at The Rockefeller University. “Our study shows that there is crosstalk between the microenvironment and the stem cells in tumors. They communicate with each other and create a loop of tumor-promoting factors.”

At the heart of almost every tumor is a small subset of cancer stem cells. Resistant to chemotherapy and immunotherapy, these malignant seeds are the cells responsible for keeping the tumor alive and are key players in the process that turns benign growths into metastatic disease. And behind many cancer stem cells, including those of skin, pancreatic, lung, and colorectal cancers, is a RAS gene that, when mutated, allows tissue stem cells to ignore normal environmental signals and deviate from their natural course, promoting out-of-control tissue growth.

To better understand the finer points of that interaction, Yuan and colleagues turned their attention to squamous cell carcinoma, a skin cancer linked to RAS mutations. The team started off by inducing mutant HRAS (the member of the RAS family most common in skin cancers) in individual skin stem cells, and monitoring how the cancerous stem cells interacted with the surrounding tissue. “Over time, the dialogue between the cancer stem cell and its microenvironment became more and more aberrant,” Fuchs says. “As we deciphered the dialogue, we realized that the miscommunication between the stem cell and its microenvironment resulted in the activation of much the same pathway that is active in the corresponding human cancers that harbor a high mutational burden.”

This observation raised an intriguing possibility. Perhaps many cancer mutations do not set the course of a disease so much as lock it in place, affirming a malignant progression already determined by aberrant crosstalk between a cancer stem cell and its microenvironment.

A surprising role for leptin signaling

Further investigating how the cancer stem cell changed as it confronted this new self-imposed malignant tumor microenvironment, the team realized that the invasive cancer stem cells had unexpectedly begun to express the leptin receptor, Lepr. A hormone produced by fat cells and linked to obesity, leptin seemed out of place in non-obese mice carrying non-fatty tumors. Lepr is not expressed in normal epithelium and rarely seen in benign tumor cells. Here it showed up unexpectedly in the cancer stem cells of the advanced stage of the tumor, known as squamous cell carcinoma (SCC).

Yuan used CRISPR technology to show that Lepr and leptin receptor signaling was essential for progression from the benign to malignant state. But where was the leptin coming from? There was no apparent increase in fat cells that would explain the leptin and neither the benign growths, the advanced tumor cells, or the tumor microenvironment seemed to express the leptin gene. Yet, the malignant tumor expressing the leptin receptor greatly benefited from the presence of leptin—the more leptin, the faster it grew.

The team began to wonder whether leptin that normally circulates in the bloodstream was arriving at the tumor via the blood vessels that bring nutrients and other factors to the tumor. Through a series of experiments, they provided compelling evidence that this was the case. Moreover, they went on to demonstrate that Lepr/leptin signaling within the cancer stem cells stimulated many of the pathways known to be hyperactivated in cancers, including the PI3-kinase, AKT and mTOR pathways. Taken together, the researchers unraveled how a single oncogene could trigger a self-perpetuating series of miscommunications between the stem cell and its environment leading to malignancy.

The team is now investigating ways to block the leptin receptors in tumors as in doing so, it could throw a molecular monkey wrench into the vicious loop and derail the cancer. “The leptin receptor/leptin crosstalk between cancer stem cells and the microenvironment drives a positive feedback loop that fuels malignancy,” Yuan says. “If we block this loop, which is a major pathway driving tumor progression, perhaps we can block tumor progression.”

Squamous cell carcinomas affect not only skin, but also esophagus, head and neck, lung and other epithelial tissues and, together, comprise the sixth most common cancer world-wide. But the implications of the findings extend beyond this particular cancer. Cancer biologists generally assume that the changes in gene expression that drive tumor progression are the result of many accumulating mutations within a cell, but from a stem cell biologist’s view, this work shows how a single oncogenic mutation can set events in motion that will drive cancer forward by aberrant exchange with the tumor microenvironment, independent of subsequent mutations.

“Our study shows that one oncogenic mutation can hijack a pathway and achieve the same thing as many cumulative mutations,” Yuan says. “We are always looking for mutations, but we must not forget to think about how to stop signaling pathways that drive tumor growth.”