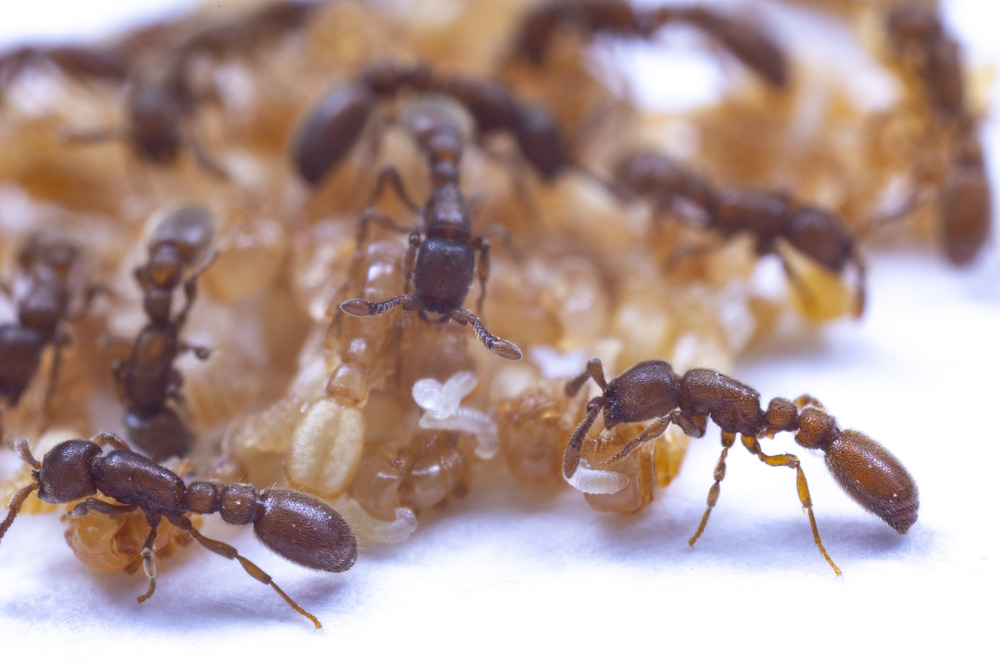 A nest of clonal raider ants with workers, pupae, and young larvae. The workers have placed the young larvae on the pupae, where they feed on pupal secretions. (Daniel Kronauer)

Life in an ant colony is a symphony of subtle interactions between insects acting in concert, more like cells in tissue than independent organisms bunking in a colony. Now, researchers have discovered a previously unknown social interaction that unites the colony, linking ants across developmental stages—adults, larvae, and pupae, an immobile stage, not unlike a butterfly’s chrysalis, during which ants transition from larvae to adults.

The study, published in Nature, reveals that pupae secrete a never-before observed fluid that adults and larvae immediately drink. The health of the entire colony appears to hinge on the prompt consumption of this nutrient-packed fluid—the larvae need it to grow and, if adults and larvae fail to drink it, the pupae die of fungal infections as the fluid builds up around them. “The way that ants use this fluid creates a dependency between different developmental stages,” says Daniel Kronauer, the Stanley S. and Sydney R. Shuman Associate Professor at The Rockefeller University.

“It just shows to what extent ant colonies really operate as an integrated unit.”

Ants operate within the bustle of a busy colony, posing difficulties for researchers trying to observe the various interactions among ants that keep the colony running smoothly. “These interactions lie at the very heart of understanding insect societies but, because of the inherent challenges, they haven’t been investigated systematically,” says Orli Snir, first author on the study and postdoc in Kronauer’s lab. To tackle this problem head-on, Snir decided to reverse engineer the ant colony in order to identify some of the key principles that drive social interactions. To do so, she removed ants at different developmental stages from the colony and examined how social isolation affected the insects.

One of the first things she noticed was fluid building up around isolated pupae. Insects do not normally secrete fluid at the pupal stage, and such fluid had never been observed in ants either. This fluid was prone to fungal infections which eventually killed the pupae. Only when Snir removed the fluid manually did the pupae survive into adulthood. Clearly, the ant colony was somehow preventing pupal fluid from building up.

Kronauer, Snir, and colleagues conducted dye tracing experiments to figure out where the fluid was going and, when they discovered that adults and larvae were drinking it, they began exploring the fluid’s composition and observing what happened to ants that did not partake.

The researchers discovered that the fluid is derived from a conserved process found in all insects called molting, in which insects shed their old cuticle to grow. While non-social insects recycle the molting fluid to conserve nutrients, ant pupae share it with their nestmates.

The fluid is rich in nutrients, the researchers found, as well as psychoactive substances, hormones, and some components found in the royal jelly that honeybees reserve for queen bee larvae. And while ants of all ages seem to enjoy the fluid, young ant larvae need it—those deprived of the fluid in their first four days of life fail to grow, and many eventually die.

“The first few days after hatching, larvae rely on the fluid almost like a newborn relies on milk,” Kronauer says. “The adults also drink it voraciously and, although it’s not clear what it does to the adults, we’re confident that it impacts metabolism and physiology.”

After conducting the initial study in clonal raider ants, Kronauer’s team found the same general phenomenon among each of the five major ant subfamilies, suggesting that the strategy of co-opting molting fluid into a nutritious signaling fluid is highly conserved, Kronauer says. “It probably evolved once, early in ant evolution, or even preceding ant evolution.”

Anatomy of a superorganism

The ant colony is sometimes referred to as a superorganism—one unified entity composed of many organisms working in concert. Indeed, ants relay information by swapping chemical signals in ways analogous to how cells communicate in tissue. These include pheromones, which often convey short-term information, and social fluids, which have the potential to effect long-term metabolic and behavioral changes. The discovery of the pupal social fluid and its role in connecting adults, pupae, and larvae, adds context to this understanding of ant colonies as interdependent superorganisms.

“Pupal social fluid is the driving force behind a central and hitherto overlooked interaction network in ant societies,” Snir says. “This reveals a new aspect of dependency between larvae and pupae, and pupae and adults.”

In future studies, the team will further explore the effects of this molting fluid on the inner workings of the colony. Kronauer is particularly interested in determining whether molting fluid plays a role in deciding the caste of ant larvae, and whether and how it affects the behavior of adults. “This study only provides a glimpse into the intricate interaction networks of insect societies,” Snir says. “Our long-term goal is to gain a deep understanding of the neural and molecular mechanisms governing social organization, and how these mechanisms evolved.”