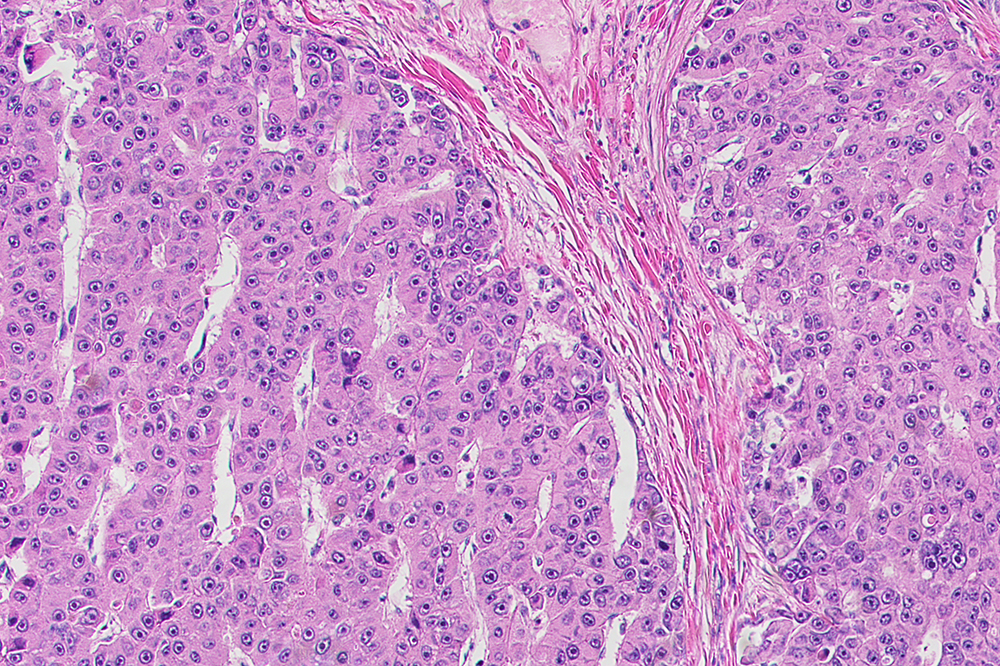 Fibrolamellar tumors cells, pictured here, are “addicted” to a mutated oncogene that may prove to be an ideal drug target.

A rare and lethal liver cancer that disproportionately harms young adults, fibrolamellar carcinoma is nearly incurable. Surgery can remove the tumor, but no existing therapies are capable of reining in the cancer once it starts to spread throughout the body.

Now, a new study demonstrates that fibrolamellar tumors need one specific mutation in order to thrive, and that impeding the mutated oncogene reduces tumor growth in mice. The findings, published in Clinical Cancer Research, highlight a promising drug target for an intractable disease, and may lead to novel therapies.

“This mutation not only initiates the tumor but drives it forward—the tumor is essentially addicted to it,” says Christoph Neumayer, first author on the study and a graduate student in Sanford M. Simon’s laboratory at The Rockefeller University.

The current study builds on work that began shortly after Simon’s daughter, Elana, was diagnosed with fibrolamellar at age 12. In 2014, the younger Simon collaborated with her father to sequence fibrolamellar tumor genomes from 15 patients. One mutation, common to each of the patients, stood out. “The genomes were extremely clean with one exception—a mutation that fused two genes together, known as a fusion oncogene,” Sanford Simon says.

Simon and colleagues later engineered this fusion oncogene in mice and demonstrated that it could lead to tumor growth. “The tumor in mice looked exactly like the tumor in humans,” Simon says. “By 2017, we knew that this fusion gene was all we needed to trigger the cancer.”

But whether the fusion gene would make a good drug target remained unclear. One problem was that this particular oncogene is what drug developers often call “undruggable.” The DNA for the oncogene is slightly different in each patient, while the protein produced by the DNA, which is the same in all patients, is very similar to healthy protein. Put simply, a therapy aimed at the oncogene DNA would miss its mark, while one aimed at the protein would harm the entire body.

Neumayer hoped to get around this by targeting the oncogene’s mRNA, an intermediary between DNA and protein. The mRNA is similarly abnormal in all patients, yet different enough from healthy mRNA that a drug could target it without causing collateral damage.

Still, lingering concerns remained. What if the lab developed a therapy to target the mRNA, only to discover that a tumor in-progress could continue to grow without the oncogene? This very problem had derailed previous attempts to treat lung and colon cancers associated with the KRAS oncogene. After blocking the oncogene, researchers were dismayed to discover that even tumors dependent on KRAS can simply evolve to grow without it.

“Just because an oncogene initiates a tumor doesn’t mean that oncogene is a good drug target, or necessary for tumor growth,” Neumayer says. “We needed to first figure out whether fibrolamellar tumor cells would die if we removed the oncogene—or just mutate and escape.”

But there was still hope. Simon, Neumayer, and colleagues knew that drugs targeting another fusion oncogene linked to cancer, known as BCR-ABL, were enough to completely eradicate certain leukemia tumors. So they set out to determine whether targeting the oncogene behind fibrolamellar, known as DNAJB1-PRKACA, would reduce tumor growth in mice.

After testing several small molecule candidates on human cancer cells, the team settled on a particular shRNA that proved most effective against the oncogene. shRNAs are short sequences of RNA that bend in a hairpin shape and can be engineered to target mRNA. When the researchers used this shRNA to treat fibrolamellar tumors in mice, the therapy completely stopped tumor growth and caused many tumors to shrink or disappear.

“This shows that the fusion oncogene is not only needed to trigger fibrolamellar but also to maintain its growth—if you get rid of the gene, the tumor cells die,” Simon says. “Targeting the fusion gene could therefore be a powerful approach to treating this cancer, as well as other cancers driven by fusion genes.” Indeed, many pediatric cancers (some of which are considered undruggable) involve similarly ubiquitous mutations that fuse two genes together.

The team is now working to refine their shRNA into a drug-like molecule. “We have really good preliminary results,” Neumayer says. “And if we show that targeting mRNA works in fibrolamellar, that may inspire others to go after fusion genes that drive other cancers, too.”