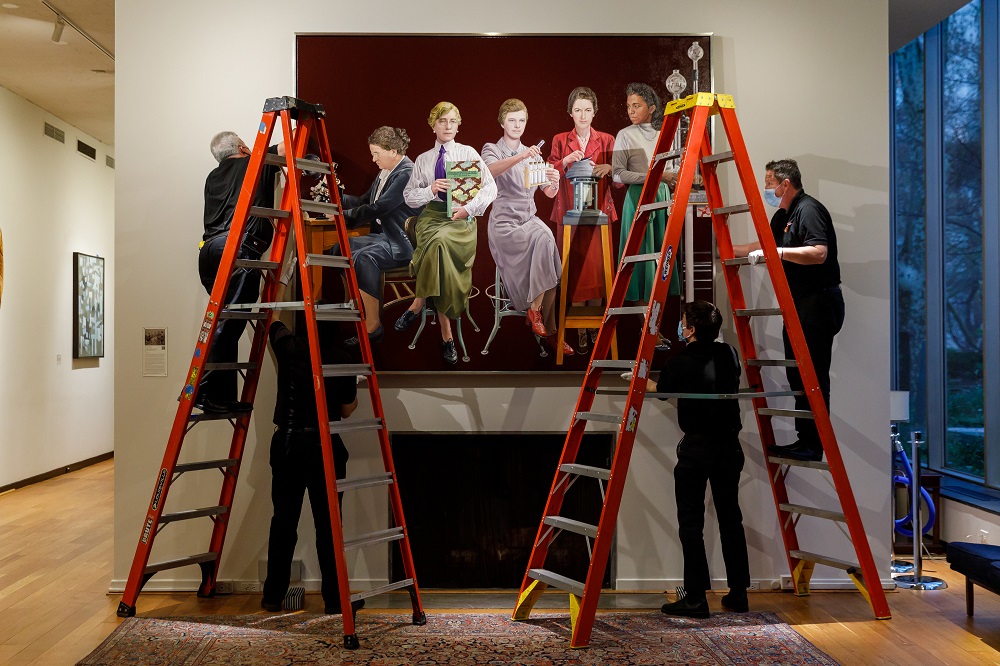 Until this spring, The Rockefeller University art collection contained 35 portraits—all depicting historical male scientists and benefactors. But on April 14, when a new portrait by artist Brenda Zlamany was unveiled over the fireplace in the Abby Aldrich Rockefeller Reception Hall, five preeminent women scientists joined the university’s portraiture collection.

“Discoveries made at Rockefeller in those early years influenced science for decades to come. This project was about reviving a rich history of scientific brilliance by women at Rockefeller and making their stories known,” said Rockefeller graduate student Audrey Harnagel during the portrait’s unveiling.  “Seeing these five women is a reminder that scientific excellence is not biased toward a particular type of body.”

Harnagel, who is also the president of the student group Women in Science at Rockefeller (WISeR) and served on the committee that commissioned the portrait, added that the artwork is a promise to future generations, as well. “Those who were once overlooked or overwritten in our scientific history will be no longer,” she said.

“They are all trailblazers—forerunners for the women who followed them. At the foremost, though, they are scientists,” said Leslie B. Vosshall in describing each person’s scientific accomplishments and biographies. Vosshall, who is Rockefeller’s Robin Chemers Neustein Professor, was also on the committee that commissioned the portrait.

From left to right, the portrait features Florence Sabin, whose career bridged basic biology and healthcare reform. Sabin, who is widely known for her contributions to understanding the immune response to tuberculosis infections, became the first woman at Rockefeller to be hired as a full professor, in 1925. After leaving the university in 1938, she fought to modernize public-health law in Colorado and helped to reorganize the state’s department of health—work for which she received the prestigious Lasker Award.

Beside Sabin sits Louise Pearce, a physician-pathologist who in 1913 became the first woman appointed to a research position at Rockefeller. During an outbreak of African sleeping sickness, she traveled to the Congo to perform field studies in the pressing search for a treatment. Her trials of a drug called Tryparsamide cured about 80 percent of patients and became the standard treatment for African sleeping sickness in its day. Her later work also helped the development of early animal models for the study of cancer.

The cover of the notebook pictured in Pearce’s arms is an amalgam of one of her scientific publications and a publication by Heterodoxy, a feminist organization active in New York City in the early 20th century of which Pearce was a member. In the painting, she is wearing a New Jersey charm bracelet that was a gift from Sara Josephine Baker, with whom she lived on a farm in the garden state, with Ida A. R. Wylie.

At the center of the painting, holding a rack of test tubes, is Rebecca C. Lancefield, a bacteriologist who joined Rockefeller in 1918 as a technical assistant and retired 60 years later as a professor. She famously devised a system for classifying subtypes of streptococcal bacteria. At the time of her investigations, the United States had entered WWI and strep infections were a scourge on military bases; but scientists did not know what strains of bacteria were responsible for these outbreaks or how animal and human strep differed from each other. Lancefield’s approach to classification helped answer these questions and remains a ubiquitous part of American medical education. Her research also laid the groundwork for understanding a variety of diseases, including scarlet fever and acute kidney disease.

Gertrude E. Perlmann stands beside Lancefield. She escaped Czechoslovakia at the beginning of World War II and was recruited to Rockefeller in 1946. With a dual background in physics and chemistry, Perlmann utilized methods such as electrophoresis that were cutting edge for the time. At Rockefeller, she used these techniques to explore how structural changes influence the chemical properties of proteins. Through her meticulous study, Perlmann was able to determine the three-dimensional shape of pepsin—an enzyme in the stomach that digests proteins—and uncover its role in digestive disorders such as acid reflux.

Perlmann, widely considered an expert in protein chemistry, was a guest professor at Rockefeller until 1951 when she became an assistant professor. In 1958 she became an associate professor, but it was not until 1973 that she became a full professor. As often is the case for women seeking career advancement, promotion was a protracted process. A year after finally obtaining the rank of professor, Perlmann died from cancer.

Looking back toward Sabin is Marie M. Daly, the first Black woman in the United States to receive a Ph.D. in chemistry, and a postdoctoral fellow at Rockefeller from 1948 to 1955. During her time at Rockefeller, Daly studied nuclear proteins including histones, the proteins around which DNA wraps. After moving on to the Albert Einstein College of medicine, she helped link hypertension and high cholesterol to a higher risk of heart attack. In her later years, she also did significant research into the uptake of creatine by muscle cells.

Beyond her scientific endeavors, Daly was committed to mentorship and creating more opportunities for other women and minorities in the sciences. On this subject, she leant her expertise to professional scientific organizations and, in honor of her parents, established a scholarship fund for minority students studying physics or chemistry at Queens College, the alma mater where she earned her B.A. and M.A. degrees.

The committee also selected a renowned Brooklyn-based artist, Brenda Zlamany, for the commission. Zlamany undertook an extensive creative process in executing the portrait committee’s vision. She interviewed scientists on campus who knew about the portrait honorees, examined instruments from the on-campus Merrill W. Chase Historic Instrument Collection, and researched the kinds of clothes and accessories the subjects might have worn. “Everything in this portrait is significant and comes from Rockefeller, even the furniture,” says Zlamany. Before she started painting, Zlamany also created a series of paper cutouts that she arranged in various group formations; the final assembly of these cutouts is also framed and currently displayed on an adjacent wall in the Abby Reception Hall.

“These scientists provided wonderful companionship, inspiration, and entertainment as I uncovered their stories. It is my hope that they will continue to fascinate and inspire generations to come,” said Zlamany.

The portrait was fully funded by Rockefeller faculty, staff, alumni, and other university supporters. Many of the donors made gifts in honor of women who inspired them.

Watch this video to learn more about the project and unveiling ceremony.