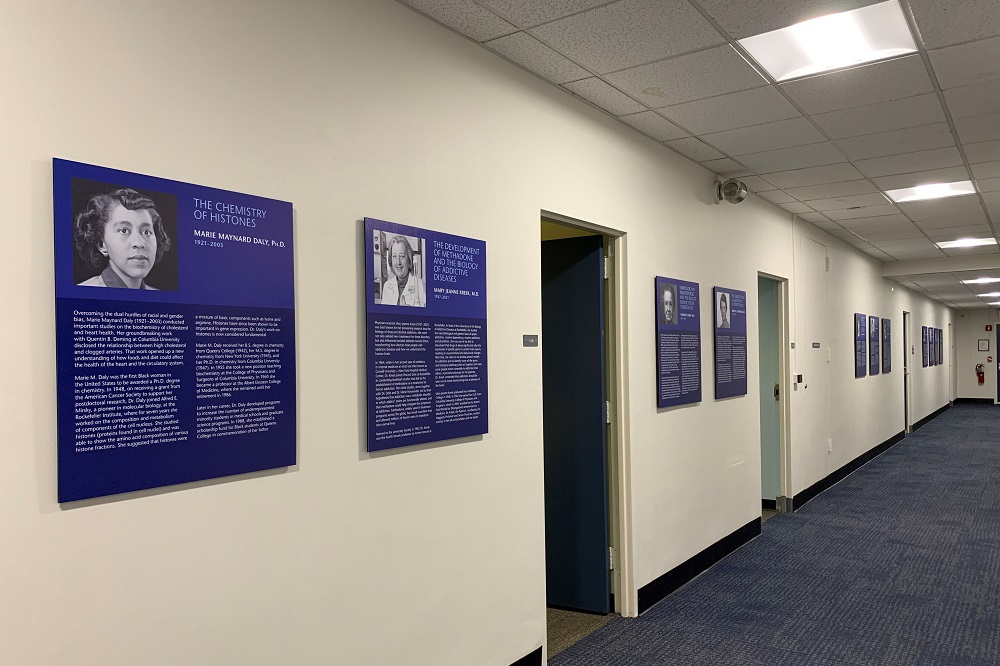 The new first floor exhibit is in the hospital’s easternmost hallway.

Scientists who are women have been doing groundbreaking research at Rockefeller since the institute’s earliest days at the beginning of the 20th century. However, they have often remained absent from the portraiture adorning university walls. A new exhibit on the first floor of The Rockefeller University Hospital aims to remedy this omission.

The installation consists of placards with historical photos and details about the research of 11 women scientists at Rockefeller. One such scientist, Marie Maynard Daly, helped to disclose the relationship between high cholesterol and clogged arteries during her graduate work, and came to Rockefeller as a postdoctoral researcher in the lab of Alfred E. Mirsky. She performed fundamental research examining the chemical composition of histones, which are critical to gene expression. Daly, who was the first Black woman in the United States to be awarded a Ph.D. in chemistry, was a professor at numerous venerable institutions and went on to develop programs to increase the number of underrepresented minority students in medical schools and graduate level research.

A more recent Rockefeller researcher featured in the exhibit is Mary Jeanne Kreek, who passed away earlier this year. Kreek was a physician-scientist best known for her pioneering research into the biology of drug and alcohol addiction. The other scientists featured in the exhibit are Alma E. Hiller, Clara J. Lynch, Clara Nigg, Florence Sabin, Lillian E. Baker, Louise Pierce, Margaret Pittman, Nancy P. Ellicott, and Rebecca C. Lancefield.

The display also includes a variety of historical photographs of the hospital, including its construction in 1909, an early oxygen chamber for treating pneumonia from around 1920, and many others.

The exhibit was designed in consultation with Women in Science at Rockefeller (WISeR) and Leslie B. Vosshall, Rockefeller’s Robin Chemers Neustein Professor, as well as the Hospital’s administration, the Development office, Communications and Public Affairs, and the Library.