Mary Jeanne Kreek, pioneer in studies of addiction, has died 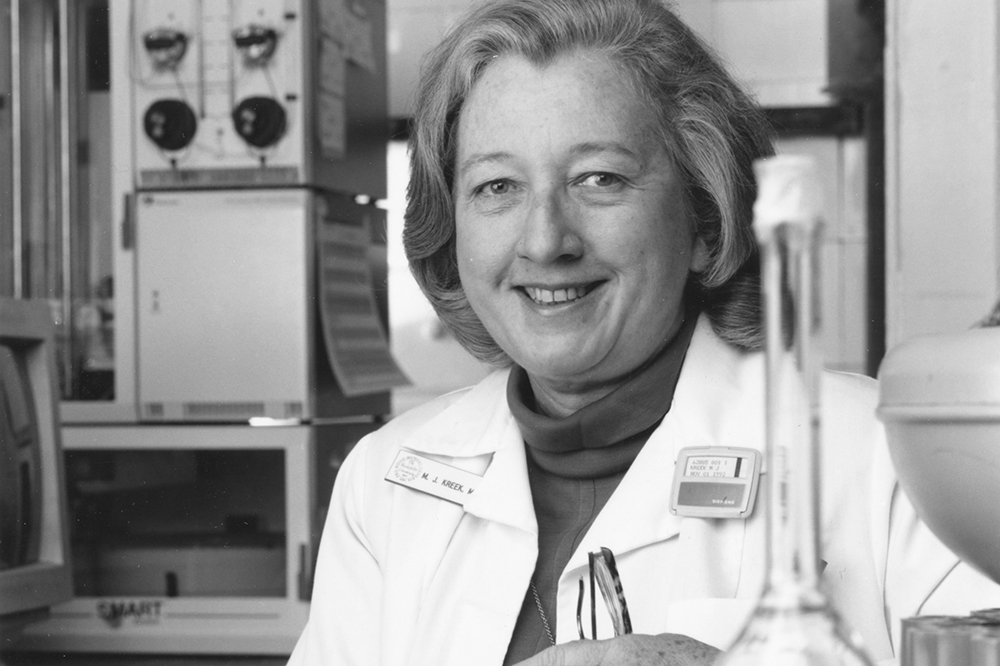 Physician-scientist Mary Jeanne Kreek, the Patrick E. and Beatrice M. Haggerty Professor and a senior attending physician at The Rockefeller University, died March 27 at the age of 84. Kreek was best known for her research into the biology of drug and alcohol addiction. Her work not only yielded new treatments for these disorders, but also influenced societal attitudes toward them.

Kreek conducted landmark studies that led to the establishment of methadone as a treatment for heroin addiction. The drug, which Kreek and her colleagues developed more than 50 years ago, has been widely used in treatment programs across the globe. It has saved countless lives and allowed millions of heroin users to transition into normal lives.

“Mary Jeanne was a pioneer in the biology of addiction research and made seminal contributions that led to methadone’s successful use as a treatment for heroin addiction,” says Richard P. Lifton, Rockefeller’s president. “She was a beloved member of the Rockefeller community, notable for her extraordinary commitment to her research, to patients, and to the advancement of women in science. She will be remembered both for her dynamism as a scientist and her humanism as a physician, patient advocate, and mentor.”

In her second year of residency in internal medicine at what was then known as Cornell University–New York Hospital Medical Center, Kreek had the opportunity to do a research elective at Rockefeller in the lab of physician-scientist Vincent Dole. Her initial studies, conducted together with Dole and Marie Nyswander, led to their hypotheses that addiction was a metabolic disorder in which addicts’ brains are functionally altered, and that methadone could help mitigate the symptoms of addiction. The team published their first groundbreaking paper showing that methadone can be used to fight heroin abuse in 1966.

In the early 1970s, Kreek developed the first laboratory techniques for measuring methadone and similar drugs in blood and tissues. Using this method, she was able to design studies on the physiological effects and safety of methadone use, investigations that became crucial to the Food and Drug Administration’s 1973 approval of methadone as a component of treatment for opiate addiction. Kreek was also involved in developing a second medication called buprenorphine, which acts on the same receptor as methadone.

Throughout her lifetime, Kreek often talked about the stigma of drug addiction. She contended that addictions should be seen not as weaknesses or criminal behaviors, but as diseases of the brain. In talks and in her writing, she was critical of the tight regulation of methadone and buprenorphine in the United States, pointing out that it made it hard for treatment centers to offer these drugs.

In 1985, Kreek was one of the first to document that drugs of abuse significantly alter the expression of specific genes in certain brain regions, resulting in neurochemical and behavioral changes. After that, she went on to develop animal models for addiction and to identify many of the genes and biological pathways that act together and make someone more likely to become addicts.

More recently, her lab identified more than 100 changes in the DNA code associated with addiction not only to opioids but also to cocaine, alcohol, and marijuana. She found that several of these changes were also associated with atypical responses to stress, potentially leading to an increased tendency to become addicted. Her work on the genetic changes linked to addiction has ongoing implications for developing new ways to recognize and treat addictions to a number of different substances.

Kreek maintained an active research program and a ran a busy lab right up to her death. She was a generous mentor, a powerful advocate for her patients, and a passionate supporter of biomedical science. She was a consistent presence at lectures and events on the Rockefeller campus.

“Mary Jeanne was a giant in bidirectional translational research, bringing the most rigorous science to improving the lives of millions of individuals who were marginalized by society, and even by much of the medical community,” says Barry Coller, Physician-in-Chief of The Rockefeller University Hospital. “Her legacy is extraordinarily rich, most notably in the innumerable trainees she not only mentored, but then went on to champion throughout their careers. She epitomized and lived each day the highest ideals of academic medicine.”

“Mary Jeanne was a brilliant physician-scientist who used her protean intellect and her seemingly boundless energy to make the world a better place,” says Sarah J. Schlesinger, associate professor of clinical investigation and a senior attending physician. “A generous teacher and mentor to young physician-scientists around her, she was particularly passionate about supporting other women.”

Kreek was born in Washington D.C. in 1937, and grew up there. She graduated from Wellesley College in 1958. She earned her M.D. from Columbia University College of Physicians and Surgeons in 1962, followed by her residency in internal medicine at what is now Weill Cornell Medicine. She joined Rockefeller as an associate physician in 1964 and was named to the faculty in 1967. Kreek was only the fourth female professor to receive tenure at Rockefeller, after Florence Sabin, Rebecca C. Lancefield, and Mary E. Hatten. She was also affiliated with New York-Presbyterian Hospital and served as a clinical assistant professor at Weill Cornell Medicine for several years in the 1970s.

Kreek received numerous awards including the Betty Ford Award in 1996; the Specific Recognition Award for Research in the Science of Addiction from the Executive Office of the President in 1998; the R. Brinkley Smithers Distinguished Scientist Award and Nathan B. Eddy Memorial Award, both in 1999; the Wellesley College Alumnae Achievement Award in 2012; and a Lifetime Science Award from the National Institute on Drug Abuse at the National Institutes of Health in 2014. She was a fellow of the New York Academy of Sciences and an honorary fellow of the American College of Psychiatrists. She served as chair of the board of the College on Problems of Drug Dependence and, up until the time of her death, served on the board of the Windward Islands Research and Education Foundation (WINDREF). She received honorary doctorates from the University of Uppsala in Sweden in 2000, Tel Aviv University in 2007, and the University of Bologna in 2010.

Read a 2020 Q&A with Kreek, “The long overdue science of addictions,” from Seek magazine.