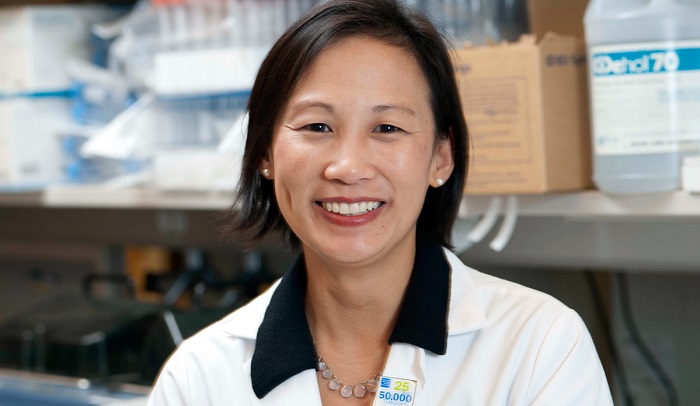 Katharine Hsu, a physician-scientist who specializes in immunology research and treatment of blood cancers, has been named director of the Tri-Institutional M.D.-Ph.D. Program, a joint program between Weill Cornell Medicine, The Rockefeller University, and Memorial Sloan Kettering Cancer Center.

In her new role, Hsu will work to diversify matriculating classes and train students to become skilled leaders as both clinicians and biomedical researchers, bridging the two areas and bolstering the vital partnership that leads to breakthroughs in medicine. Hsu will succeed Olaf Andersen, who has directed the program for 25 years, blending the cultures of the three institutions into one expanded training program and boosting its national profile.

“Dr. Hsu is herself an exemplar of the impact physician-scientists can have in biomedicine; she well understands the crucial role that graduates of this dual-degree program will play in the next generation of biomedical research,” said Richard P. Lifton, president of The Rockefeller University. “Coupled with the respect she commands in the Tri-Institutional community and her strong commitment to increasing diversity in both medicine and science, she will be a great leader for the program, building on Dr. Andersen’s legacy of excellence.”

Founded in 1972, the Tri-Institutional M.D.-Ph.D. Program awards a medical degree from Weill Cornell Medical College and a doctorate from either the Weill Cornell Graduate School of Medical Sciences, Gerstner Sloan Kettering Graduate School of Biomedical Sciences or The Rockefeller University. The program has trained more than 400 physician-scientists working in a range of areas in clinical medicine, scientific research, and education. Through a rigorous course of study and access to research mentors in top laboratories at all three institutions, the Tri-Institutional M.D.-Ph.D. Program seeks to prepare its students to serve as leaders in the field of biomedical research, while also promoting communication and collaboration among the partner institutions.

Hsu earned her doctorate in cell biology in 1993 from Weill Cornell Graduate School of Medical Sciences, where she studied in the laboratory of Moses Chao, and earned a medical degree in 1994 from Weill Cornell Medical College. She went on to complete an internship and residency in internal medicine at Brigham and Women’s Hospital and a post-doctoral fellowship in hematology and oncology at Memorial Sloan Kettering before joining its faculty.

Hsu studies natural human killer cells and their role in recognizing and killing cancer cells and cells infected with viruses. Her findings on the genetics and biology of these cells have contributed to treatments of cancers, including leukemia and neuroblastoma. As a clinician, Hsu treats patients with bone marrow disorders, leukemias and lymphomas, and she currently sees patients as an attending in the inpatient Bone Marrow Transplantation Service at Memorial Sloan Kettering.

For more information, read the news release on Hsu’s appointment.