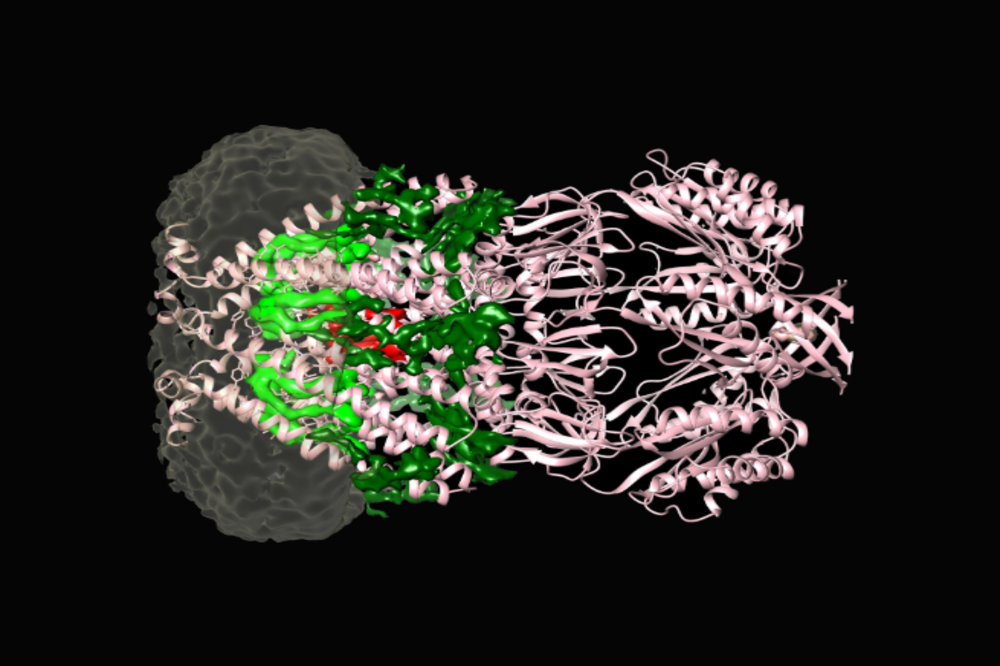 Almost all bacteria rely on the same emergency valves—protein channels that pop open under pressure, releasing a deluge of cell contents. It is a last-ditch effort, a failsafe that prevents bacteria from exploding and dying when stretched to the limit. If we understood how those protein channels worked, antibiotic drugs could be designed to open them on demand, draining a bacterium of its nutrients by exploiting a floodgate common to many species.

But these channels are tricky to operate in the lab. And how precisely they open and close, passing through a sub-conducting state and ending in a desensitized state under the influence of mechanical forces, remains poorly understood. Now, new research from the laboratory of Rockefeller’s Thomas Walz introduces a novel method to activate and visualize these channels, making it possible to explain their function. The findings shed light on key membrane proteins in bacteria, and the same method can be used to improve our understanding of similar channels in humans.

“We were actually able to see the entire cycle of the protein channel passing through a series of functional stages,” Walz says.

Walz has long focused upon MscS, a protein embedded in bacterial membranes that opens in response to mechanical force. MscS proteins exist in a closed state while resting in a thick membrane. Scientists once suspected that, when fluid build-up causes the cell to swell and puts tension on the membrane, it stretches so thin that its proteins protrude. Thrust into an unfamiliar environment, the protein channels snap open, releasing the contents of the cell and relieving pressure until the membrane returns to its original thickness and its channels slam shut.

But when Yixiao Zhang, a postdoctoral associate in the Walz group, tested this theory over five years ago, reconstituting MscS proteins into small custom-designed membrane patches, he discovered that it was impossible to prise the channel open by thinning membranes within the natural range. “We realized that membrane thinning is not how these channels open,” Walz says.

These custom patches, called nanodiscs, allow researchers to study proteins in an essentially native membrane environment and to visualize them with cryo-electron microscopy. Walz and Zhang resolved to push the limits of nanodisc technology, removing membrane lipids with β-cyclodextrin, a chemical used to excise cholesterol from cell cultures. This induced tension in the membrane, and Walz and his team could observe with cryo-electron microscopy as the channel reacted accordingly—eventually snapping closed for good, a phenomenon known as desensitization.

What they observed matched computer simulations, and a new model for the function of MscS emerged. When fluid builds up inside the cell, they found, lipids are called in from all corners to help ease tension throughout the membrane. If the situation becomes dire, even lipids associated with the MscS channels flee. Without lipids keeping them closed, the channels have the legroom to pop open.

“We could see that, when you expose the membranes to β-cyclodextrin, the channels open and then close again,” Walz says.

Walz and Zhang’s new method of manipulating nanodiscs with β-cyclodextrin will allow researchers studying dozens of similar mechanosensitive protein channels to, at long last, test their hypotheses in the lab. Many such proteins play key roles in humans, from hearing and sense of touch to the regulation of blood pressure. Of more immediate interest, however, is the prospect of exploiting protein channels that many different bacteria rely upon to survive. Novel drug targets are a particular necessity, given the rise of dangerous antibiotic resistant bacteria such as MRSA.

MscS and the related bacterial protein channel MscL are “extremely interesting drug targets,” Walz says. “Almost every bacterium has one of these proteins. Because these channels are so widely distributed, a drug that targets MscS or MscL could become a broad-spectrum antibiotic.”