How cells use mechanical tension sensors to interact with their environment 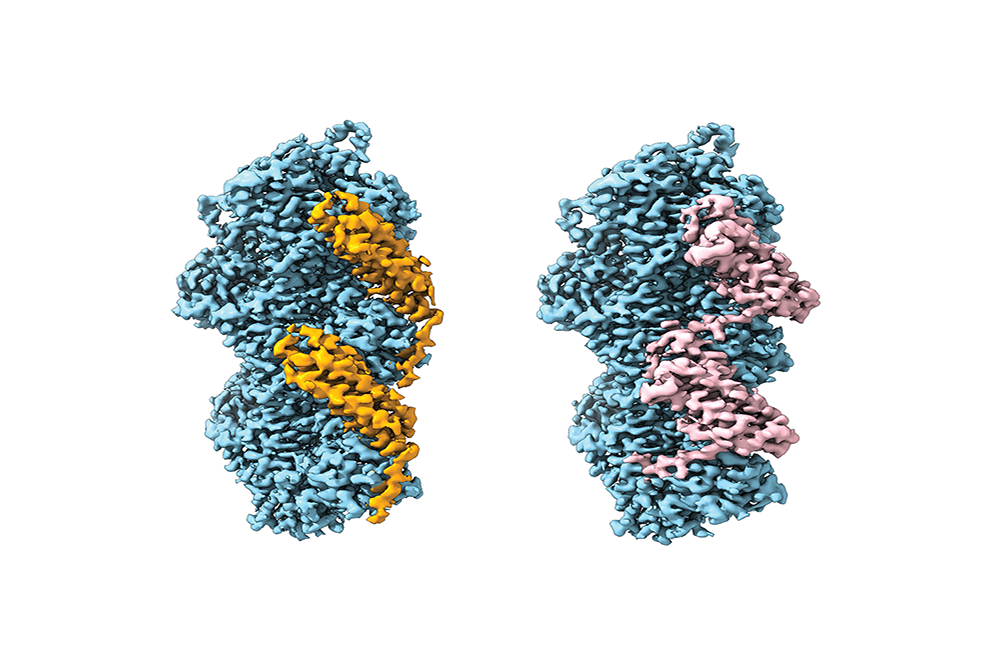 Actin is among the most abundant proteins in cells, and it has many jobs—from giving the cell its very shape and structure to managing networks of proteins crucial to numerous cellular functions. Without it, the fragile fundamental unit of life would crumble.

A good deal of actin’s activity is based on mechanical signaling; it appears to somehow sense physical feedback from the environment and respond accordingly. Now, a new study in eLife describes how this mechanical signaling works. By literally stretching individual actin filaments, the researchers determined a process by which actin transmits cellular mechanical messages to other proteins. Because hundreds of different proteins bind actin filaments, the implications of this discovery are far-reaching and may ultimately explain how cells mechanically control movement—including how cardiac cells contract or how motile cells move.

“The idea that actin filaments could potentially be tiny stretchy tension sensors in the cell has been banging around in the literature for a while, but I think we really proved it here,” says Gregory M. Alushin, assistant professor and head of the Laboratory of Structural Biophysics and Mechanobiology. “We’re just now beginning to understand the nuances of mechanical signaling in the cell.”

In search of a mechanical signal

The lifecycle of a cell is intimately tied to chemical signaling, in which well-studied networks of ligands and receptors feed information to the cell and determine whether it grows, divides, migrates, or dies. But physical forces also pass crucial signals onto cells through an entirely different phenomenon in which molecules push and pull on each other, perpetually coming together and dissociating.

While decades of research have shed light on the chemical signaling process, the particulars of mechanical signaling are still poorly understood. It is clear, for instance, that when a cell clings to the bottom of a petri dish or makes contact with neighboring cells, its interaction with its surroundings is driven by actin, which binds to so-called adhesion proteins in the cell’s outer rim.

But it remained unclear how cells pass a mechanical signal from their environment along to actin, and how actin then relays that signal to either beckon adhesion proteins or push them away.

“We’ve known about actin-binding adhesion proteins for many years,” says Lin Mei, a graduate fellow in chemical biology at Rockefeller. “But before our study, there was no research proving that stretching actin conveys a mechanical signal to proteins that can sense this mechanical force.”

A “floppy tail” receives the transmission

In collaboration with Rockefeller’s Shixin Liu, the researchers undertook the painstaking task of suspending a single actin filament, which measures about 1/15,000th the width of a human hair, between two microscopic beads that anchor each end of the filament. They then exposed the filament to an adhesion protein known as α-catenin, and used an innovative technology called laser tweezers to pull on the actin protein just enough to mimic the minute tension it might experience in a cell.

They observed that actin bound α-catenin better while they were pulling on it, implying that actin was transmitting a mechanical signal to α-catenin, and that α-catenin had the capacity to receive this signal.

But a similar adhesion protein, vinculin, proved to be signal-deaf. With the help of advanced electron microscopy techniques, the researchers homed in on the crucial difference between α-catenin and vinculin. “There was this one peptide in α-catenin protein, a floppy little tail that partially folds only when it is bound to actin directly,” Alushin says. “All other parts of the two proteins were essentially the same.”

He and his co-workers suspected that actin was relaying a perfectly good mechanical signal, but that only the floppy tail of α-catenin was prepared to receive it. Vinculin, bereft of floppy tail, was simply missing actin’s call. To test this theory, they engineered a version of vinculin with an α-catenin tail transplanted onto it—and the floppy-tailed vinculin began binding better when actin was stretched. Actin was the signal transmitter; the floppy tail, the receiver.

Alushin notes that, while α-catenin and its floppy tail may eventually become an appealing target for clinical therapies, the new findings are first and foremost a coup for the burgeoning field of mechanobiology, which studies how mechanical forces drive crucial processes at the cellular level. “We know that α-catenin is critical in brain development and frequently mutated in cancer, but most of what we know about it is that, if you get rid of it, everything else in the cell breaks,” he says. “By precisely defining the force-detector in α-catenin, we will enable researchers to figure out exactly what its function is in mechanical signaling.”

“We suspect that there are hundreds of other proteins that directly sense force transmitted by actin,” adds Mei. “Our work provides the foundation and the molecular details to begin searching for all of the other force-sensitive proteins.”