Amid the rush for COVID-19 drugs, a case for the helicase 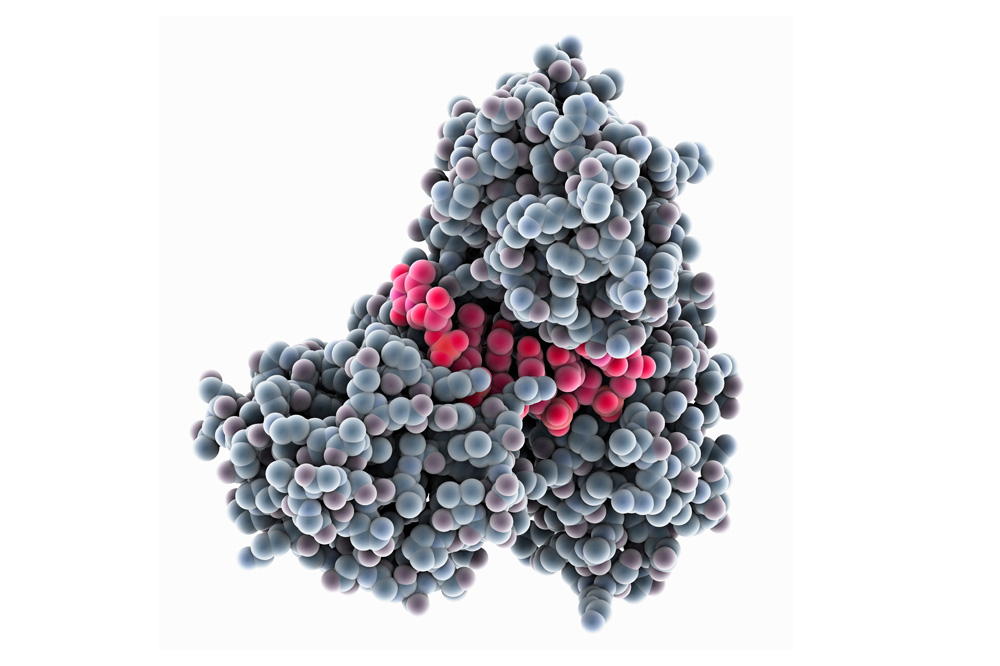 To replicate, organisms rely on helicases, such as the one shown above for hepatitis C virus. Scientists are studying a similar molecular structure in SARS-CoV-2.

Upon entry into our cells, SARS-CoV-2 immediately gets to work replicating itself. The process is nothing short of impressive: A suite of enzymes and proteins work to copy the virus’s genetic material into thousands more copies, wrapping each in proteins and lipids, and ultimately sending them bursting out of the cell like confetti from a popped balloon.

Around the world, researchers working on developing treatments for COVID-19 are intensively examining each step of this process. Among them is Rockefeller’s Pels Family Professor Tarun Kapoor, whose lab has turned its expertise on stopping propagation of cancer cells to the virus, focusing on an essential item in the virus’s replication toolbox: the helicase.

Vital to all organisms, helicases are like molecular motors that move along strands of DNA—or in the case of the coronavirus, RNA—unzipping them in preparation for copying genetic information.

“If you think of the helicase as a machine with many different parts, we are trying to find molecules that can stick to one of the parts and disrupt the machine,” Kapoor says. His study is one of nearly 20 COVID-19 projects that have been launched by Rockefeller researchers  in an effort to better understand the SARS-CoV-2 virus and speed the development of new treatments.

From cancer to COVID

Kapoor’s lab has long focused on developing drugs to inhibit the growth of cancer cells: His team discovers compounds that inhibit particular enzymes, and then refines them for development into therapeutic drugs.

At the start of the COVID-19 pandemic, the lab shifted its focus to use a similar strategy against the coronavirus. Borrowing from their expertise with certain classes of enzymes, the team set out to identify those in the virus—starting with the helicase, which Kapoor suspects might be a promising drug target.

To find the SARS-CoV-2’s version of this enzyme, called NSP13, his team looked at the genome of the virus, which became available in January. Then, by looking at the molecular makeup of the enzyme, the team searched for likely inhibitors from large libraries of chemical compounds that they and others had previously assembled.

“By looking closely at the molecular makeup of the virus’s parts, we can predict to some extent what type of compounds may work to inhibit it,” Kapoor says.

Since viruses tend to mutate and slightly change their machinery, any inhibitor that looks good today may lose its potency over time. To prevent that scenario, the team uses their computational method for cancer drug discovery, called resistance analysis during design, or RADD, which helps them predict whether a candidate inhibitor will continue to be active against a virus that has mutated.

Finally, candidate compounds will be tested for their ability to block the enzyme’s activity in the actual virus. Kapoor notes it is especially important to ensure the compounds leave our own helicases untouched. “We have to find a drug that inhibits the virus but isn’t toxic to the host cells,” he says. “Fortunately, from what we know about the SARS helicase the risk of that does not seem high.”

The process of turning these compounds into medications that can be given to humans may take many months, at which point many scientists hope a SARS-CoV-2 vaccine will be available. But the researchers believe the drugs may prove crucial with or without a vaccine—by helping treat patients who do not adequately respond to immunization, for example, and extending the range of inexpensive, widely available drugs.

Moreover, the research may help thwart the threat of future viruses early on.

“What’s truly remarkable is that the helicase in SARS-CoV-2 is 99 percent identical to the helicase in the 2003 SARS virus,” Kapoor says. “So there’s a big chance that the enzyme will look largely the same in future pandemics. And when the next SARS virus strikes, we want to have a helicase inhibitor ready and be more prepared.”