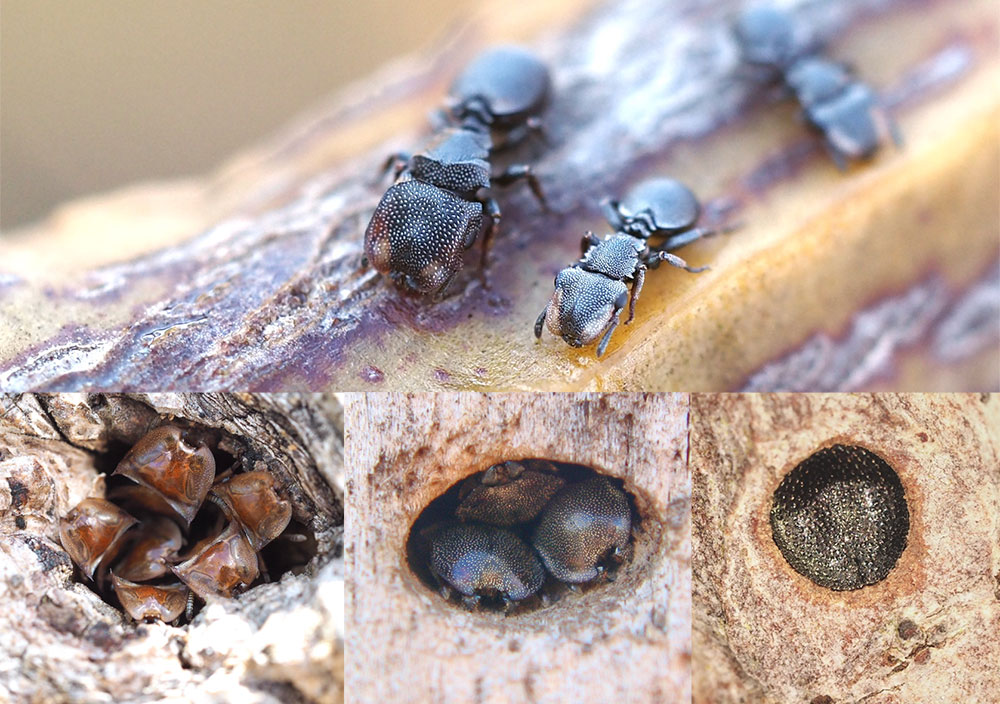 Turtle ants defend the entrance of their nests with elaborate armors: their heads.

Turtle ant soldiers look like real-life creatures straight out of a Japanese anime film. These tree-dwelling insects scuttle to and fro sporting shiny, adorably oversized heads, which they use to block the entrances of their nests—essentially acting as living doors.

Not all heads are shaped alike: some soldiers have ones that resemble manhole covers and perfectly seal tunnel entrances. Others have square heads, which they assemble into multi-member blockades reminiscent of a Spartan army’s overlapping shields. This variety in head shapes reveals more than just another of nature’s quirky oddities: it can also shine a light on how species evolve to fill ecological niches. And that evolution, new research published in the Proceedings of the National Academy of Sciences shows, is not always a one-way street toward increasing specialization. Occasionally, it can take a species back to a more-generalist stage.

“Usually, you would think that once a species is specialized, it’s stuck in that very narrow niche,” says Daniel Kronauer, head of Rockefeller’s Laboratory of Social Evolution and Behavior. “But turtle ants are an interesting case of a very dynamic evolutionary trajectory, with a lot of back and forth.”

A match made in evolution

Like many other social insects living in colonies, turtle ants specialize for different functions, often evolving exaggerated features suited to their job. For the soldiers, this process has resulted in large heads that come in a variety of shapes.

“There’s a whopping four-fold difference between the smallest and largest turtle ant soldier heads,” says Scott Powell, a biologist at George Washington University and lead author of the new study. “To help people picture this, I often say that the smallest species is able to sit comfortably on the head of the largest species.”

The shape and size of a turtle-ant soldier’s head is dictated by the type of tunnel the species in question occupies. The ants don’t dig the tunnels themselves, but move into those excavated by wood-boring beetles. And since a hand-me-down tunnel might be too big or too small, Kronauer says, the ants diversify rapidly to be able to occupy it.

The relationship between turtle-ant heads and tunnels can hence offer a uniquely clear insight into natural selection. Researchers can easily compare a trait—head circumference—with the ecological feature it’s evolved to adapt to: the nest-entrance size. As Kronauer says, “It’s a 1:1 match on the exact same scale.”

To examine the evolutionary journey of various head shapes, the researchers grouped 89 species of turtle ants based on whether soldiers sported a square, dome, disc, or dish-shaped head. They also included a group of turtle-ant species that don’t have soldiers. They then examined the evolutionary relationships among these groups using the species’ genetic information, which they had previously gathered.

If evolution was a one-way path, the first turtle ants that appeared some 45 million years ago should have lacked soldiers altogether, then gradually evolved toward specialization—starting with the generalist, square-headed soldiers, all the way to those with highly-tailored dish heads.

But the new analysis suggests that this was not the case. Instead, the oldest common ancestor the researchers could trace likely had a square head. That ancestor went on to form a range of species, from ones with no soldiers at all to others with different levels of specialization. In some cases, more specialist species reversed direction over time, evolving back into more generalist head shapes.

The finding nicely shows just how surprisingly flexible nature can be in fitting the shape of an organism to the context of the environment they occupy, Powell says.

“The space that evolution has to play with is actually quite a bit larger than previously thought,” Kronauer adds.