Embryos remember the chemicals that they encounter 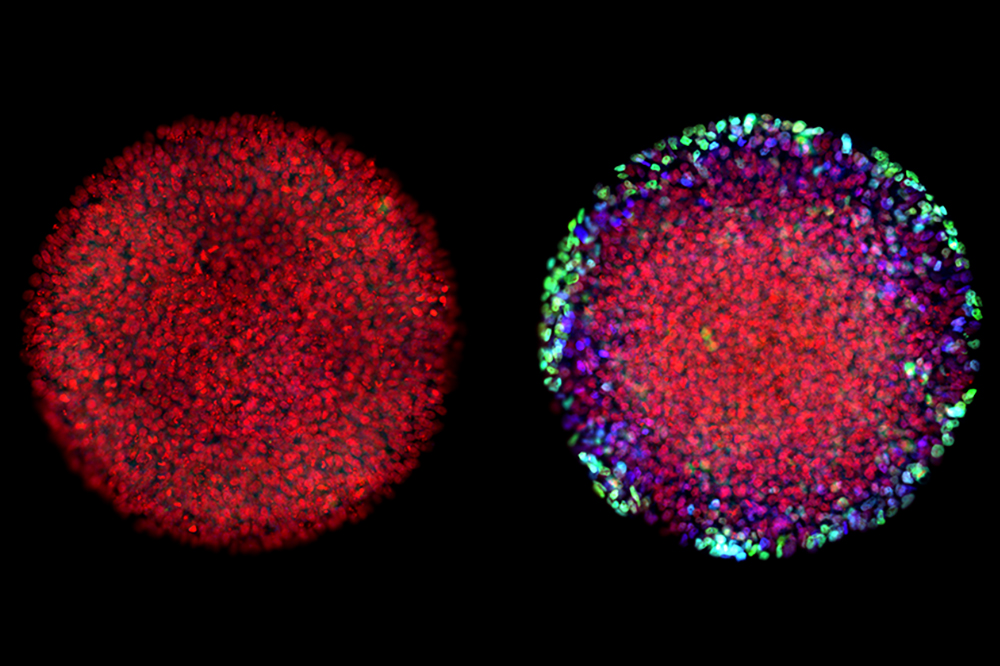 When lab-grown embryos were exposed to Activin alone, they failed to differentiate (left). Following exposure to both WNT and Activin, distinct cell types emerged (right).

We all start out as a clump of identical cells. As these cells divide and multiply, they gradually take on distinct identities, acquiring the traits necessary to form, for instance, muscle tissue, bone, or nerves. A recent study from Rockefeller scientists offers new insight into how these cellular identities are cultivated over the course of development.

According to the study, published in eLife, cells retain a memory of the chemical signals to which they are exposed. And, the researchers show, embryos that fail to form these memories remain a clump of clones, never realizing their unique biological potential.

Over 25 years ago, Ali H. Brivanlou demonstrated that the protein Activin causes embryonic frog cells to take on traits specific to certain tissue types, a process called differentiation. For decades now, Activin has been thought to instigate the transition from homogenous clump to specialized cells.

“Activin was the textbook definition of a molecule that is necessary and sufficient for differentiation,” says Brivanlou, the Robert and Harriet Heilbrunn Professor. “Researchers had shown that the dose of the protein determines cellular fate. At a very high dose, for example, you get gut and muscle; and at a very low dose, you get nerve tissue.”

Despite ample evidence from animal studies, questions remained about how Activin guides development in human cells. Working with Brivanlou and Eric D. Siggia, the Viola Ward Brinning and Elbert Calhoun Brinning Professor, graduate fellow Anna Yoney set out investigate whether the protein triggers differentiation in laboratory-generated human embryos. Developed from stem cells, these embryos mimic the behavior of human cells during the early stages of development.

The researchers expected these synthetic embryos to respond just like Brivanlou’s frogs. Yet, after applying Activin to these cells, they observed, well, nothing.

“Anna put Activin on the embryos and we waited—and waited and waited. And absolutely nothing happened! That was shocking,” says Brivanlou.

Researchers used a special imaging technique to visualize the location of every nucleus in a lab-generated embryo (left). When exposed to Activin alone, cells along the embryo’s border reacted briefly, but did not fully differentiate (right).

Undeterred, Yoney considered possible explanations for her results. “I thought, Ok, we don’t get a response from Activin alone,” she recalls. “What additional signals might we need to see differentiation?”

She ultimately homed in on WNT, a molecule known to regulate the movement of cells during development. In her next experiment, she exposed the cells to WNT before adding Activin; and, this time, they differentiated in the normal manner.

“The cells that saw WNT reacted to Activin with the full range of response—just like we see in the frog and other animals,” says Brivanlou. “But cells that hadn’t seen WNT were totally unresponsive, as if Activin wasn’t even there.”

The researchers concluded that differentiation requires both WNT and Activin signaling. Crucially, however, they showed that cells needn’t be exposed to the two chemicals simultaneously.

“We blocked WNT signaling during the Activin treatment phase and found that the cells still differentiated,” says Yoney. “So we concluded that the cells actually remembered that they had previously been exposed to WNT.”

The researchers deemed this phenomenon “signaling memory” because WNT appears to permanently change cells that cross its path. Earlier research in this area failed to uncover evidence for embryonic memories because, says Brivanlou, most developmental biologists work with animal cells.

“In animal model systems, cells encounter a series of signals before people like me manipulate them. But Anna’s artificial embryos came from stem cells that hadn’t had this kind of exposure—and this makes them perfect tools for discovering the roles of other signals,” he says. “As beautiful as the model systems are, sometimes they can lead you to miss things.”

The researchers hope to further explore how and where cellular memories are stored. Yoney suspects that they are recorded in cells’ nuclei as modifications to the epigenome, which controls the way that cells read out their DNA. Additional research in this area could have major implications for understanding development in humans and other species.

New research casts doubt on a genetic test used to screen would-be embryos for IVF implantation. The findings suggests that these embryos can develop into healthy babies regardless of whether or not they’ve been flagged as defective by the test.