New faculty member studies the architecture of the genome 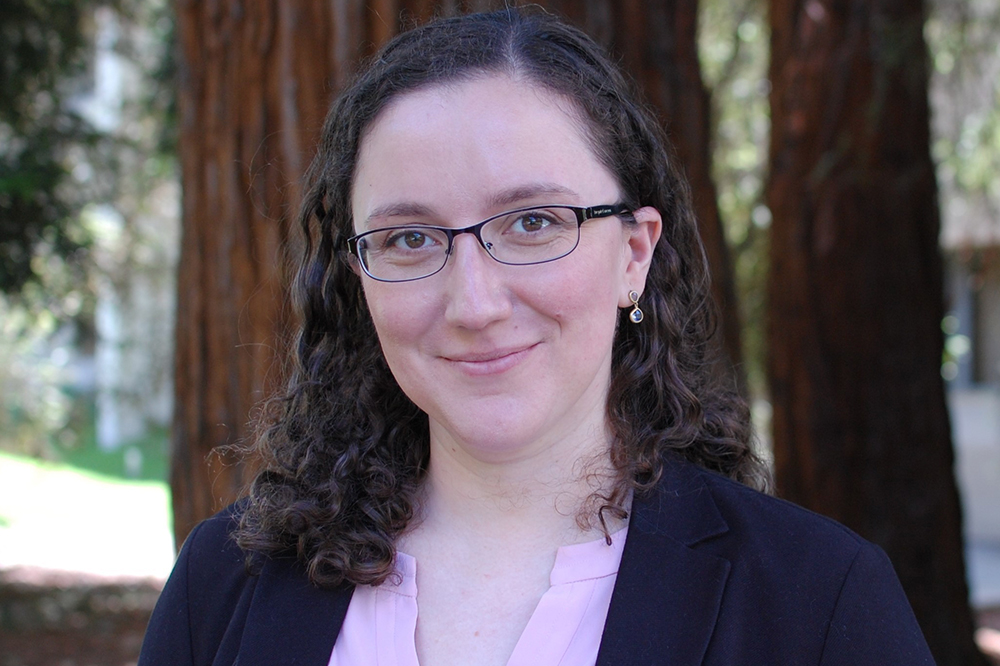 If unpacked from the 46 chromosomes that contain it, the DNA of the human genome in a single cell would stretch to roughly the height of an adult. Cells manage this immense molecular length by wrapping it into tidy coils. This organizational strategy not only neatly packs DNA, but also allows cells to precisely control the expression of the genes it contains.

New Rockefeller scientist Viviana I. Risca takes a biophysical approach to examining the detailed structures that organize and support DNA in living cells. Because these structures are critical to providing access to specific genes, the work has implications for better understanding the control of gene expression—the process by which individual genes are activated and deactivated. Currently a postdoc at the Stanford University School of Medicine, she will become a tenure-track assistant professor and head of the new Laboratory of Genome Architecture and Dynamics on January 2, 2019.

Scientists have a fairly good one-dimensional map of the genome but have only recently begun to uncover how chromosomes fold into three-dimensional structures that fine-tune DNA-based processes, she says.

“I am interested in the basic biophysical rules that govern the self-organization of the genome, and how this architecture contributes to cells’ ability to maintain a stable state or dynamically differentiate into the hundreds of distinct cell types that make up the human body,” Risca says.

This architecture matters because, in order to become active, DNA must be available to the molecular machinery that reads the protein-making instructions it contains. Mutations and other disturbances that affect these interactions between DNA and the molecules that read it out can have serious consequences, leading to developmental disorders or cancer.

A few at a time

Risca has a long-standing interest in how complex structures emerge from physical forces and molecular interactions. As a graduate student, she studied how such forces influence the branching of actin filaments, which are part of a cell’s skeleton. Drawn by the structural similarities of DNA, another semi-flexible, self-organizing molecule, she shifted the focus of her research to the spatial organization that turns the genome into a compact, dynamic structure that fits inside the cell.

The packing begins when DNA loops around a core of scaffolding proteins to form a nucleosome. In turn, nucleosomes are strung together into a fiber called chromatin that can adopt a variety of complex structures, depending on whether a gene is active or inactive, and whether the cell is growing or dividing. Scientists have techniques to look at the structure of individual nucleosomes, as well as those formed by tens to hundreds of them. But a clear picture of how individual nucleosomes fit together with their immediate neighbors has been lacking.

As a postdoc in Will Greenleaf’s Stanford lab, Risca and her colleagues developed a technique that can map, at high resolution, how DNA is folded around up to three nucleosomes at a time—something that wasn’t previously possible. Her approach, called RICC-seq, uses radiation to cut a DNA molecule in a way that reveals how it loops around to touch back on itself when it is folded into chromatin.

Using RICC-seq, Risca’s work filled in new details about two general states in which chromosome segments are believed to exist: a loose, open state that allows for the sequence to be read, and a compressed state in which inactive genes are stored. She showed that nucleosomes in a compressed state are kept in a tight zigzag arrangement.

“As a biophysicist, Viviana incorporates biological interests, rigorous quantitative thinking, and molecular modeling to understand the structural dynamics of the genome, a component of heredity that has historically been poorly understood,” says Richard P. Lifton, Rockefeller’s president. “With a clear vision of how to study these phenomena, there is no doubt she will be successful at Rockefeller.”

The structure of silence

In her new lab, Risca will study the structural changes that occur when cells switch off genes. She’ll focus on two scenarios: X chromosome inactivation, in which duplicate genes within a female cell’s extra X chromosome are inactivated, and senescence, which occurs when cells stop dividing in response to DNA damage or the activation of genes that can cause cancer.

“Senescence is one of the first lines of defense against cancer,” Risca says. “I want to understand how the organization of nucleosomes contributes to it.” Her work may also help explain the effects of cancer drugs on nucleosome architecture, potentially leading to improved treatments.

“The idea of self-organization and the relationship between structure and function fascinate me,” Risca says. “Working with DNA gives me a way to study them in a context that has important implications for human health.”