Common wisdom suggests that two heads are better than one. Yet, two heads can also butt—and when resources are scarce, competition may seem more attractive than collaboration. With that in mind, biologists have long wondered how civil societies evolve.

“You would think, if you pair similar individuals from a single species, their function would be redundant. If anything, there should be competition between individuals,” says Daniel Kronauer, the Stanley S. and Sydney R. Shuman Associate Professor. However, in a recent study published in Nature, Kronauer shows that group living confers immediate benefits, even among genetically identical individuals.

Over a 45-day period, Kronauer’s team monitored clonal raider ants (Ooceraea biroi) in groups ranging in size from 1 to 16 individuals. They observed that larger groups produced more offspring and experienced greater stability than smaller groups. The bigger groups also exhibited a greater division of labor: even though the ants were extremely similar, group living somehow prompted the insects to specialize in particular tasks. 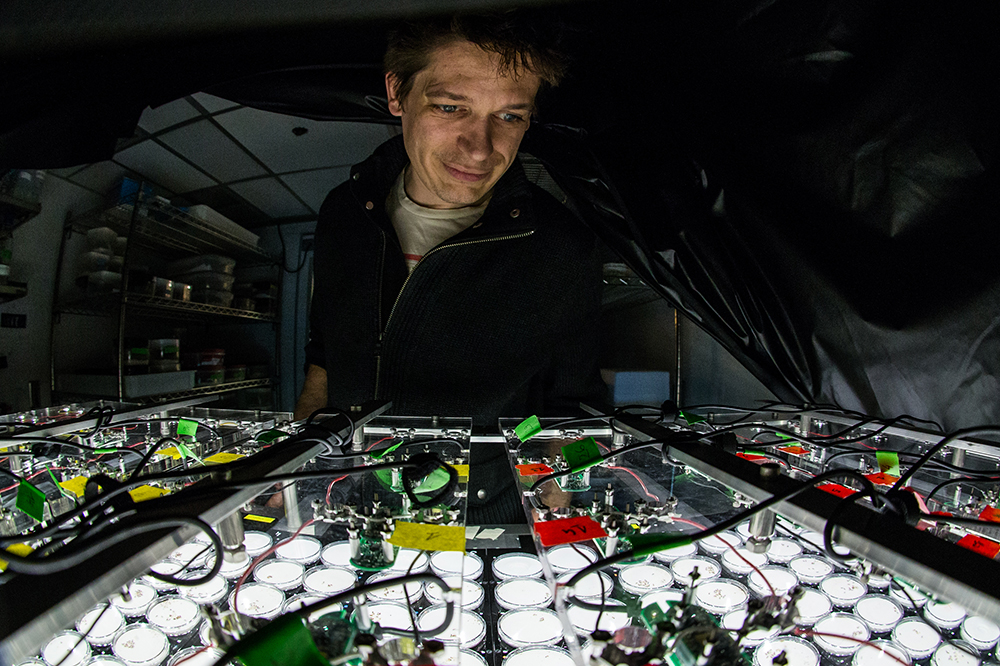 Kronauer observes his many ants via a novel tracking setup, used for the first time in this study. (Photo by Alex Wild)

Specialization isn’t the only advantage of living in a group, however. In developing a mathematical model, the researchers were able to determine, among other things, that increased group size led to increased stability, regardless of whether the ants divided their responsibilities. “You don’t need specialization to see an effect, but with specialization the effect becomes stronger,” says Kronauer.

Results from both the ant observations and the model indicate that individuals benefit from group living even when those groups are quite small—a finding that has significant implications for understanding the evolution of social behavior.

“It’s easy to see how individuals work together in more complex societies, such as ant colonies with queens and workers, because they have distinct roles. But that’s not how insect societies started out,” says Kronauer. “This research shows that very simple societies can have an evolutionary advantage over individuals living by themselves—which provides a stepping stone to understanding how complex societies evolved from solitary animals.”

By increasing the size of ant colonies bit by bit, scientists identified the mechanism responsible for the evolution of mass raiding behavior.

Turtle ant soldiers and their oddly-shaped heads suggest that evolution is not always a one-way street toward increasing specialization.

A new study in ants identifies a peptide that plays an important role in regulating reproduction. This research illuminates a potential trajectory for the evolution of distinct social castes—workers and queens.