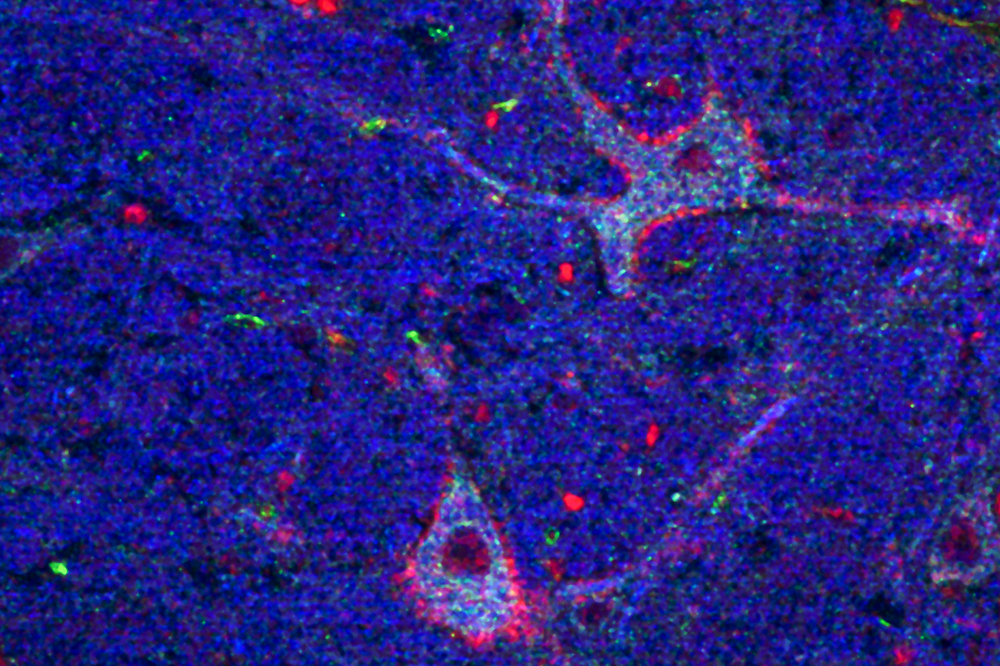 There is no shortage of wonders that our central nervous system produces—from thought and language to movement to the five senses. All of those dazzling traits, however, depend on an underappreciated deep brain mechanism that Donald Pfaff, head of the Laboratory of Neurobiology and Behavior at The Rockefeller University, calls generalized arousal, or GA for short. GA is what wakes us up in the morning and keeps us aware and in touch with ourselves and our environment throughout our conscious hours.

“It’s so fundamental that we don’t pay attention to it,” says Pfaff,  “and yet it’s so important that we should.”

Pfaff and his team of researchers certainly do. Now, in a series of experiments involving a particular type of brain cell, they have advanced our understanding of the roots of consciousness. Their work may potentially prove relevant in the study of some psychiatric diseases.

The big cells in the black box

The findings, published this month in Proceedings of the National Academy of Sciences, shed light on an area of the brainstem that is so little understood the first author of the paper, Inna Tabansky, a research associate in Pfaff’s lab, calls it “the black box.” That term is certainly simpler than its actual name—the nucleus gigantocellularis (NGC), which is part of a structure called the medullary reticular formation.

In her work, using mice, Tabansky focused on a subtype of extremely large neurons in the NGC with links to virtually the entire nervous system, including the thalamus, where neurons can activate the entire cerebral cortex. “If you just look at the morphology of NGC neurons, you know they’re important,” Pfaff says. “It’s just a question of what they’re important for. I think they’re essential for the initiation of any behavior.”

To discover what role the NGC neurons might play in GA, Tabansky and her colleagues, including Joel Stern, a visiting professor in the Pfaff lab, began by identifying the genes that these neurons express. They used a technique known as “retro-TRAP,” developed in the lab of Rockefeller scientist Jeffrey Friedman.

To Tabansky’s surprise, the NGC neurons were found to express the gene for an enzyme, endothelial nitric oxide synthase (eNOS), which produces nitric oxide, which in turn relaxes blood vessels, increasing the flow of oxygenated blood to tissue. (No other neurons in the brain are known to produce eNOS.) They also discovered that the eNOS-expressing NGC neurons are located close to blood vessels.

In Pfaff’s view, the neurons are so critical for the normal functions of the central nervous system that they have evolved the ability to control their own blood supply directly. ‘“We’re pretty sure that if these neurons need more oxygen and glucose, they will release nitric oxide into these nearby blood vessels in order to get it,” he says.

The circumstances that would prompt such a response were the subject of further experiments. The scientists found evidence that changes in the environment, such as the introduction of novel scents, activated  eNOS in the NGC neurons and produced increased amounts of nitric oxide in mice.

“There is some low level of production when the animal is in a familiar setting,” says Tabansky, “which is what you expect as they maintain arousal. But it is vastly increased when the animal is adapting to a new environment.” This activation of the NGC neurons supports the case for their central role in arousal, Tabansky says.

From cells to psychiatry

Going forward, Tabansky says she’s interested in exploring if their findings might help fill a gap in the understanding of certain disorders, such as bipolar disorder, suicidality, and ADHD. Some genetic research has implicated a role for the neurons she studied in these diseases,  but the mechanism behind this link is not known.

“By showing that this gene and its associated pathways have a particular role, at least in the rodent brain, that relates to a fundamental function of the nervous system, is a hint about how this gene can cause psychiatric disease,” she says. “It’s very preliminary, and there is a lot more work to be done, but it potentially opens a new way to study how this gene can alter an individual’s psychology.”

Helper T cells may play a dual role in the immune system, both encouraging and suppressing the process by which B cells mature.