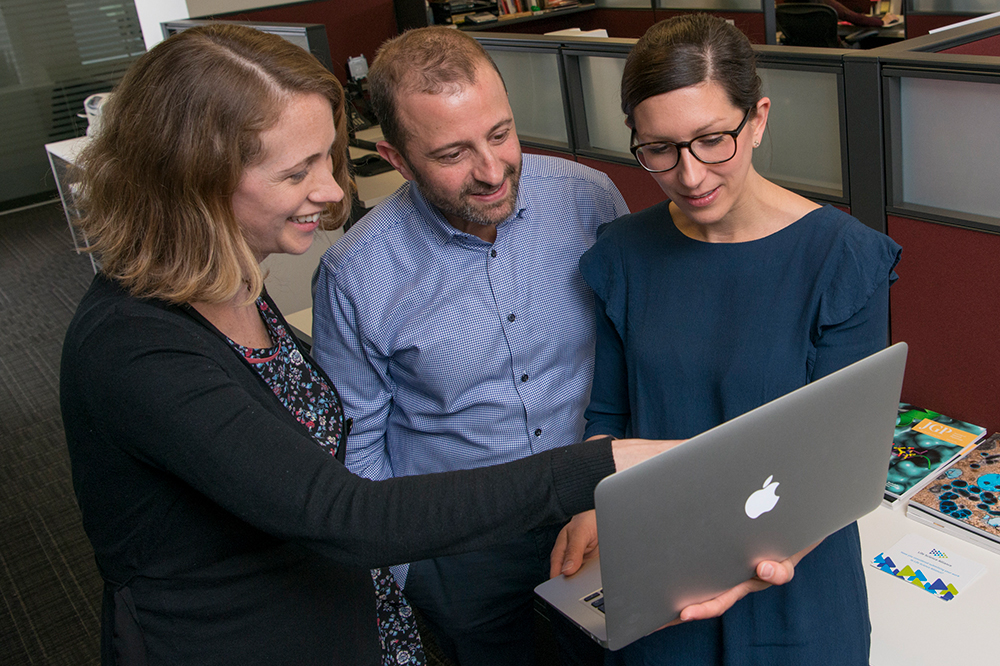 Science is advancing faster than ever, and scientific publishing strives to keep up. As researchers generate more and more data, and increasingly collaborate across disciplines, they need more options of where and how to publicize their discoveries.

With this in mind, the Rockefeller University Press recently teamed up with two other nonprofit partners, EMBO Press and Cold Spring Harbor Laboratory Press, to launch Life Science Alliance (LSA), an open-access, peer-reviewed journal covering all areas of the life sciences. The journal’s executive editor Andrea Leibfried believes it will help cut the time scientists spend on submitting and resubmitting manuscripts for publication.

“Our goal is to reduce the overall burden on both authors and reviewers without compromising scientific standards,” Leibfried said during a visit to Rockefeller University Press in April.

A former editor at The EMBO Journal, Leibfried embarked on her academic publishing career after several years of active research in Germany, France, and the United States. She earned her PhD in biology from the Pierre and Marie Curie University and the Curie Institute. Leibfried remains stationed at the EMBO headquarters in Heidelberg, Germany, where she currently oversees the editorial review of LSA submissions for the three partners.

As part of its effort to make the publishing process easier, the journal has streamlined the traditional manuscript submission and review process. Authors can submit papers to LSA directly or by transfer from nine other journals published by the three partner institutions. If a paper does not meet a partner journal’s criteria but seems like an appropriate fit for LSA, editors at the two journals will work together to enable a potential transfer. (Read more about submissions and transfers.)

Scientists are encouraged to submit articles from preprint servers, a routine that allows them to disseminate their research findings before peer review. Along the same lines, LSA offers scooping protection; they will never reject an article that’s in review or in production because similar results are being published by another research team.

“We don’t want people to jump through hoops,” says Susan King, executive director of the Rockefeller University Press. “If a paper goes through peer review, and it’s good, solid science, it deserves to be published.”

Critically, the referees and editors assessing LSA submissions are all academic leaders. King explains that journals must ensure the highest standard of scientific rigor in their evaluation process since scientific papers are often an important metric against which academic careers are judged. “Just as academics are involved in deciding who will get a grant, or who will get tenure, it is essential that they be involved in editorial decision making,” she says.

Rockefeller’s commitment to improve scientific publishing dates back to the university’s earliest days. In 1905, Simon Flexner, the university’s first director, took over the Journal of Experimental Medicine from William Welch, who had founded it at the Johns Hopkins School of Medicine in 1896. The Journal of General Physiology was founded in 1918, followed by the Journal of Cell Biology in 1955—making LSA the first journal added to the Rockefeller University Press catalog in over 60 years.

LSA’s academic editors are Julia Cooper of the U.S. National Cancer Institute, Florent Ginhoux of the Singapore Immunology Network at A*STAR, Sebastian Jessberger of the Brain Research Institute at University of Zurich, and Michael Overholtzer of the Cell Biology Program at Memorial Sloan Kettering Cancer Center. The journal also has an advisory editorial board consisting of over 100 academics, including Rockefeller University’s Howard C. Hang, the Richard E. Salomon Family Associate Professor.