Scientists solve the case of the missing subplate, with wide implications for brain science 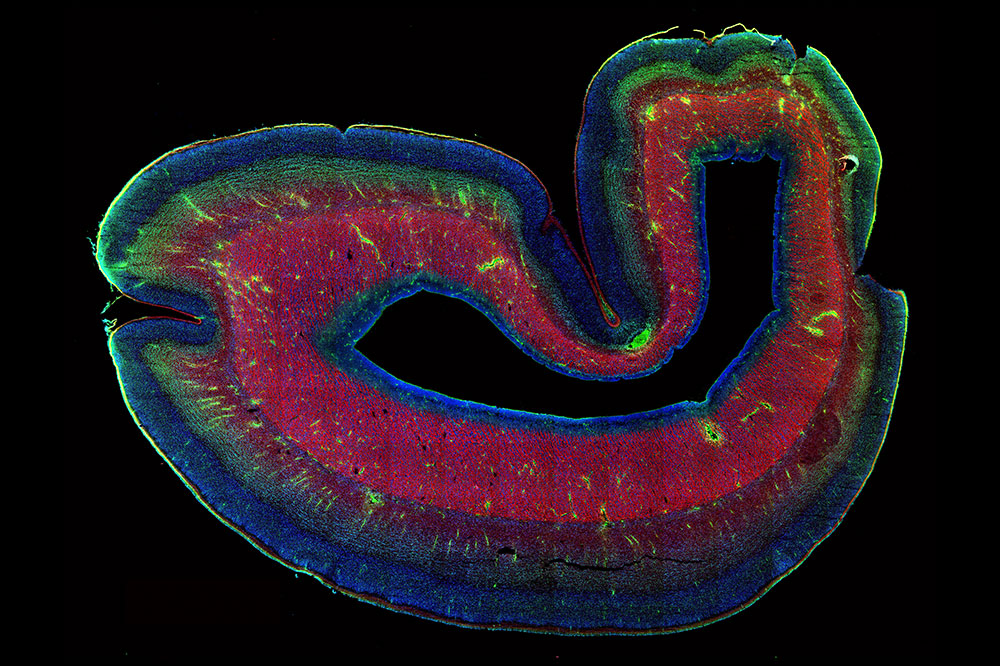 The subplate (green) sits directly below the developing cortex, the outermost layer of the brain, but is curiously absent in the adult brain.

The disappearance of an entire brain region should be cause for concern. Yet, for decades scientists have calmly maintained that one brain area, the subplate, simply vanishes during the course of human development. Recently, however, research has revealed genetic similarities between cells in the subplate and neurons implicated in autism—leading a team of Rockefeller scientists to wonder: what if subplate cells don’t actually vanish at all?

In a new paper, which appears in Cell Stem Cell, Ali H. Brivanlou, the Robert and Harriet Heilbrunn Professor, and postdoctoral associate Zeeshan Ozair demonstrate that subplate neurons survive, and in fact become part of the adult cerebral cortex, a brain area involved in complex cognitive functions. The team outlines a connection between subplate neurons and certain brain disorders, and further identifies a strategy for treating such disorders via innovative stem cell techniques.

In the developing brain, the subplate sits below the cortical plate, a precursor to the cortex. During some stages of development, the subplate is the largest layer of the brain—making its ultimate disappearance all the more confounding.

He and his colleagues found ample support for this idea. In samples of brain tissue from various developmental stages, they detected PRDM8, a protein expressed in migrating neurons that helps cells move into the cortical plate. They also detected PRDM8 in subplate-like neurons that they generated from stem cells; and experiments showed that these laboratory-grown subplate neurons wandered away from their original location. All of these findings pointed not to cell death, but to cell movement.

This movie, captured over 17 hours, shows subplate neurons migrating away from their original position—a clue that these cells don’t die, but rather relocate.

Far from a site of demise, the subplate seems to nurture the development of functional and diverse cells. Ozair and Brivanlou observed that subplate neurons mature into various types of deep projection neurons—cells found in the deepest layers of the cortex.

In other experiments, the researchers modulated the levels of WNT signaling, a pathway known to guide many developmental processes. They found that the level of WNT signaling determined the fate of subplate neurons: low levels yielded projection neurons that extend within the cortex, and high levels yielded neurons that project to other brain areas.

These findings have significant implications for understanding brain disorders. Projection neuron abnormalities have been linked to several neurodevelopmental conditions, including autism; and Brivanlou and Ozair’s research suggests that these abnormalities manifest very early in development. “A lot of the genes associated with autism are first expressed in the subplate,” says Ozair. “And if subplate neurons don’t die but instead become part of the cortex, they will carry those mutations with them.”

In addition to shedding light on the early stages of brain disorders, the research presents new hope for preventing or treating such disorders through stem-cell therapy. For example, the scientists hope that their findings will one day make it possible to treat neurodegenerative disease using techniques to generate scarce neuronal subtypes from subplate-like stem cells.

“The deep layers of the cortex are involved in many diseases; Alzheimer’s, Lou Gehrig’s, and Huntington’s disease all kill off specific types of deep-projection neurons,” says Ozair. “When we think about cellular-replacement therapy, we need to think about how these cells are made in the first place.”

Brivanlou adds: “This research shows us how to generate these neurons directly, because we know the signaling mechanism that is necessary for their fate to be unveiled.”

For the first time, scientists have shown that a small cluster of cells in the human embryo dictates the fate of other embryonic cells. The discovery of this developmental “organizer” could advance research into many human diseases, and it suggests we have more in common with birds than meets the eye.

The symptoms of Huntington’s typically appear in middle age, but the disease may in fact originate much earlier. New research shows that a patient’s neural abnormalities may arise already during embryonic development—suggesting that treating the disease early may be beneficial.

A revolutionary method developed by Rockefeller University scientists that allows researchers to study human embryo development in the lab has been voted Breakthrough of the Year by Science magazine readers. The technique, pioneered by Ali Brivanlou, Robert and Harriet Heilbrunn Professor of the Laboratory of Stem Cell Biology and Molecular…...