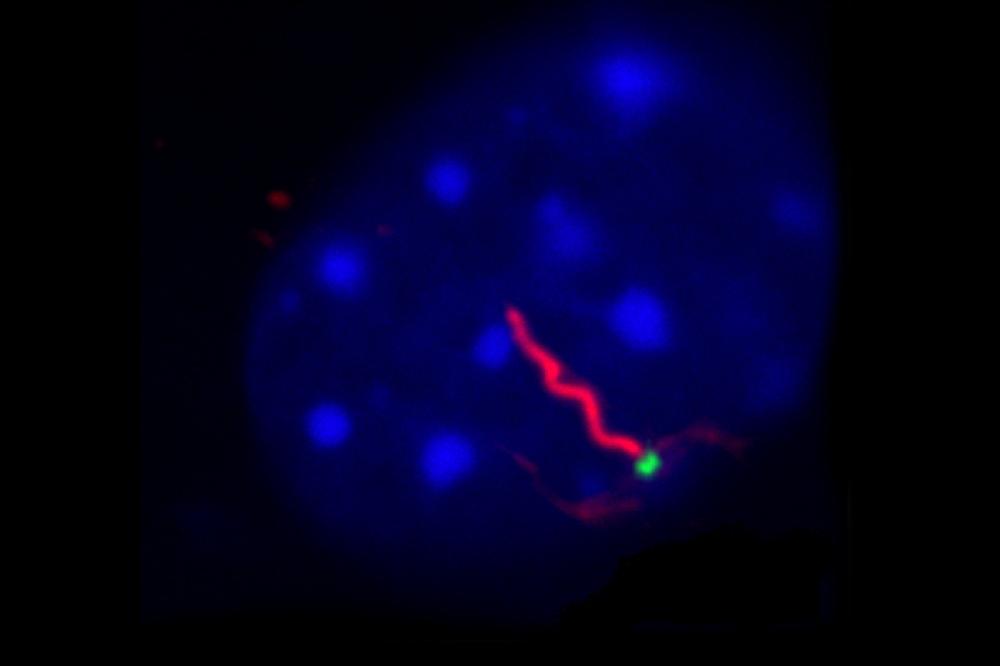 By inhibiting the transport of proteins that appear in red and green in the micrometer-sized, antenna-like cellular structure called cilia, researchers hope to stop cancer cells in their tracks.

A chemical inhibitor targeting basal cell carcinoma, which originated in Tarun Kapoor’s laboratory, has been selected as the first project to enter the Bridge Medicines pipeline for development as a novel drug. The project, which holds the promise of eliminating certain types of skin cancers without surgery, was previously advanced in the Tri-Institutional Therapeutics Discovery Institute (Tri-I TDI).

Bridge Medicines is a newly formed drug discovery company devoted to moving projects that “graduate” from Tri-I TDI into the next phase of development. The company was formed in 2017 by Rockefeller and its Tri-Institutional partners, Weill Cornell Medicine, and Memorial Sloan Kettering Cancer Center, along with Takeda Pharmaceutical Company and two venture capital firms, Deerfield Management and Bay City Capital. Projects that are accepted into Bridge Medicines receive support and guidance to bring them from proof-of-concept studies to clinical trials.

The project is based on Kapoor’s effort to understand molecular motors that power intracellular transport functions. Kapoor, in collaboration with Dr. James Chen at Stanford, has developed chemicals that block certain intracellular transport processes needed for the growth of specific cell types. Through a collaboration among scientists in Kapoor’s laboratory, Tri-I TDI, and Bridge Medicines, this work has resulted in a potential topical skin treatment for basal cell carcinoma, the most common type of skin cancer.

“This is an exciting next step for the basal cell carcinoma program,” says Kapoor, who is the Pels Family Professor and head of the Lawrence Ruben Laboratory of Chemistry and Cell Biology. “We have an action plan, funding, and operational support to move forward.”

Scientists still have a lot to learn about the processes that trigger cell division, partly because they happen so quickly. A new chemical probe will make it possible to capture the workings of one of the key players.

Enzyme structure helps to explain how protein factories are constructed

Researchers characterized the structure of Mdn1, an enzyme key to making ribosomes.