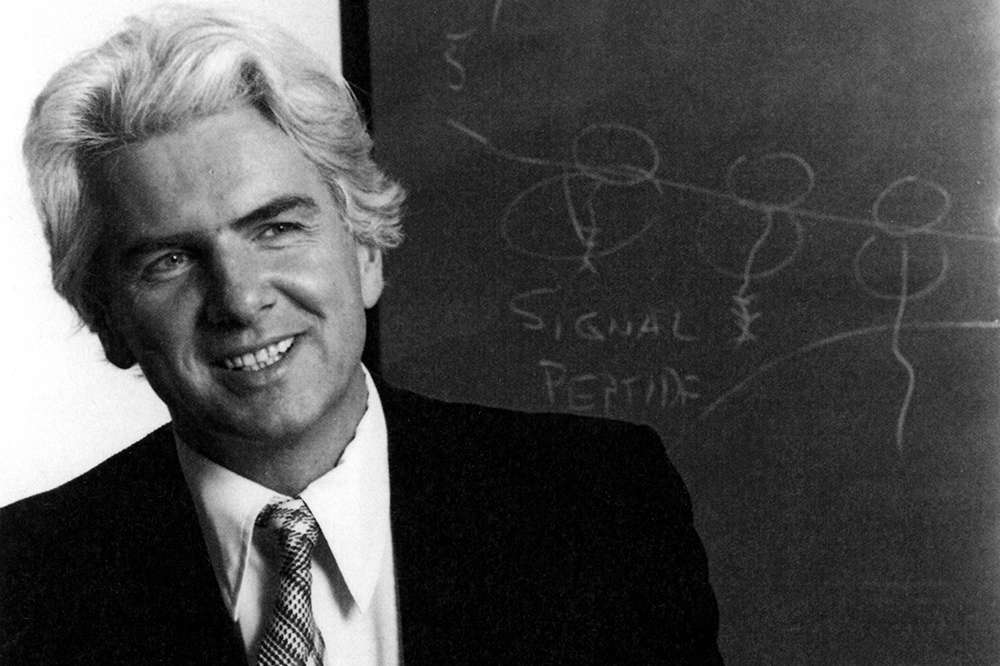 Günter Blobel, a Nobel Prize-winning Rockefeller biologist who discovered the mechanisms by which proteins are targeted for delivery to specific locations within cells, died February 18 at 81. Blobel joined the Rockefeller faculty 51 years ago; he was the John D. Rockefeller Jr. Professor and had been a Howard Hughes Medical Institute Investigator since 1986.

Proteins that are manufactured within cells must be transported to the sites where they are needed. Blobel discovered a system of intrinsic signals that explain how cells are able to accurately distribute billions of such proteins within a cell each day. Along with his colleagues, Blobel learned that sequences in proteins were responsible for directing traffic, matching up these “zip codes” with transport machinery in the cell that facilitate targeting to the proper cellular membranes. This connection results in the proteins either passing through the membranes or becoming embedded within them.

His observations were central to uniting the fields of molecular biology, which deals primarily with proteins and nucleic acids, and cell biology, which is focused on the structures inside cells, called organelles. In addition, he found that the same system plays a role across all eukaryotes, ranging from yeast to humans.

“Günter was a towering figure in the scientific community who made fundamental contributions to our understanding of the most basic processes that underlie life on our planet,” says Richard P. Lifton, the Rockefeller president. “His work revolutionized cell biology, demonstrating that seemingly impenetrable problems could be understood in molecular detail.”

“Generations of scientists have built upon his seminal findings, with impact on the understanding of a wide range of human diseases as well as for the industrial production of proteins, including many life-saving drugs such as insulin and therapeutic antibodies,” adds Michael Young, Rockefeller professor and recipient of the 2017 Nobel Prize in Medicine.

“His loss will be felt deeply at Rockefeller and throughout the scientific community, where he was revered for his passion for science, personal generosity and inspired leadership,” Lifton says.

“Blobel developed hypotheses to explain how proteins are targeted to different internal compartments or to be secreted, how proteins that span the membrane achieve their proper topology, or how molecules are transported in and out of the nucleus,” says Sandy Simon, a Rockefeller colleague who once trained with Blobel. “But his legacy is his ability to articulate these concepts in ways that can be experimentally tested. He spent years in the cold-room trying to establish a system for testing his ideas on protein targeting and later embraced techniques from yeast genetics, electrophysiology, and structural biology for the same reason.”

Blobel was born in Waltersdorf, Germany (now part of Poland), in 1936. In early 1945, fleeing the advancing Russian army, his family went to live with relatives near Dresden, where they witnessed the firebombing of the city by the Allies. After the war, they settled in Freiberg, in what had become East Germany. Blobel received his M.D. from the University of Tübingen in 1960 and, after internships at a number of small hospitals in Germany, a Ph.D. from the University of Wisconsin, Madison, in 1967. He was a postdoctoral fellow at Rockefeller for two years before becoming a member of the faculty.

Beyond his scientific work, Blobel was well known for supporting the rebuilding of Dresden. Following the reunification of Germany, he founded U.S.-based group Friends of Dresden in 1995 to support the reconstruction, restoration, and preservation of the city’s artistic and architectural legacy. In memory of his sister Ruth, who was killed in an air raid during the war, Blobel donated almost the entirety of his Nobel prize money for the rebuilding of the Dresden Frauenkirche, a baroque Lutheran church, as well as the building of a new synagogue.

In addition to the Nobel Prize, he received numerous other awards, including the Warburg Medal from the German Society for Biochemistry and Molecular Biology (1983), the E.B. Wilson Medal from the American Society for Cell Biology (1986), the Louisa Gross Horwitz Prize (1989), the Albert Lasker Basic Medical Research Award (1993), and the New York City Mayor’s Award for Excellence in Science and Technology (1997). Blobel was a member of the National Academy of Sciences, the American Academy of Arts and Sciences, the American Philosophical Society, the National Academy of Medicine, the Pontifical Academy of Sciences, and the German Order of Merit.

For more on Blobel’s life and research, in his own words, watch this video, part of the Rockefeller oral history project.