Shooting the messenger: how one protein allows germ cells to develop 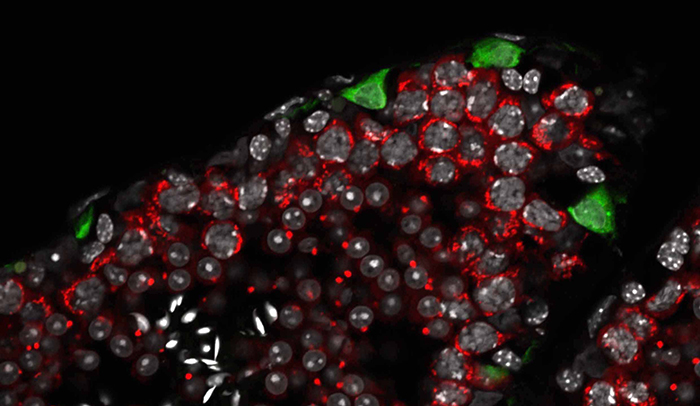 Before stem cells (green) give rise to eggs and sperm, they make DND1, a molecule that helps prevent the cells from being eliminated.

The first days of an embryo’s development are a busy time for the molecules that regulate gene expression. A vast number of specific genes need to be turned on and off at precisely the right time for cells to end up in the proper place and in the appropriate quantity.

Researchers at the Rockefeller University have untangled how a molecule called DND1 enables the proper formation of eggs and sperm—essential parts of any species that reproduces sexually. Published in Nature, the findings suggest that a pool of stem cells, which will ultimately give rise to eggs and sperm, can only survive if DND1 is around. The protein prevents a host of factors related to cell death and inflammation from killing these stem cells off.

“We already knew that mutations in the DND1 gene can cause a substantial loss of germline stem cells and male sterility—and now we know why,” says Thomas Tuschl, head of the Laboratory of RNA Molecular Biology and Howard Hughes Medical Institute Investigator. Tuschl led the study with Markus Hafner, a former postdoctoral fellow in the Tuschl lab who is now at the National Institutes of Health, and research associate Masashi Yamaji.

For a gene to be expressed, it must be copied from DNA to so-called messenger RNA (mRNA), which brings it outside of the nucleus. The mRNA then recruits the necessary building blocks to make a protein. There are many places along a gene’s journey to becoming a protein where regulators can step in to either ramp up or tone down the resulting level of protein in a cell. DND1 is one of these regulators, and scientists used to think its function is to increase the stability of mRNA.

However, Tuschl and colleagues found that it does just the opposite: DND1 binds to sites made up of a specific code on mRNA, and attracts a complex responsible for destabilizing the targeted mRNAs, thereby halting further protein production. That code can be repeated throughout an mRNA sequence, and the researchers found that more repeats of this code meant more of a chance that the mRNA would be eliminated.

The researchers also identified all of the mRNAs that DND1 targets, which included genes related to inflammation, differentiation, and cell death—genes whose activity is supposed to be turned off at this point in development. When a cell shuts down these genes, it stops producing their mRNAs. However, mRNAs that were copied earlier may still be floating around, ready to build a protein.

“We think that DND1 helps to sharpen the transition from one developmental stage to the next by targeting mRNAs that should have already been turned off, and clearing them from the cell,” says Yamaji. “By halting the production of proteins that otherwise promote cell death, DND1 allows germline stem cells to grow and be maintained in proper numbers.”