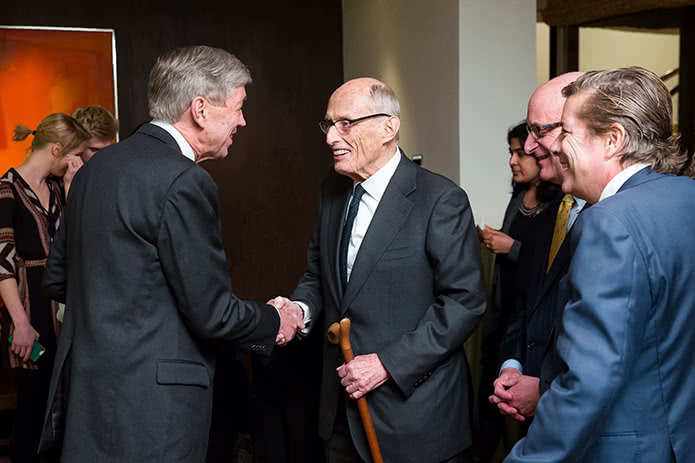 President Rick Lifton and Paul Greengard along with Barry Sloane and Kent Karosen of The Fisher Center Foundation at a reception held last December to celebrate the creation of the Paul Greengard Professorship.

Late last year, guests at the President’s House raised a glass in celebration of one of Rockefeller’s most beloved colleagues. In his nearly 35 years at Rockefeller, Paul Greengard has led pioneering studies that have transformed our understanding of how the nervous system works, and have paved the way to the development of treatments for conditions as varied as Alzheimer’s disease and depression. And at 91, the Nobel laureate continues to make discoveries and inspire those around him. But the reception wasn’t just a tribute to his remarkable life in the laboratory, it was also to celebrate the creation of the Paul Greengard Professorship, a named chair that will honor Dr. Greengard in perpetuity.

Established with a $5 million gift from The Fisher Center for Alzheimer’s Research Foundation, the Greengard Professorship will be awarded to a Rockefeller faculty member upon Dr. Greengard’s retirement.

Rockefeller’s Zachary and Elizabeth M. Fisher Center for Alzheimer’s Disease Research, which the Fisher Center helps to support, grew out of a friendship between Dr. Greengard, David Rockefeller, the university’s honorary chairman and life trustee, and the late philanthropist Zachary Fisher. Mr. Fisher’s wife, Elizabeth, had been diagnosed with Alzheimer’s disease, and he wished to help pursue a cure for the disease. Mr. Fisher and Mr. Rockefeller joined forces to create the center and designate Dr. Greengard as its director. Led by Dr. Greengard since its inception, the Fisher Center has worked to better understand the biology of Alzheimer’s disease and to eventually develop a cure. The nonprofit Fisher Center Foundation was established after Mr. Fisher’s death in 1999.

“The Fisher Center Foundation has provided Paul with tremendous support for his Alzheimer’s research year after year,” says President Richard P. Lifton. “Paul’s long relationship with the foundation represents an extraordinary scientific partnership, and we are delighted by the creation of this named chair in his honor.”

“We at the Fisher Center are so grateful to be a part of this extraordinary community, and to be graced by Paul’s leadership for such a long period of time. The Greengard Professorship is an acknowledgement of Paul’s science and humanity,” says Barry Sloane, the Fisher Center Foundation’s chairman and treasurer. He and Kent Karosen, the foundation’s president and CEO, have close ties to the university and attended the December event.

Dr. Greengard, who is Vincent Astor Professor and head of the Laboratory of Molecular and Cellular Neuroscience, studies the molecular machinery by which nerve cells communicate. His lab has shown that errors in the biochemical steps that underlie this communication play a role in various neurological disorders. In 2000, he shared the Nobel Prize in Physiology or Medicine for his discovery of how dopamine and several other neurotransmitters exert their action in the nervous system, work that has led to insights in treatments for Parkinson’s disease, schizophrenia, depression, and attention deficit hyperactivity disorder.

In addition to helping to fund Dr. Greengard’s studies, the Fisher Center Foundation runs an Alzheimer’s advocacy program and website, and provides resources for caregivers. The foundation also works to raise public awareness of the disease. Last year, it published Why Can’t Grandma Remember My Name? The book, which explains Alzheimer’s to children, was co-written by Mr. Karosen, with introductions by Paul Greengard and his wife, renowned sculptor Ursula von Rydingsvard.

“I am deeply honored by the creation of this professorship,” says Dr. Greengard. “I owe the Fisher Center Foundation a debt of gratitude for their wonderful generosity and long-standing support of our work on Alzheimer’s disease.”

Dr. Paul Greengard is a Vincent Astor Professor and head of the Laboratory of Molecular and Cellular Neuroscience.