Gregory M. Alushin, assistant professor and head of the Laboratory of Structural Biophysics and Mechanobiology, has been chosen by President Obama as one of 102 researchers to receive the Presidential Early Career Award for Scientists and Engineers, the highest honor given by the U.S. government to science and engineering professionals in the early stages of their careers. 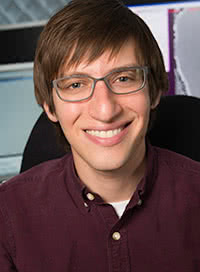 Alushin, who recently joined Rockefeller as assistant professor, studies how cells use their structural filaments to sense and respond to mechanical forces that originate externally from the environment or internally from cellular machinery. Using cryo-electron microscopy along with biochemical and biophysical approaches, his lab aims to understand how changes to actin—a predominant class of protein filaments—are linked to alterations in gene expression in development and disease.

Alushin received his B.A. in 2006 from Columbia University and his Ph.D. in 2012 from the University of California, Berkeley. Before coming to Rockefeller, he was a postdoc and then an Early Independent Scientist at the National Heart, Lung, and Blood Institute. In addition to the NIH Director’s Early Independence Award, he has received the Norton B. Gilula Award from the American Society for Cell Biology and the Harold M. Weintraub Graduate Student Award. He was also named one of Forbes’s “30 Under 30 in Science and Healthcare” in 2014.

Established by President Clinton in 1996, the Presidential Early Career Award recognizes scientists and engineers for their pursuit of innovative research and for their commitment to community service as demonstrated through scientific leadership, public education, or community outreach. Recipients are nominated by the government departments and agencies through which they are funded or employed, including the Department of Health and Human Services and the National Science Foundation. Previous Rockefeller recipients of the award are Ali H. Brivanlou in 1996, Michael P. Rout in 2001, Leslie B. Vosshall in 2002, and Gaby Maimon in 2012.