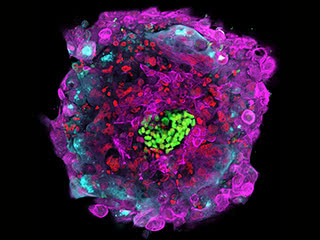 First molecular glimpse: The system developed by Rockefeller scientists that has given researchers the ability to study the molecular events that occur during early human development won the People’s Choice of Science magazine’s Breakthrough of the Year.

A revolutionary method developed by Rockefeller University scientists that allows researchers to study human embryo development in the lab has been voted Breakthrough of the Year by Science magazine readers. The technique, pioneered by Ali Brivanlou, Robert and Harriet Heilbrunn Professor of the Laboratory of Stem Cell Biology and Molecular Embryology, vastly expands the ability to answer basic questions about our own development and has the potential to shed light on early pregnancy loss.

Prior to Brivanlou’s discovery, very little was known about an initial stage of human embryonic development called implantation, when the developing embryo attaches to the uterus. By surrounding the developing embryo with just the right chemical environment and providing a suitable scaffolding for it to attach, the researchers managed to replicate the landmarks characteristic of normal human development up to 12 days after fertilization.

The ability to study this process in an experimental setting, outside the uterus, has opened the door to a wide variety of studies on the molecular events that occur during the very earliest stages of development. In the near future, the ability to study implantation in culture is likely to shed light on why some early miscarriages occur and why in vitro fertilization has a high failure rate. Over the longer term, the work could advance the development of cell-based therapies for a variety of diseases.

The work was conducted by research associates Alessia Deglincerti and Gist Croft, research specialist Lauren Pietila, as well as Eric D. Siggia, Viola Ward Brinning and Elbert Calhoun Brinning Professor and head of the Laboratory of Theoretical Condensed Matter Physics, and Magdalena Zernicka-Goetz, of the University of Cambridge. Zernicka-Goetz previously established a similar method to study fetal development in mice, which the Rockefeller team adapted.

The Science Breakthrough of the Year originated in 1989, honoring scientific advances that have done the most to benefit humanity, answer long-standing questions, or pave the way for fruitful research.

In addition to the selection made by the editors of Science, the event has in recent years included a People’s Choice award. This year, the editor’s choice went to the discovery of ripples in spacetime, and previous winners include CRISPR genome-editing technology, discovery of the Higgs boson, and the cloning of Dolly the sheep.